This should be fun! The whole time I was playing Psycho I was thinking about how much I was going to enjoy applying the PISSED rating to it. The game is far and away the worst game on the list so far and I really hope it sets a record that will never be beaten (mostly because I really don’t want to play through a game even nearly as bad as this one ever again). So...how low can it go?

Puzzles and Solvability
There are really only four puzzles in Psycho. How does the player open the locked doors in the house, where is the curator’s medicine hidden, how does the player defeat the ghost woman in the attic, and what is the combination to Norman’s safe? Three of those puzzles are solved by simple item hunting, while the other is pretty much based on luck. If the game worked the way it was intended, it would be finished on the first attempt by even the most inexperienced adventurer in under an hour. 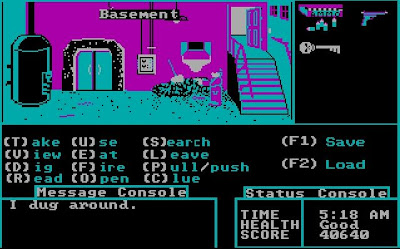 However, with the many inexcusable bugs, most players will be forced to restart their game many, many times to be able to solve those four simple tasks, and I know I’m not alone in wondering whether that was entirely intentional to make the game appear longer. In any case, Psycho can be completed in under five minutes once you know what to do and don’t run into any game ending bugs. That can hardly be called a game, and I have no option but to give a Puzzle and Solvability rating of 0. I wasn’t even sure before playing this game whether I would ever give a 0 for any category, but since I’ve already given 1’s out for this category previously, I’m left with no choice.
Rating: 0 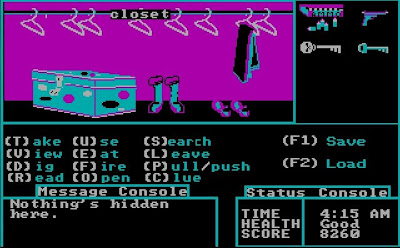 If they intentionally made the medicine's presence random, they should be ashamed of themselves!

Interface and Inventory
Let’s start with the actual interface. In all honesty, the interface is usable. It’s rarely obvious which verb actions should be used, and the game often makes you go around the long way (View, then Dig, then Search, then Take, just to get the key from the vase), but it functionally works. I never once used the Pull/Push verb though (did anyone else?). The save and load functions also work, but I have to wonder why there’s no restart option. I was forced to close my DOSBox session and restart it every time I ran into a bug (which was often). The scoring system is completely laughable, with numerous instances in the game giving the player the opportunity to earn infinite points. 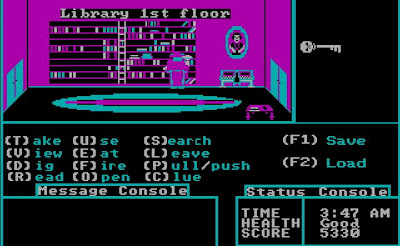 The fact that I can pick up the same clue infinite times is stupid. The fact that the clue is blank is beyond derision!

I find it difficult to describe how shocking the movement is in Psycho. Given the game is all about finding items and applying them (albeit only a few times), the fact that your movement is limited to very strict pathways through each room is ridiculous. There were lots of times where I basically got stuck, and had to move just a tiny bit up or down and then try to go left or right to escape the clutches of the invisible maze. Basically it’s the worst collision detection I’ve ever seen in a game! Finally, there’s the inventory, which admittedly has the best graphics in the whole game (which isn’t saying much). There is only room for eight items and that’s all you’ll ever find. I was unable to select or examine any of them, as they were all controlled by Eat, Fire or Use.
Rating: 1 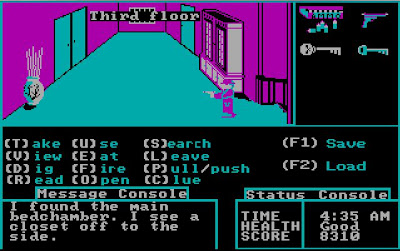 When even wide open spaces are difficult to navigate, you know you have problems

Story and Setting
Story?! What story? A detective is tasked with entering Norman Bates’ house to find some stolen jewels and free a curator. He finds a skeleton key and a tranquillizer gun to dispatch the unexplained spectral inhabitants, rescues the curator from the basement, and uses the safe combination that the curator has in his possession for some completely unknown reason to get the jewels. End of “story”! Norman Bates doesn’t even show up and nothing else happens at all. Why are there ghosts in the house and why do they do nothing but put the player to sleep? Why does shooting the first ghost woman make her disappear, but shooting the second one without shooting the first not work? Why does the detective need to complete the task prior to 6:00AM? That last one is half answered by the note suggesting someone called Max is coming in the morning to collect the jewels, but that information just creates even more questions. In the end it’s hard to care, as it’s all so stupidly handled.
Rating: 1 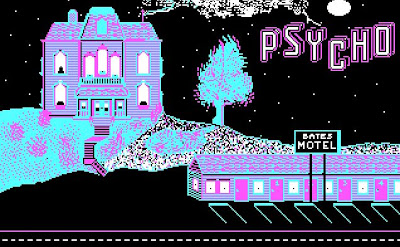 Just think of the cool adventure game you could have in this setting with a bit of effort!

Sound and Graphics
Saying there’s no sound at all in Psycho isn’t completely true, as there are some very minor effects such as when the gun is fired, but for 99% of the time the game is completely silent. That may actually be a blessing, as given the quality of the graphics I assume the sound would have been unbearable. Not only does the game revert back to the CGA palette 1 that appeared in games such as Tass Times in Tonetown, Uninvited and Shadowgate, the result is far worse than any of those earlier attempts. The main character looks like a skeleton pirate monkey and the animation is less than adequate. Below the Root was far more impressive in both sound and graphics, and given that game came out four years prior, that’s just not cool.
Rating: 1 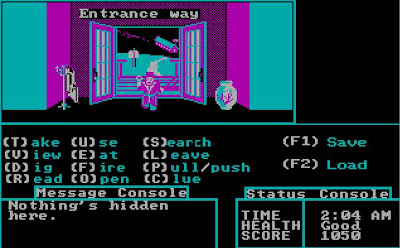 Aaarrrggghhh me hearties!!! I've come for me jewelzzz!!!

Environment and Atmosphere
This is probably the toughest category to rate overall. On the one hand, wandering a house filled with ghosts, not to mention one that contains a séance room with satanic symbols, should be atmospheric by default. But the fact the spirits of the house do nothing but put you to sleep temporarily makes their presence far less menacing. The laughable graphics and lack of sound are also highly detrimental factors, so in the end the only reason there’s any atmosphere or suspense at all comes down to the knowledge that a game ending bug could pop up at any moment. That’s hardly a reason for praise! I guess I have to acknowledge that there are some reasonably creepy scenes in Psycho, such as the knife wielding ghost woman in the bathroom and the skeleton of mother in the attic.
Rating: 2 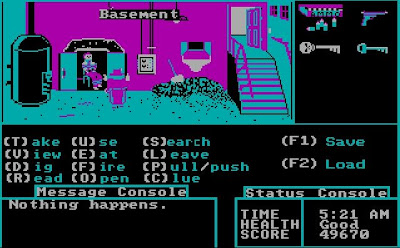 Alright, there are at least a few eerie scenes, but it really feels wrong to say anything nice about this game

Dialogue and Setting
Like everything else in Psycho, dialogue is extremely minimal. Apart from a few useless clues strewn around the house, the only dialogue is made up of one line responses to single action keys. Some of these responses are very misleading, such as the one in the kitchen that describes stairs that the character could have no knowledge of, but the biggest issue is undoubtedly the grammar. Making every room description follow the words “I found” was never going to work, and some of the results are hilariously bad. The opening scene description is “I found it’s dark and spooky out here” and the closing one is “You freed Curator & got Jewels!” I think that sums up the dialogue in the whole game really.
Rating: 1 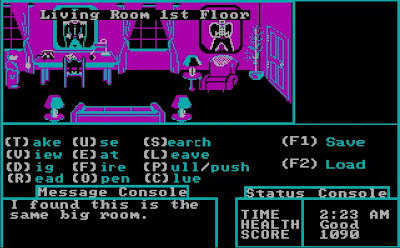 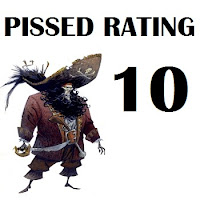 Yep, you read that correctly. I’m giving Psycho a 10! I actually think I was lenient on it too! While I look forward to seeing what Dave the Turnip is producing for the blog when it comes to rating range characters, I’m happy that I’ve finally been able to pull out good old LeChuck before the new set comes in. I’m going to have to be careful not to compare the next game, Zak McKracken, to Psycho! It will likely seem a masterpiece in comparison!


Companion Assist Points for Psycho
It’s time to dish out (and perhaps deduct) some points for those that predicted things and assisted me along the way.

5 CAPs for Charles
* 5 CAPs for half-solving the cowboy hat riddle only to be thwarted by the evil Adventure Gamer parser technology
Posted by The Trickster at 22:42