Eric the Unready – Fair and Fowl – Request for Assistance

Eric the Unready Journal Entry #4: I found myself in a fair near a fire-breathing dragon. And the dragon's protecting the Steak of Eternity. Seems simple enough - just need to cover myself from head to toe in fireproof armor and steal a hungry dragon's meal. I've got most of it covered but I still need one more item...


Hi all. Sorry for the rather significant delay between posts here. As is happening to everyone in the world, current circumstances have put all our regular routines out of order. Technically I have more time at home to play and write about adventure games but somehow it feels like I have less - the human psyche is weird. Anyway, on with the show...

After shooting out of a cannon in my last mission I landed on a fairground tent. Checking out my new location I find I'm at the St. Barchan's Day fair, and there's a herald spouting news. As usual, there's also a newspaper here.


After reading the newspaper I listen to the herald's proclamations.


Moving on, I find a chef roasting a boar while wearing a comedy apron with “Poke me with a fork – I think I'm done!” written on it. I think he wants some spices, but I'm not sure when the game's giving me a hint or just attempting a joke.


Seeing as the chef's clothing is specifically inviting it, and I do have a pitchfork in my inventory, I do what he asks.


In another part of the fair ominously named Shady Area is a three handed elf playing a shell game. 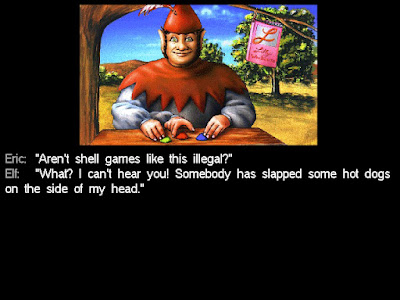 If I play, I lose. I was expecting to see some kind of animation with the shells but was disappointed when I just had to guess without having any idea. The prize is some extra minutes of life (which I assume is irrelevant to the game) and some racy woodcuts of a local dancer called Lily.

After a few turns a wandering musician strolls through. He wins the game every time, so expecting shenanigans, I talk to him.


The musician is missing a reed for his instrument so I figure he'll give me his X-Ray Specs if I find one for him.

The fair also contains a stockade with some stocks, and as I wait there a man is walked in and put in the stocks.


I didn't remember the illegality of spitting at first, but when I did work it out I felt even sorry for the poor prisoner. Anyway, even without that knowledge I immediately try to free the man, but can't find a way to do it.

After a little while he's freed by the authorities anyway, so I continue my explorations. There is a Fool's Pavilion where I can audition for a job. The three fools tell me that the jester's hat protects me from thrown objects and is fireproof, all of which will help against unamused patrons. I talk to them.


I try a few things to amuse them or cheat.


Unable to amuse the fools, I leave and check out the shooting gallery, which is run by a creepy barker who keeps making comments to and about the passing ladies. If I win his game I can have one of three prizes, so I go about getting all three.


I go back to the fool judges to impress them with my new prizes – I pull out my whoopee cushion and do what the Fonz told me I should do (I sit on it.)


I am now a fool. I'd love to go back to the knights at home and show them of my achievements!

I try to give my cap to the man in the stocks, but he won't take it. I was only trying to help protect him from rotten fruit. Anyway, the fair is fairly big compared to most sections of the game, so let's keep exploring.

I go to the Amphitheatre next and check out the schedule.


There is also a Pavilion of Tomorrow – an extremely lame pavilion of tomorrow, almost as lame as Epcott Center (Sorry Disney, I wasn't impressed.) 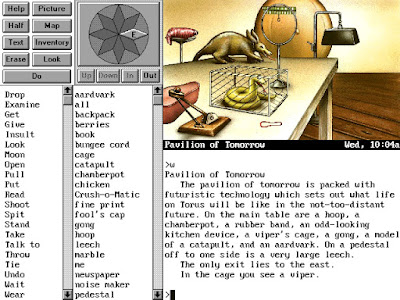 There are a bunch of items here: 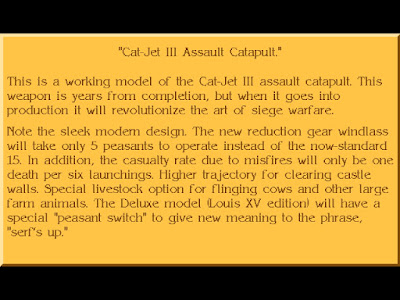 I take a rubber band, which I assume is the Iron Maiden Key Ring. I also take the leech. I try to take other things, but they are too heavy. When I try to take the catapult, it fires.


I pull the shade of the Window of the Future in order to stop the catapult from shooting the gong, then try again to get the catapult.


I try anything I can think of with the snake – putting stuff in the hole or giving stuff to the snake. I try various ways to use the weight, but the game won't let me press the lever or do anything else I try. 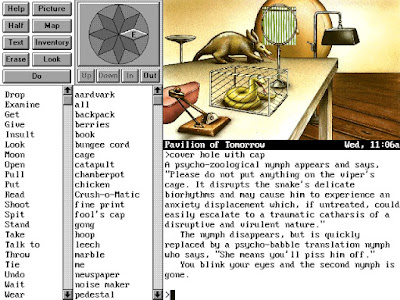 Out of ideas in here, I go back to the prisoner in the stocks and try to upset him with my noise maker.

Out of ideas at this point, I go around insulting and mooning people at random, as well as trying to use various items with various other items and trying in vain to somehow make noise with my noise maker.

At some point I finally realised there was a screen I'd missed - an exit to the west at the entrance to the fairground. I take it. 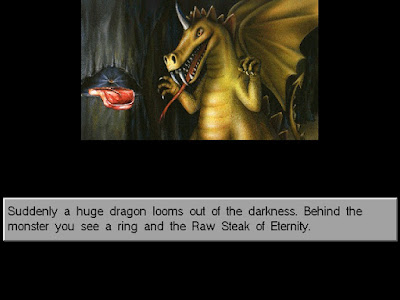 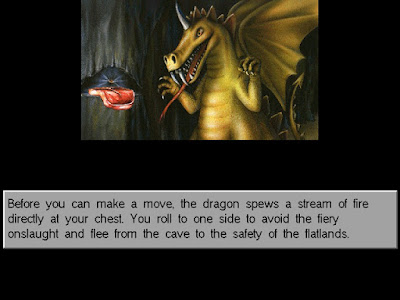 I go to the Amphitheatre and wait for the next show, which is Lily. 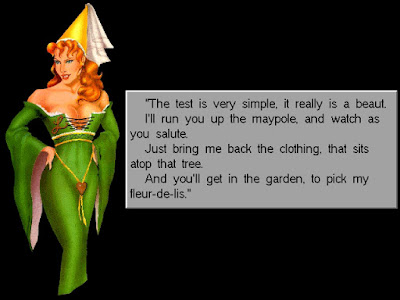 After the show, an usher gives me a note.


“I saw you out fwont duwing the show. Please meet me in my dwessing woom. --Lily.”

Accepting the invitation, I go north and end up in Lily's Dressing Room.


I talk to her, and again get reminded of the quest to climb the maypole. 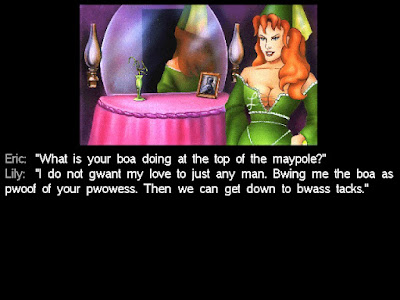 I look around to see what else I can do here.


Wondering if there's anything I need to do here by changing items a-la the T-remover from Leather Goddesses of Phobos, I keep the idea in mind and leave.

I wait around at the amphitheatre for the next show – the jugglers. The jugglers challenge the audience to toss them something they can't juggle so I look in my inventory for an appropriately unjuggleable item.


Now that the jugglers have dropped their gloves in dismay, I take a pair and look at them – the gloves have tiny suckers on them, so I wear them and try to climb the greasy pole in the middle of the fair.


I take the boa back to Lily, who's thwilled at my success, and tells me about the second part of my quest.


I take the reed to the musician and he swaps them for his shades. As expected, the shades let me see through the shells and I can win the shell game (again, without any animation or change in the graphics to show what I see)


Having distracted the barker, he doesn't take the crossbow off me as I leave so I have a new item in my inventory.

I go back to the Pavillion of Tomorrow to see if any of my new items will help. The viper doesn't want the boa and when I try to shoot anything with my crossbow I miss – including the big gong at the back of the room. I try once again to make the noise maker work, but none of the verbs worked (I even resorted to going through the entire long list of verbs on the left one-by-one)

I note that if I go back to the dragon, he doesn't always shoot fire at my chest. I'll need to protect my whole body. So far, I have sunglasses, a boa and a fool's cap to protect my eyes, head and neck. But I need an apron and the chamberpot of tomorrow to protect my chest and backside.

Because I had no current ideas on how to get either of the required items, I reload an old game to see the Story of the Dragon that I'd missed at the Amphitheatre as it only plays at 11am.

The story doesn't help me solve my current dilemma, but it does give me information about how this mission will end. The dragon who used to terrorize the countryside was finally stopped – by the power of spam! 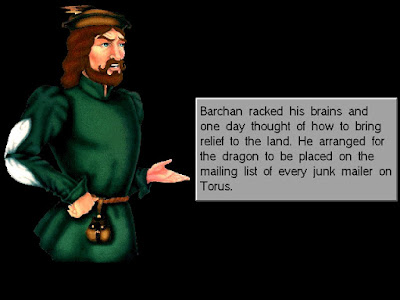 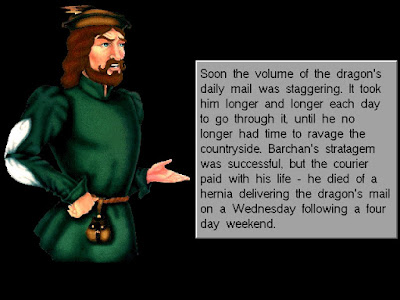 Note: This game came out before the popularity of the internet, and therefore before email spam was a thing. I'm sure if this game was made now the dragon would be getting hourly invitations to meet single dragons in his area or join some kind of get-rich-quick scheme.

Continuing to explore, I finally have an idea on how to get myself arrested. I didn't know how getting arrested would help, but I was sure it would be of some use. Listening to Harold the Herald's proclamation again reminded me about the no spitting rule so I had the obvious next thought.


I insult the people jeering at me, then a man with an apple-bearing son appear. I insult the boy too.


The boy responds to my insult by throwing an apple, which lands amongst my other possessions on a pile next to me.

I wait until my ten minutes in the stocks is up, then take my shiny new apple to the chef and put it in the boar's mouth because that's what pigs on spits always have for some reason. Pleased that his meal is now complete, the chef drops his apron and leaves with his newly appled pig.

I take the apron, and now only need the chamberpot to complete my fireproof armour.

And this is where I'm stuck.

I tried reloading to after Lily gave me the weed and went to all locations to see if the second part of her quest is actually something I need to solve rather than giving the reed to the musician. I had no luck with that, though.

I try using my stuff on things everywhere and eventually decide to wait until nightfall in case something changes when the sun goes down.


I even get desperate and ask the game for help 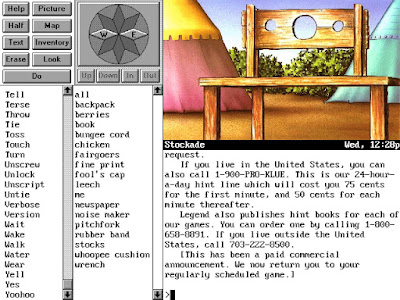 So I'm asking for assistance. I'm confident I'm near the end of the chapter but slightly disappointed I couldn't continue my plan of writing a post for each chapter. Oh well, I figure next post will have to contain the conclusion of this Steak of Eternity mission as well as the next one.

Here's what I know or suspect.