Eric the Unready – Secret of the Snooze 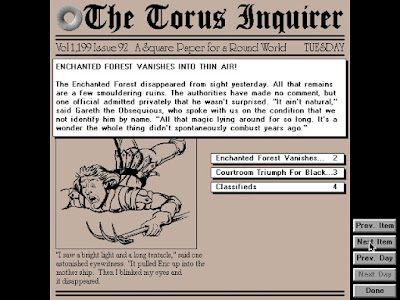 Day 4: Blicester Castle – It's Only a Model

While the previous mission spent a lot of time referencing Zork, this mission was full of references to one of my favourite comedy movies, Monty Python and the Holy Grail.

I start the day on a road next to a tavern. As always, I can't go back where I came from because the way back has been blocked, this time from a barricade.


I enter the tavern, which is run by a man named Howard Johnston. This is likely a reference to the Howard Johnson brand, which I'd never heard of until reading the comments on the previous post, but is an almost defunct restaurant/hotel chain.

On the counter is a newspaper, which I dutifully read.


The tavern has a few occupants: Howard, the key merchant; Bruce, the waiter who keeps being distracted when I ask for service; and customers, who also ignore me if I try to talk to them.


I talk to Howard Johnston the keyseller, who's convinced that eventually there'll be a Howard Johnston's on every turnpike on Torus, and that he's started serving drinks as a sideline until the core business takes off. As the real-world Howard Johnson noticed his soda fountain made more money than the main pharmacy business he'd opened and turned his company into a restaurant/motel, this is a clear reference to his business in case the name didn't give it away.

As I can't get a drink menu from the easily distracted Bruce, I try offering him the coupon from my inventory. He loves the free bard lessons I gave him and gives me a menu to hold while he reads my gift. Bruce is very much into the arts in a very 1980s stereotypical way.

Now that I have a menu, I can order lots of different drinks.


I order the grog, and in true Scumm Bar fashion, the mug dissolves before I can drink it. When I try to order a few other drinks I just drink the beverage immediately – I had been hoping to have some mead in my inventory but it seems it was not to be. I do get a little tipsy if I order a few drinks so keep that in mind in case I wish to get drunk later.

Leaving the tavern, I go in the only other direction available and arrive at Blicester Castle with it's fake French accented guards and a Trojan Rabbit outside.


The bush outside the castle is a roddenberry bush. I thought it might be a Star Trek reference, but according to a newspaper classified from a previous day, roddenberries help improve your sense of direction. I can get some berries, and if I taste them I feel my sense of direction improve. I can also try to hide in the rabbit. That doesn't go well. 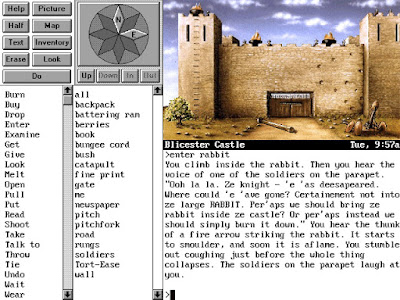 I can also get in the catapult, which results in me slamming into the castle wall at a hundred miles an hour. Like Wile E Coyote, I scrape myself off the wall unharmed. I also try climbing the rungs below the pot of flaming pitch. This also goes as well as expected, with some guards pushing the pot over - again, I survive, but the burning of the bush reveals a new hidden exit to the northwest.

Going northwest, I've avoided the castle's defenders and am now in the castle keep because the castle is only a three-walled facade.


The killer attack turtles slowly but menacingly march towards me while I look at the items on the screen. There's a proclamation with a wax seal and a key secured with a chain.

Now, those who've either played the game or are more intuitive than me will see that I made a mistake here, but let's ignore that for now and move on, shall we.

As I don't seem to be able to loosen the key from its chain, I go east and visit the stables, where the oaf who nearly ran me over at the start of the mission is sitting in his cart of branches. I talk to him, and he gives me a few jokes about his two heads, but nothing he says helps me get into the tower.


I try taking the actionable branch from his cart, but the oaf won't let me, even after I poke him with my pitchfork.

When I go back to the keep door the turtles have regrouped near the door, even though when I last left them they'd gotten closer to me - so no danger there. I climb some stairs and end up at the pot of boiling pitch. I'd be a fool to see pitch without attempting to use my pitchfork, so I have at it.


I go back to the turtles to see if they can ever get to me if I wait there long enough or if the text just keeps telling me they're getting closer but they never arrive.


And, at this point I was stuck. I tried lots of things – nothing helped, but some were amusing.


Out of ideas, I went to the old tactic of going to every screen and trying other things.


At one point I had the great idea of dropping all my items, then putting the battering ram in my magic backpack so I can take it to places I couldn't earlier. It worked, and I tried dropping my battering ram on everything (I'm still upset the game didn't let me crush the turtles), I tried burning everything with the pitch – I also tried ordering every single item from the menu at the tavern.


Anyway, now that I had a bottle, I try catapulting it at the castle, hoping it would put out the burning pitch (or make it burn brighter, as it's alcohol) but it just bounced off the castle wall and fell to the ground.

I can't remove the cap from my mead, or melt it with the pitch, but I can give it to the two-headed oaf.

The oaf heads argue with each other over whether Mead Lite is good because it has less taste or more filling, which allows me to take the branch from his cart. I take my branch up to the pitch and turn it into a torch.

Using my new torch, I melt the wax seal on the proclamation, then make an impression of the door key with my new blob of hot wax.


Pleased with myself, I get Howard the tavern owner to make me a key based on my wax impression and go back to the door. But I'm disappointed when I still can't get to the door because of the damn turtles. I try to burn them, but apparently turtles don't burn. Having not tried to use everything on everything else since I got a torch I walk around and try to burn everything I see. With Eric's history, this should be easy, but it's harder than I thought.

I was totally stuck here. And unlike last time, going everywhere and doing everything with everything didn't seem to solve my problem.

Continuing to try things, I found a new death – probably by just failing to complete the mission quickly enough.


If you're curious, it seemed my death happens after 1119 turns, or 537 turns in the current mission.

Now, I stopped playing for a while as I was totally out of ideas. It was a day later that I suddenly had a new idea. It was the situation I'm sure all of us adventure game players have had. You aren't even thinking about the game you're playing, doing something different and suddenly an idea hits your brain. In this case, my subconscious had an obvious idea that I had missed. When I got back to my computer and started the game, I reloaded to near the start of the section, when I still had my tort-ease, and used it on the turtles.


Doesn't the game know that turtles and tortoises are totally different animals? How could I be expected to solve this puzzle when they're incorrectly classifying creatures!

Shut up Wikipedia. Nobody asked you!

Having finally found the solution I'd been missing for days, I stepped over the sleeping eased tortoises, and used my wax-made key in the door. I ended up...


One of the possible prizes for winning Wheel of Torture is the Crescent Wrench of Armageddon. Are these items I'm collecting going to be used randomly like the items I collected in Leather Goddesses of Phobos? Or are they going to be used for their expected purpose as tools? I guess I'll find out once I've collected them all. Now let's go about winning this game show.

Each question does have a correct answer, and, like the game of memory in the Enchanted Forest the person I'm playing against is pretty good but not perfect. Usually all possible answers are valid and funny and there is at least one category that actually has real factual answers rather than jokes (More Weapons Beginning with "B")

It takes me a few goes, and, as many of the questions are the same and I seem to have infinite chances of competing, the more I play the more I can remember some of the right and wrong answers from before.


When I lose, I get tortured for five minutes, which isn't described by the game so is not at all interesting, then I'm sent back to the sleeping turtles to try again. After a few attempts, I win!


After the explosion of the world's largest barrel of gunpowder (another potential prize), which is really all Don's fault this time, I fly through the air to my next quest location. My fall is broken by the trampoline-like tent of a fairground that I'm guessing is somewhere near the Stygian Dragon and the Raw Steak of Eternity which I'll face next time.

And of course, we get our next end of mission cutscene. In this cutscene, the evil witch introduces Princess Lorealle to her future husband.

With Loralle's desperate plea for me to hurry, I'll need to be quick - though I've only gotten 2 of the 5 required items so she'll have to wait at least 3 more cutscenes for my heroic rescue.

Interesting that I'd been thinking about how easy this game has been and then got stuck for a decent amount of time on this one - I don't think it's that the game's gotten much harder - I think my brainpower was just not quite up to it this time. I'm still enjoying the jokes and wasn't stuck in a way that was frustrating, so good work game.