Rex Nebular - To Boldly Go Where No Man Has Gone Before

Rex Nebular's Log: Stardate - The Day The Music Died.3: I'd sometimes dreamed about what I'd do if I was a woman for a day. But in none of those dreams did I just wander around picking stuff up and solving puzzles. At least I feel a lot more welcome on this planet now. Now, let's find out where these teleporters go...

When we'd last left our hero, she'd just come out of the gender bender with a brand new gender. I'd found the gender scanner to the south, but first I continue following the carnage my friend had made on his way to the teleporter.

I find another dead guard, and her arm half a screen away. I also find a tape player. Having gotten a tape from a dead body back in the hospital, I do the obvious.

My attempts to put my tape in the tape player showed me one of the quirks with the game's interface. 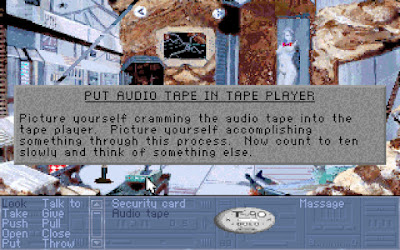 Guessing that I could only put the tape in the player if I had both items in my inventory,  I took the tape player, and then the game let me insert and play the tape.


I take the dead guard's separated arm and use it on a hand/fingerprint scanner to open a cupboard and get all my confiscated inventory back. 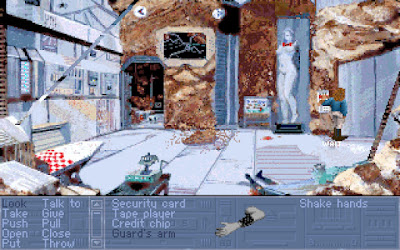 I also find a lamp in the cupboard, but don't seem to be able to take it or do anything with it. It might be important later.

Off another dead body I take a credit chip (a credit card, basically) so now I have money if I ever need it.


The next screen contains a woman (who didn't kick me this time), some chickens and a stream which blocks the way west. 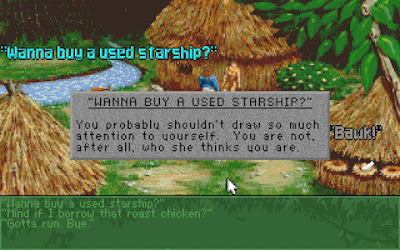 I take the roasting chicken and try to cross the stream.


This is the second game I've played in a row which had a school of piranhas in a stream by a small village. I'm feeling nostalgic already.

I try to give/put/throw my chicken at the piranhas, but the game won't let me. After picking up a new twinkifruit, I also fail to feed that to the animals.

Out of ideas on the surface, but armed with a new roast chicken, I go back through the teleporter to the underground and do some more exploring.

The southern area of the base had been off limits to me before due to my gender, but now I can pass the scanner safely and find some more rooms. This section is in a U shape, with the gender scanners on each upper section. I start at the western section.

The first door is the entrance to a bar. It's ladies night (every night is ladies night) in the bar so I enter and take a stool. The woman on the seat next to me is a repairwoman, and she starts complaining about the teleporters. I consider using the bar's teleporter until I see what happens to the lady who appears there.

I eventually worked out (after leaving the bar and coming back later because I'm extremely unobservant) that the repairwoman had a list of broken teleporters in her back pocket. For some reason I thought the arrows had something to do with the dance floor.

For now, I buy some alcohol with my stolen credit chip and continue my exploration lap.

In the south section, I find the armory which I can easily enter with my security card.


I find a TARGET MODULE, which, according to its description, should allow me to 'hit anything hard and fast if I attach it to a ship's fire control computer'. I take it and assume I'll get the opportunity to upgrade my weapons with it later.

The other thing in the room that looks like it can be used is a blimp's loading ramp. The ramp is currently blocked by a tank which I'm not able to drive. Perhaps I'll find some instructions somewhere – or perhaps it's just there to give the game an opportunity to tell another joke.


There's a few more doors in the southern section. There's a teleporter room, a lab and a storage room.

Trying the lab first, I find it's the recently exploded Professor Pyro's lab - I can tell by the large scorch mark on the floor.

I take some chemicals and check my old screenshots for the instructions for the bomb Professor Pyro had been making. I could have just played the audio tape again I suppose, but who has time for that?

Following the instructions, I make some explosives. I try to take them.


The teleporter room has, surprise surprise, a teleporter in it. (Actually it probably is a surprise - it's not actually called the teleporter room, that's just what I called it after looking inside.) I take note that this teleporter (4229) is past the gender scanner so if I need to enter this area as a man this is likely how I'll do it.

In the storage room I find some empty charge cases, which are used to pack explosives. Not a very subtle hint, seeing as I've already tried to take the explosives, but I'm not going to complain. I also find a tar bucket.


To the east is a door I can't enter for now, so I return to the lab.

I put my explosives in the charge cases and try to blow stuff up. First, I try it on the door I can't open. 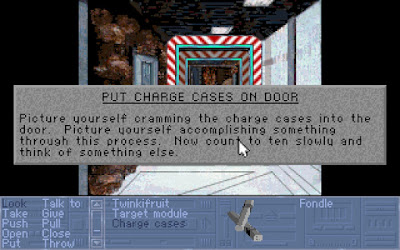 Then on the tank blocking the blimp's loading ramp. 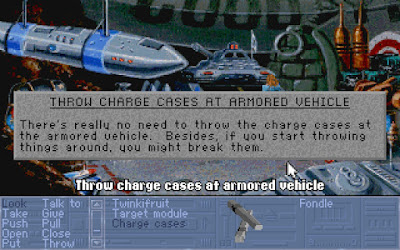 Then I try throwing them at the piranhas.

I even try making an explosive piranha meal. 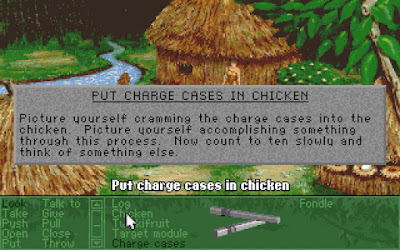 With disappointment that I can't think of anything to blow up with my new explosives, it was at this point that I went back to the bar and worked out what the giant arrows had been pointing to earlier. I snatched the repair list from the woman's back pocket and I now have a lot of teleporter codes.

That last item makes me even more confident that I can use teleporter 4229 to get to the women-only area as a man.

Seeing as teleporter 1058 is in need of minor adjustments, and I haven't been there yet. Let's see what's there.


I try the other location that needs minor adjustments and cross my fingers.


I'm now in an abandoned city and find a car, a car complete with moldy sock, empty soda cans and a long-expired air freshener. In other words, a man's car.


The car won't activate because I'm a woman, so you can guess what I'm going to do next. 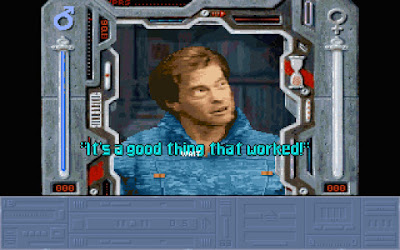 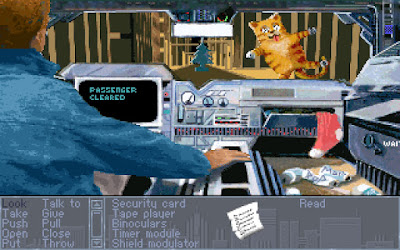 This seems like an appropriate time to stop, so I'll explore the locations in man-town next time.

Note Regarding Spoilers and Companion Assist Points: There’s a set of rules regarding spoilers and companion assist points. Please read it here before making any comments that could be considered a spoiler in any way. The short of it is that no points will be given for hints or spoilers given in advance of me requiring one. Please...try not to spoil any part of the game for me...unless I really obviously need the help...or I specifically request assistance. In this instance, I've not made any requests for assistance. Thanks!
Posted by TBD at 23:10