Rex Nebular's Log: Stardate - 13th b'ak'tun.1: I finally found my way off this planet, but it quickly became clear that it wasn't exactly how I wanted to go out - can I try again?...

I'm hopelessly stuck. Last time I reported in, I'd done some exploring in the underground men's section of the planet, and had a few things I could try, one of which I was quite proud of and planned to do immediately.

My number one plan was to flood the city by blowing up the underground sea window. But that didn't work.

I went all the way back to the cave I'd first found after escaping from the ocean. The game wouldn't let me go back in, which I liked because at least it limited the areas I'd have to explore. In the same cave I wondered if I could perhaps use some light to scare the bats in the cave. Like many things I had resorted to trying, I had no particular plan, and just did anything I could think of that might have some kind of result.

Another thought I had was that I could distract the service station's dog for longer by making the bones a lot harder to eat.


An idea I eventually had was after I read the teleporter repair list again. The teleporter in the women-only section had been mentioned as having a problem with the gender-security module. And one of the two teleporters that had been reported as needing minor adjustments had shredded my body when I went through. So I tried going there from a different teleporter, and also as a different gender.

The most clickable item in this new room are the antigrav controls.

With nothing seemingly happening by pressing buttons, I walk out of the door and see the two antigrav launch pads. 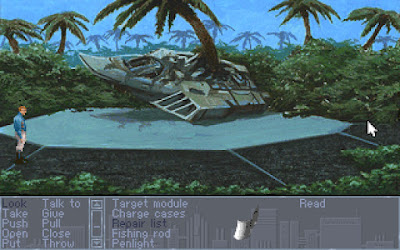 Inside the pristine ship I find a crack in the window, which the game suggests would need to be fixed if I wanted to leave the atmosphere, and a control panel with convenient empty slots for my target module and shield modulator.

Having filled in all empty slots in the panel, thus making the ship fully functional, I try to take off. The game tells me that pulling the throttle only works in low-gravity or null-gravity so I can't use the ship yet. 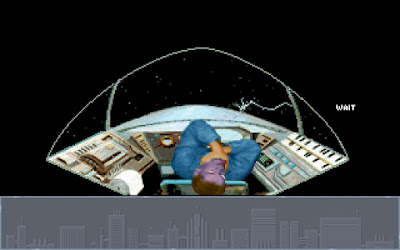 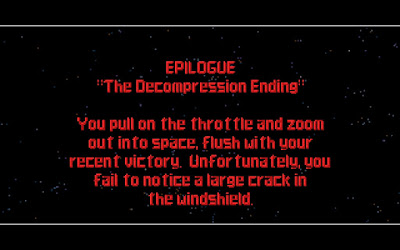 And I've finished the game with a loss. The credits roll. 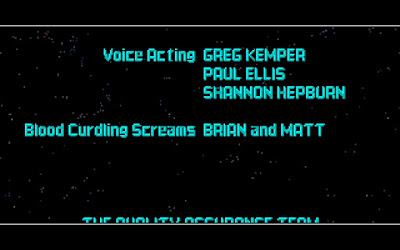 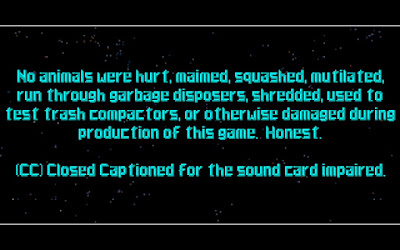 Giving me a bad ending like this reminds me slightly of some other games I've played recently. I'm clearly supposed to use this ship later. Both Quest for Glory I and King's Quest VI had me get 'bad' endings when I solved puzzles in the 'wrong' order. At least this game gave me a reason to die with the cracked windscreen rather than send me to a party before berating me for not solving other puzzles I realistically would have had plenty of time to solve before the party began.

Anyway, with the game finished, there's now a new section in the main menu. It's a "Quotes" section (yes, I put quotes around the word quotes - deal with it), which is something I've seen in some games, and contains funny things the developers said/wrote during development or just made up when they realised there'd be a "Quotes" section. 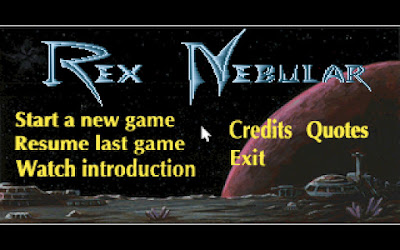 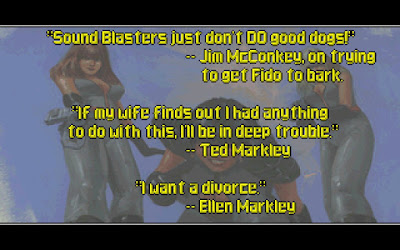 So, I've officially finished the game. Hooray?!?
Except I can't leave it at that, can I?

Let's try something else...

So, having run out of ideas, I thought I'd start the game again in Advanced instead of Expert difficulty, thinking perhaps I'd get a clue like I accidentally did earlier with the spinach leaf pit trap and EASY mode. 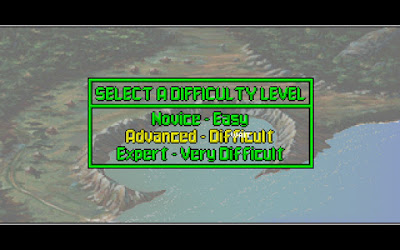 I actually didn't notice much of a difference between the two higher difficulties for a while, and when I did the difference wasn't that great.

There were exactly two times I noticed a difference.

When it came to throwing the poison darts at the monkey to get my stolen binoculars back, in EXPERT mode, I'd found a reed in the same area that the monkey was in that I could use as a blowgun.

In ADVANCED mode, the reed wasn't on the ground near the monkey. I wondered if it was something that had appeared due to my actions so I pushed, pulled and tried other things with the nearby wall of reeds hoping to knock one loose. Nothing happened. Eventually I went back to the hut I'd found the darts in.


The one other thing I found different in ADVANCED mode was in Bruce's house. I found his safe combination simply lying out in the open on his dresser. Seriously, Bruce - you might as well not even have a safe at that point.


The safe contains a key to the video store, which I can now enter.


Anyway, rather than continue in ADVANCED difficulty, I'm going to ask for help so I can solve the game at the hardest difficulty level, pretending to be the EXPERT I'm clearly not.

There's a lot of puzzles I know I'm stumped on, and possibly others I don't know are puzzles yet, and like most adventure games, I suspect solving one will lead to an item I need to solve another, etc.

Puzzles I know I want to solve:

If you know or can guess how I might solve some of the puzzles I'm stumped on, I'd really appreciate the help! Just throw your solutions in the comments in ROT13 form in increasingly specific terms, and I'll be back to solving the game in no time.

Note Regarding Spoilers and Companion Assist Points: There’s a set of rules regarding spoilers and companion assist points. Please read it here before making any comments that could be considered a spoiler in any way. The short of it is that no points will be given for hints or spoilers given in advance of me requiring one. Please...try not to spoil any part of the game for me...unless I really obviously need the help...or I specifically request assistance. In this instance, I've made a desperate request for assistance which I suspect is going to be a simple case of me not noticing something I should have. Thanks!
Posted by TBD at 18:30