Our first trip will be to Abdul's Service Station, where we find a small barking dog.


I of course start by trying to befriend the dog by giving him some bones I found on the surface.


After the dog systematically turns me into a small pile of blue goo like a hungry land piranha, the death screen tells me I shouldn't have gotten so close to him. In response to that hint, I use THROW instead of GIVE.

This doesn't solve my dilemma though. The dog devours the bone as easily as it did me and continues waiting to kill me if I get close. He won't take my twinkifruit or my chicken so I ignore the side door behind the dog and look at the rest of the area.

There is an air hose here. It seems the garage was for old-fashioned cars with tyres rather than modern flying cars (MLV's). And there's a sign that points down – I don't know if that means anything or not at this point. There's also a manhole I can't open.

The next location I visit contains a viewport with a curious sea monster behind it.

I try to talk to the monster.


I look around to see if there's anything else useful in here.


/ˈɛpɪθɛt/
noun: epithet; plural noun: epithets
an adjective or phrase expressing a quality or attribute regarded as characteristic of the person or thing mentioned.


Well that clears that up perfectly!?!

Sometimes the creature sticks its tongue out frog-like and hits the window with it.

There isn't anything else here obvious enough to interact with, so after trying a few things I move on.

In this area, the car stops outside a place called “Bruce's”. I enter and explore what seems to be Bruce's interestingly designed house. Apart from the unusual colour scheme and decorations, Bruce has a wall safe.

Looking at things in the two rooms of Bruce's house, it's obvious he's a cross dressing entertainer, and a very popular one at that. I hadn't thought of it before, but this makes a lot of sense in an all-male society. They may not trust women, but they still want to see people who look like women so cross dressing entertainers would be very popular.

I take the only takeable item I find in the house, a compact case, which seeing as it comes with the verb “REFLECT” I suspect will be used as a mirror at some point. 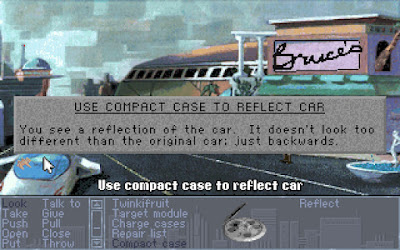 I can't find anything to do here yet. There's a card slot outside an elevator but the only security card I have is from the women-controlled section and likely won't work here. I save my game and try anyway, expecting a gruesome death.


Things to do later:


Noting the precariously suspended boat above the entrance, I enter the Sand Bar first and take a fishing rod from the wall. 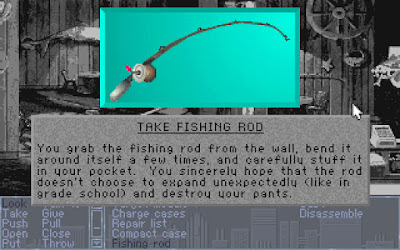 I also take a padlock key out of the cash register.

Back outside I get a hint that I'm never going to be able to enter the Pleasure Dome.

This screen has lots of buildings to interact with. Or so it appears at first. The air bike is disappointingly too rusted to use and I can't enter the hotel or restaurant.


I can enter the software store, so I do.

I take a penlight from the counter, which I can disassemble to get batteries.

The other enterable shop in the area is the laboratory. It contains a large laser and one of the more lazy attempts at referencing current-world items, a 'spinach patch doll'

I can turn on the laser, which much to Rex's delight obliterates the doll, but I can't turn the laser off. I try to throw my explosives at them, but I'm not allowed - I'm sure there's something I'll need to use the laser for, and I'll find out what soon.

Well, this is just the area I started at where I first found the car, so let's move right along

The winch controls are behind a padlocked panel. I have a padlock key in my inventory. I wonder if those two items could be used together...

The newsstand just contains old newspapers talking about the women working on biological weapons. I try to enter the video store.

Now that I've visited all areas at least once, I go back to the sand bar to see what I can get out of the boat that I'd dropped.

I couldn't find anything to do with the boat or anything useful in the boat. But while looking through my inventory I had another thought and went back to the laboratory.

Remembering the compact mirror I took from Bruce's house, I used it to reflect the laser beam. 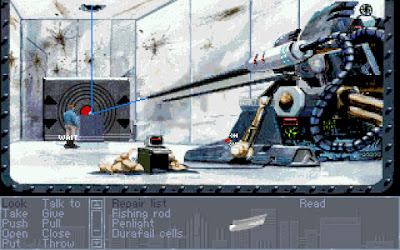 Getting back in the car and looking at the map, it seems the residential area is the closest to being directly above the lab. So let's go back there and see if we're right.

Well, it seems like if I could find a second mirror I could direct the beam to Bruce's safe in order to get what's inside. But trying to take, push or pull the vanity mirror from the next room doesn't work so I forget that idea for now.

Before doing more detailed exploring of this city I have the brilliant idea of using my fishing rod to get the piranhas out of the stream in the village above ground. I spend a bit of time and teleport back to the women's base, bend my gender again and try out my brilliant idea.

So let's stop for now. I have a few things I can do next time I play. Apart from the short 'things to do' lists I have above, I've since thought of something to do in the NORTH SEA WINDOW section. I figure I can flood the place. As for how or why I'd do that, I have an idea...


How - put/throw my explosives on the sea monster's viewscreen?
Why - I frankly have no reason to want to flood the city other the fact that I dropped a boat that seems to have no purpose without water.