Rex Nebular's Log: Stardate - Later That Afternoon.3: I've been captured by a group of women. One of the woman keeps referring to me as scum - which is strange because usually people spend at least a few minutes with me before realising I'm scum. It seems the women want to use me as breeding stock. I'm in great peril and need to escape as soon as possible. Or maybe I should stay and have just a little bit of peril first.


When I last checked in, I'd just teleported to a facility and been met by two women, one of whom had a gun pointed at me.

The women take me on a small tour through their complex, or not so much a tour as a direct line to the prison. 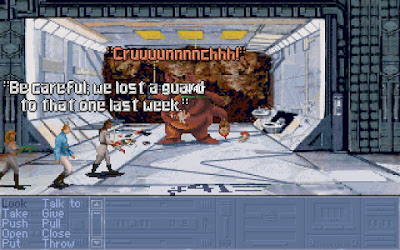 After the ladies set up the force field to lock me In my cell, I hear a noise from the other side of the wall.


The voice was coming from my neighbour, a creature named Bud. His story is similar to mine – he had been investigating some strange readings before being blasted by a cloaked ship and taken from his escape pod a month ago.

Bud tells me a little about the place. It's underground, the female humans here are called 'Keepers'. The female humans above ground are referred to as 'Stock', meaning breeding stock, there was at some point something called 'The Great War' which he suspects has something to do with the lack of men.

I promise to help him get out of here and in return he promises/threatens to kill any guards between here and the teleporter. After looking at my surroundings a little, including noticing the Rex-sized air vent, the women come back.


I'm taken to a 'hospital' and prepared for my 'examination' by Doc Slache's assistant.


I find out that I'm going to be used to continue their race by constantly breeding with the ladies.


She tells me about the Great Gender War and the Gender Bender. The Gender Bender is a machine that changes a user's sex. They put one of the surface-dwelling women into the machine to continue their race when they can't capture real men such as myself. The Gender Bender's effects do wear off after some time, but the time it lasts in unpredictable. I expect this unpredicability might be the catalyst for puzzles and/or humour in my near future.

After the intern leaves I have time to take a scalpel from the nearby trolley before the Doctor arrives. 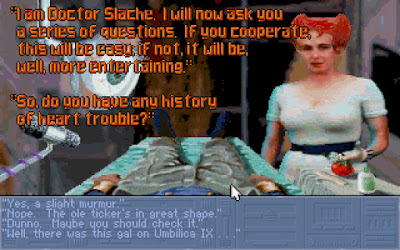 After a few deaths I stop using the fun answers and answer her questions sensibly. After a few questions she introduces me to Mr. Hypo and I fall asleep.


I wake up back in my cell where I use my scalpel on the air vent's grate and enter it, which shows me a small map of the vent system. I can check out the other cells and talk to my cellmates or I can exit into the security room. There doesn't seem to be much to do here so having a separate screen for the vent makes me think it might just be the first of numerous vents I'll have to climb through in this game? Then again that's likely just my fear of mazes manifesting itself as the interface here is as simple as clicking on the room I want to go to. 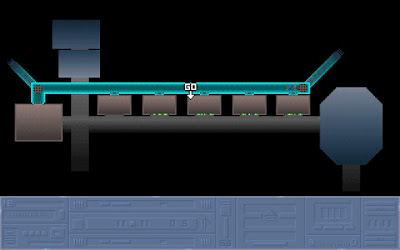 I exit the vent into the security station. Apart from the obligatory old cup of coffee and half-eaten doughnut, the desk contains a monitor with camera views from the cells and from the village on the surface. Looking at cell 2 gives me some interesting information.


I open all cells, and a guard appears and points a gun at me, getting ready to shoot me. Before she can pull the trigger my new friend, Bud, comes through and violently takes care of the guard.


I leave the security station and go to the monster's cell. Bud had totally ripped the monster apart (Bud's more powerful than he looks - that monster seemed strong) and I find the security card amongst the carnage.

Moving past the cells to the hospital, I take an audio tape from the smoking body of Professor Pyro. 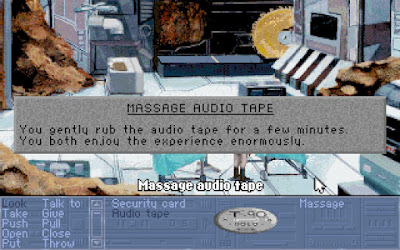 Moving on, I find some kind of force field that I attempt to move past. 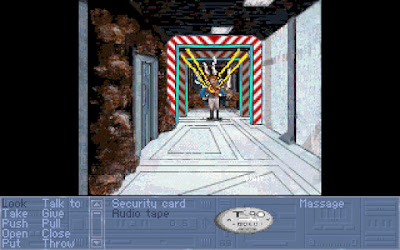 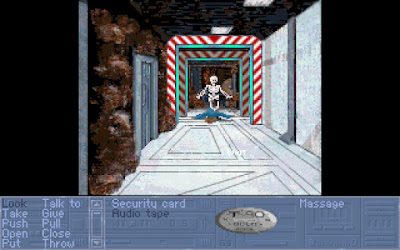 Looking at the scanner after dying gives me an important clue.


Not being able to go further in this direction as I'm not a woman, I try the other direction and find a strange machine which looks like a pool cue hitting an 8-ball. Stepping onto the platform activates the machine.


Well, now that my gender has been bent, I'll be able to pass the security screen past the hospital. But first, I look around a bit.


So now that I'm a woman I should get a bit more respect around here, assuming anyone's still alive to show me some respect.