Much like a previous game I've played, Leather Goddesses of Phobos, the title of this game has me forming an opinion on the type of experience I'll be having before I even start. I'm expecting, again like the previously mentioned title, a space comedy game with many jokes and situations somehow related to sex. Will I be right? I feel confident I'll be right.

The game was developed by MPS Labs, a development division of Microprose Software Inc.

Rex Nebular and the Cosmic Gender Bender was MPS Labs' first adventure game – the company had previously mainly concerned itself with strategy and simulation titles, the most famous of which is undoubtedly 1991's Sid Meier's Civilization.


Apart from the MPS regulars, one name of note in the credits is Steve Meretzky of the Leather Goddesses and Spellcasting series, among others. In this game he's credited with Rex's Log Text, which is a 23 page booklet included with the game. I'm not sure if this contains any useful information, but it's definitely a bit of funny flavour text.

MPS Labs did continue to dabble in the adventure genre after this with 1993's Return of the Phantom and 1994's Dragonsphere. Those games also used the engine MPS Labs created for this game, the imaginatively named Microprose Adventure Development System (MADS)

I've chosen maximum difficulty and naughtiness mode. I'll be keeping this playthrough rather family friendly throughout, but based on my Leather Goddesses experience, I don't think even the maximum naughtiness level will be quite as naughty as it wants me to think it is.

Now, let's take a look at the opening cutscene, which is a rather lengthy 8 minute sequence.


At the start of the cutscene, a ship appears upside down and immediately rights itself before taking off.


The spaceship, presumably containing our hero, lands... somewhere... and Rex walks across a platform while an observer watches on.


Rex approaches a guy's office and gives him a purple vase before demanding he get paid handsomely for the job he just did. When asked if getting the item was hard, Rex responded.


In the flashback, Rex sends a probe into a swirling sphere. As he approaches the sphere, his ship takes a hit and a cloaked red ship appears. Rex tries to talk his way out of the situation. 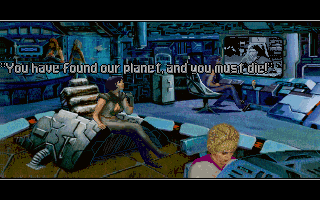 The Captain of the red ship orders the smaller vessel finished off and Rex's ship, named the Slippery Pig, plummets to the planet below and sinks to the bottom of an ocean crater. 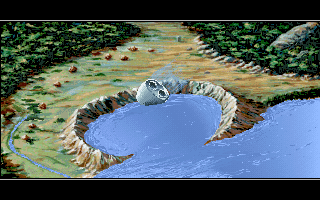 And we'll see what happens when Rex stands up in our next exciting visit to Rex Nebular's world.

Though I've only seen the opening and checked out the manual, I've enjoyed the humour so far and feel like I'm in for a fun comedy space adventure. Don't let me down, MPS Labs. I'm counting on you.

The animations have also surprised me with their number of frames. The characters move quite a bit more than I'm used to in games of this era. Though it's possible that level of movement is just for the opening rather than the entirety of the game.

On a personal note, not only have I not played Rex Nebular before. I hadn't even heard of the game until it appeared on our list. I'll find out soon if the game is worth remembering or if it's best left forgotten.

And, as always in an introduction post, get your Final Rating guesses in and any game bets you may have.

Note Regarding Spoilers and Companion Assist Points: There's a set of rules regarding spoilers and companion assist points. Please read it here before making any comments that could be considered a spoiler in any way. The short of it is that no CAPs will be given for hints or spoilers given in advance of me requiring one. As this is an introduction post, it's an opportunity for readers to bet 10 CAPs (only if they already have them) that I won't be able to solve a puzzle without putting in an official Request for Assistance: remember to use ROT13 for betting. If you get it right, you will be rewarded with 50 CAPs in return. It's also your chance to predict what the final rating will be for the game. Voters can predict whatever score they want, regardless of whether someone else has already chosen it. All correct (or nearest) votes will go into a draw.
Posted by TBD at 23:25