Jason Roberts Journal Entry 4: Determined to get inside a treehouse, Maya and I decide to attempt some acrobatics. Will we find the Swiss Family Robinson inside? I can only hope...

When we last left our heroes, they had just followed Professor Stroheim's directions and found a treehouse in the jungle. We'd made a see-saw, but the game didn't let me do anything with it (or so I thought).

I'd tried walking up it, but it merely seemed like I was walking behind it (perhaps another example of my poor skill at navigating in a 2d perspective.)

I couldn't climb any of the trees, including the stump. I'd tried everything with both characters, including using all my items on all the items on the screen. Eventually I accidentally found the answer.

Why did it take me 26 minutes to work this out? I blame the unclear interface.

Putting the plank on the rock never makes the plank a usable item. In order to try exactly what ended up working, I'd tried CLIMB ROCK. I'd tried moving my character along the plank to see if that worked. I'd tried climbing the stump.


Anyway, I was on the platform now so I should stop complaining. Navigating the rest of the treehouse section is quite straightforward.


As I enter the treehouse, Maya exclaims, “By the Gods!” and the chapter ends. 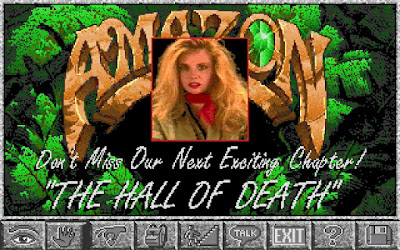 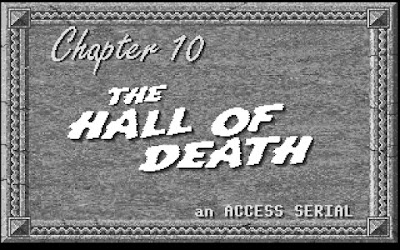 This section is fairly straightforward as well. One of the skeletons has a key on his neck. I use it to unlock the chest which contains a scroll – the diary of a conquistador.


The journal ends with the promise that the hellish creatures shall not have the final emerald.

I use my machete on the vines to expose another conquistador skeleton. I then use the machete on his breastplate to break it. Then I find out what the conquistador did to protect the emerald.


At this point I'm thinking of the chapter title and realising that this straw hut is supposed to be the titular Hall of Death. It's not even a hall - it's a treehouse. Name your chapters better, Access!

I take the emerald, and Jason and Maya walk back through the same part of the jungle to return to Stroheim.


With one of the 'eyes of the jaguar' and proof of Valesquez' final resting place, Stroheim tells us what he knows.

It's off on another canoe ride. This ride lasts 12 minutes (I think I'm getting better at navigation.)

Then I arrive at Allen's campsite. I loved being able to visit the location of the opening cutscene. It adds to the realism by making the cutscenes more part of the gameplay. Well done, game! 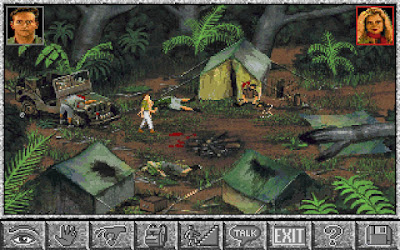 In all the time it took Allen to be nursed back to health, write a letter than got to Jason, then for Jason to travel to and all around South America until he found this location, I would have thought the local animals might have done more of a number on the dead bodies.

We get another “Meanwhile” cutscene of the game's bad guy, Sanchez. He's whingeing to his corporal about Jason and Maya getting away at the Bridge of Death. When Sanchez is told that they've been seen at the old campsite (by who?) Sanchez smiles, “Now we have them!” 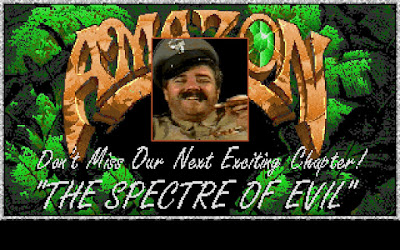 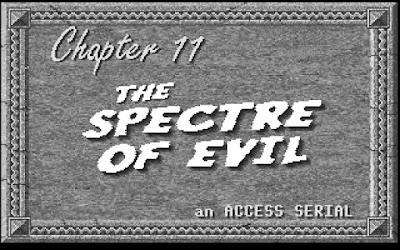 Looking around the campsite, apart from the dead bodies and tents, I notice a chain, which I take, a tarpaulin covered by a large log, a gas cap, which suggests I'll need to put gas in the jeep, and a box that contains a geiger counter.

One of the bodies is holding some car keys – I take them – now I have two sets of car keys!

Closer examination of the jeep shows that it contains a winch. 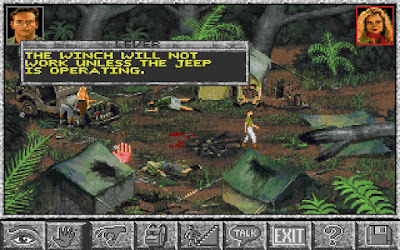 In one of the tents I find a jerrycan full of gas (I still miss my old lime-encrusted jerrycan) which I use on the jeep before replacing the cap. I turn on the ignition and move the winch lever. Jason puts the cable over a tree so the cable conveniently ends just over the log. I wrap the chain around the log and attach it, then activate the winch to raise the log so I can move the tarpaulin. What's under the tarpaulin? 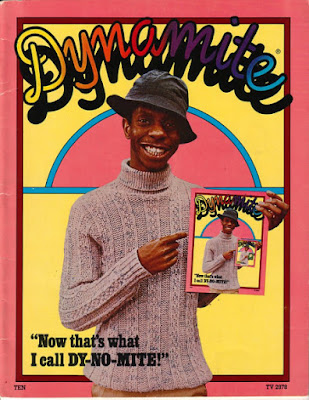 Taking the dynamite, I exit the screen. After another 13 minutes of canoe paddling/dying/reloading, we finish our trip at a waterfall. 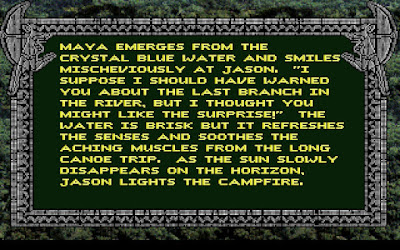 Ignoring the evidence that Maya was clearly not a member of this tribe, I listen to her story.


After the talk, Jason and Maya sleep. In the morning Maya takes a shower under the waterfall, and they have some visitors.


Sanchez and his two backup dancers fire their guns, and Maya screams and drops.


With Maya shot by Sanchez and his henchmen, Jason calls out in concern, and our chapter ends. 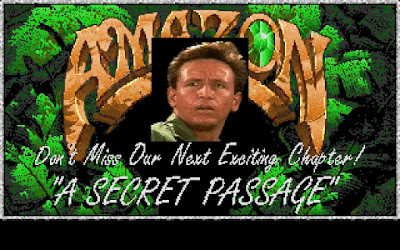 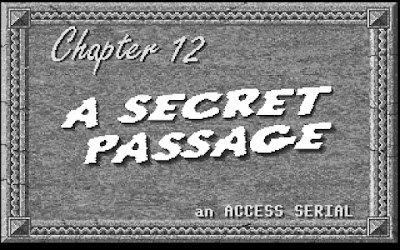 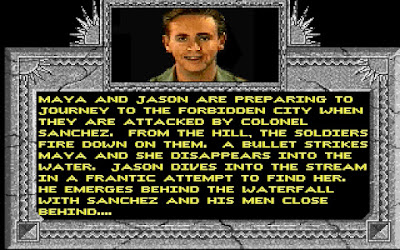 The chapter begins with Jason behind the waterfall. There are some vines on the wall and a tree limb. And, oh yes, a trail of blood. 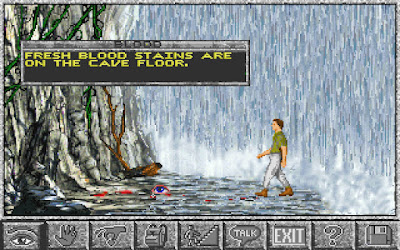 Moving the tree limb opens a secret wall/door section. On the secret door is a carving of an arrow. 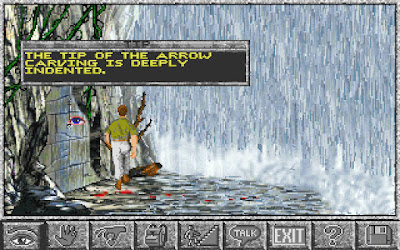 I don't get time to do much in this section because it's (you guessed it) another timed sequence that kills me so I can't waste my time looking at things like a normal adventure game.

One thing that would help make this game's reliance on constant death be less tedious would be a simple game over screen offering a restore game option like the Sierra games have, or an automatic reloading of my last save game. Instead, the game just starts again with me driving to work on Day 1 and I have to click on the floppy disk icon to get to the save/load menu.

Anyway, I kept trying things in this waterfall screen, and kept dying and seeing myself drive to work.

Thinking about the arrow carving convinces me I'll need to poke an arrow into the indentation, but I don't have an arrow in my inventory. I think of a few likely places where an arrow might appear, so I start reloading old save games. The campsite doesn't have any arrows, and Maya even comments when I look at one of the bodies that the arrows have been removed.

The other likely location is the treehouse where there are two very obvious arrows coming out of one of the skeletons. Unfortunately for my I need an arrow theory, they aren't clickable items according to the game. I try to take or move the skeleton they're sticking out of, but that doesn't do anything with the arrows either.

So maybe I don't need an arrow. I go back to my current save and I try poking my knife at the indentation, as well as my car keys.

Looking at my inventory, I wonder where my geiger counter and emerald are. Did Maya have them with her when she was shot and staggered through the secret door? Unlikely, as she was showering naked? Did we lose them in the waterfall? Did we give the emerald to Stroheim rather than just showing it to him as I'd thought? Was I supposed to use the geiger counter back in the campsite? I tried doing that, going back and geiger countering things. There is radiation all around the forest, but nothing useful seemed to happen by finding that out.

I also try using my lighter with my explosives which lights them. I had been hoping I could throw my lit explosives through the waterfall at the approaching bad guys, but I had no luck with either that or blowing up the secret door. I was even mildly disappointed I didn't explode and still died by getting shot by Sanchez' men. Hopefully they at least blew up when getting close to my body.

And with that, we'll finish off for now. I'm close to the end - I know the game has 14 Chapters and I'm in Chapter 12 so once I find a way to enter the secret passage I'll be approaching the endgame. I'm looking forward to it for two conflicting reasons.
I'll be back next week where I get to the endgame (barring getting hopelessly stuck again.) See you then.