CHAPTER 1: TERROR IN THE JUNGLE (continued)

After the opening cutscene we went through in the introduction post, we start the game with Jason Roberts arriving at work. As always when starting a new game, I look at everything I can see.


Looking at the green (sorry, olive drab) car's trunk tells me it's locked. I make a mental note to try to steal the key from the owner (Darlene) at some point, as leaving anything locked just isn't done when playing an adventure game.

I enter the office. I find it much easier to navigate by using the arrow keys rather than the mouse so I'm glad the game gives me that option.

The most useful looking item in the first part of the office is a wire coathanger. I take it.

After a few attempts I get the option to ask about a key to a locked cabinet in my brother's office. I haven't been to any of the offices yet, but now I know I'll need a key – the game doesn't assume I have information I don't yet, as Jason specifically mentions seeing the cabinet 'the other day'. Having not gotten anything too useful from Darlene, I decide to enter one of the offices.


My office contains various scientific apparatuses, and a brown rat in a cage.


I take some alcohol from my cabinet (not the fun kind of alcohol) and talk to my rat.


My intercom has a message that calls me into the boss' office. So I enter my boss' office at the end of the hall (MOVE CLOSER). My boss inexplicably turns his back on me before telling me about my brother's mysterious disappearance. He tells me to go home and rest after hearing the bad news.


Not having to be told to take the rest of the day off twice, Jason drives straight home.


Just inside my door is a brown package from South America. I try to open it.


I take the letter opener from the table and open the package.


I pick up the letter and am amazed - I can tell I'm amazed because of the amazed look on my face. And thus we come to the end of Chapter 1. 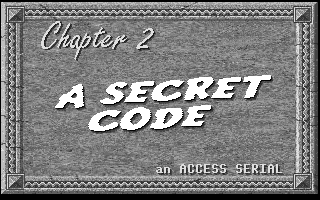 The letter I was shocked to read at the end of Chapter 1 was from Allen.

I'm somewhat surprised that the letter was from after the expedition was attacked in the opening cutsene. So now we know that Allen definitely wasn't killed in the attack. In the letter, Allen gives us a lot of information and instructions on how to proceed.

Not finding anything else in my house, including the decoder ring, I go back to work and enter Allen's office. I take darts from Allen's dartboard and a blowgun from the wall. I use Allen's key to open his cabinet, and take a reel to reel audio tape. I read Allen's journal and take it.


I take a movie reel and put it in Allen's projector, pull down the screen and turn the projector on. It doesn't seem useful - it just plays a short silent film called “Wild Women of Wongo”. I find a book that gives me instructions to make a love potion. I have alcohol from my office and Allen's office contains the other ingredient – a jungle weed known as “the heart”. I can boil the mixture in my office where I previously noticed I have a bunsen burner.


The jungle weed I need is in a locked cabinet (different to the unlocked cabinet I used Allen's key on) so I go to Darlene to see if she'll help me. Darlene is very upset...


Using our shared grief, I attempt to get Darlene to give me the key. 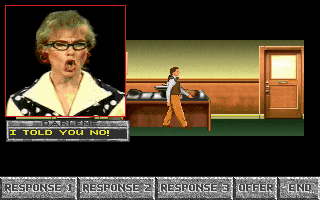 Ignoring the cabinet for now, I attempt to go to the office's security vault. To my surprise I found that the door leads, not to another office, but to a backyard with an extremely secure looking mountain entrance. Being a valued employee, I attempt to enter.


Instead of making my way nonchalantly to the vault, I look at my surroundings – looking at the male guard tells me his life is missing the love of a good hearted woman. Looking at the female guard gives me an even more blatant hint.


Well, I now know why I'll need the love potion instructions I found earlier – I have all the ingredients apart from the jungle weed that's in my brother's locked cabinet. I go back to my office to see if any ideas hit me. One does – I look at the rat in my cage and remember that the secretary, Darlene, hates rats (much like a woman from an early sixties sitcom.)

I open the cage and take my rat, letting him loose near Darlene. She screams and runs away.


I can't do anything with the items on Darlene's desk, but I can open the key cabinet and take two of the keys, the keys to Darlene's car trunk and the key to Allen's cabinet. I can't take any of the other keys.


I take the jungle weed from Allen's office cabinet and then go to Darlene's trunk, where I find some more useful items.


I combine the alcohol and jungle weed in my inventory, then put the combined liquid on the bunsen burner until it goes green, as the instructions stated.

I then use my dart with the liquid, and the blowgun with the dart to make a “loaded blowgun”. I go outside, ready to hit my good friend, Male Guard, with love potion #9. The game tells me I can't see him from where I stand, so I climb a tree stump. I then get told I don't have a clear shot at him. As he walks around the area I try multiple times. I get told I don't have a clear shot a lot, and try to think of something else I need to do – I attempt to use my bolt cutters on the branch in front of me in order to get a clear shot but that isn't the solution – there's a very small window of time where the guard is in the perfect position and I eventually find it and shoot Male.

Then the game goes all Looney Tunes with a closeup of the guard.


Now that Male Guard in in drug-assisted-love, the two guards walk hand-in-hand to the bushes shortly before some clothes and something small fly out. I hear occasional happy sounds from my friends, Male and Female. As I walk towards the clothes, a bear wanders in from the right, and goes to the garbage bin.


I reload to before I shot the dart and go back to all previous locations looking for a sandwich or something else that would count as bear food. I didn't find any food, but did find that someone else had been to my house while I was at work.


On the bright side, one of the pixels on the screen is alternately glinting red and yellow. Ignoring the possibility that my monitor's faulty, I look at the pixel and find my Orphan Annie Decoder ring. I can now use the ring to decode Allen's secret message. 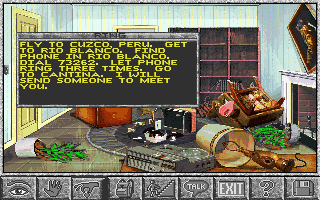 Having not found any bear food anywhere, I go with the other idea I had – I use my bolt cutters on the chain holding the garbage can lid on. That works, as there was already food scraps in the garbage. While the bear rummages through the garbage, I take the small item next to the thrown clothes (the key to the vault) and use it on the vault door. I enter the now open door and am greeted by a security robot called Bob who says in his robotic monotone, "The intruder must be terminated" before the episode ends. 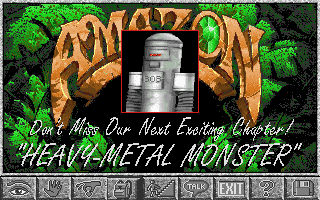 And, with two chapters down, we'll stop for now. Next time I'll attempt to deal with the Heavy Metal Monster.