When we last left Alexander, he'd slept through the opening credits and awakened on a beach in what we assume is the Land of the Green Isles.

Following my usual M.O., I start by clicking on things with my 'eye' icon. I notice that if I look at things that don't have descriptions I get a description of the area itself.


I go north, and find a tree with a hole in it. There is nothing in the hole and talking to it gets no response. I make a mental note to remember this hole as I expect something will happen with it later.


I like that I can see what I'll find if I take one of the potential exits – there's a town to the left and a castle to the right. I decide to try the town first.

The shopping district of the town consists of a bookstore, a pawn shop and a lamp peddler who occasionally shouts out his salesman pitch.


It turns out this guy is banking on eventually getting a lamp with a genie in it to make him an instant millionaire. And now that he's told a potential sucker his plan, I'll be sure to rub every lamp I find from now on just in case. Then I'll happily sell him a lamp with an expired genie inside!

I check out the pawn shop next.


He lets me know that I AM in the Land of the Green Isles. And when I tell him I'm looking for Princess Cassima he tells me she's on this very island, in the castle I saw to the east.. This quest's going to be easier than I thought.

He also tells me about the unrest currently befalling the Land of the Green Isles. The ferry that travels between the isles isn't working – and with limited communication, the isles have learned to distrust each other... or something like that

He also sells items – four items, to be exact.


Let me make some rather obvious predictions – some animal will need a flute song to be calmed and I'll need to convince some creature that a nightingale is somewhere to distract them so I can sneak past. I'll also either meet a painter without a brush or need to paint something myself, and I'll need light, or a fire at some point.

Like the lamp peddler, this man won't accept money – all of the four items are of equally slight value and he'll trade for an equally almost valueless item – and at first glance it seems like once I get one item I can keep exchanging it based on need. This seems like a way for me to change purchase decisions without having to reload a saved game. Is Sierra starting to make decisions that help AVOID dead-ends rather than creating them? My hopes are high at the moment!

At the bookstore I find a bookseller (surprise!) and a creepy old man in a black robe.


The old man in the robe won't talk to me so I sit down and read a book about jesters. After a refreshing read, I talk to the merchant.


He tells me that the island I'm on, the Isle of the Crown, consists of this village, the castle and the docks. It's good to know about my surroundings.

He tells me a little about the other three islands as well; the Isle of the Sacred Mountain, the Isle of the Beast and the Isle of Wonder. And there is a legend of a fourth island - I immediately feel that I will be visiting this legendary fourth island. As for why he isn't counting the island he lives on as one of the four islands, I have no idea. Is this the zeroth island? Anyway, the merchant gives me a tip on how to find more about each island.


Searching through the books, I find a poetry book with one poem in particular that makes me think of Cassima.


That poem 'accidentally' fell out of the book, so I take it.


I look through the other shelves, but find nothing of interest.


There is one book of interest on the counter, a book of magic spells, which the man will only part with for, say it with me people, the trade of something of approximately equal rarity and value.

As I'm leaving I note a book on a small table at the entrance. The table has a sign on it that reads, “Take one, PLEASE” along with the crossed out previous prices of 10 pence, 5 pence, 1 pence and free. I have a feeling that this book is somehow cursed, but I take it anyway.


Past the village is a single house with a large front yard. A woman seems to be gardening, but as I approach, someone opens the door and starts berating her.


I try to see what is going on in there, but Alexander refuses.


It's easy to do something dangerous after saving the game, so I save, then jump in. 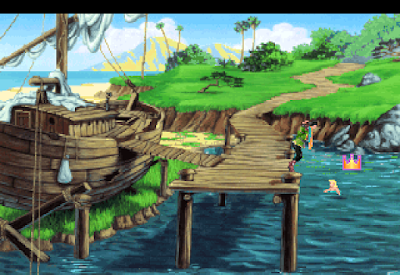 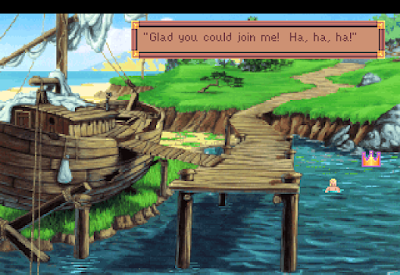 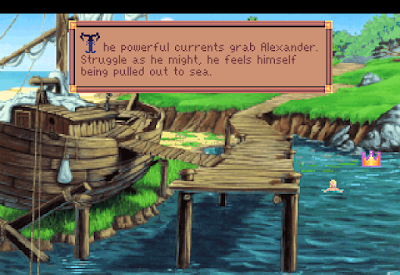 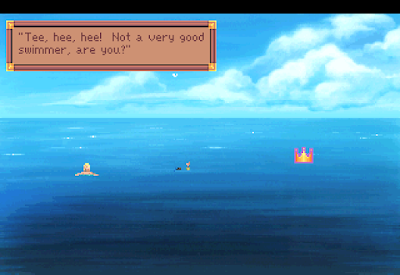 I note that the death sequence has my ghost walk past some skeletons. I'm making another prediction that I'll be entering this realm without a game over screen at some point.

Reloading the game, I don't jump in with the merboy. After a few more requests for me to join him, he disappears in a puff of smoke. Alone on the dock, I check out the ferry on the grass next to the dock. I look at and try to take every part of the boat I see.


To my surprise, the ferryman is still in the boat. He invites me in, purely because the bookseller told me about him. He looks a bit gruff and unpleasant, but is a surprisingly nice guy. Before getting into deep conversation, I look around his ferry.


I can't take the lamp, so I talk to the ferryman. He tells me more about the islands.


He tells me that Princess Cassima and her mother, Queen Allaria, used to use the ferry often. They would travel to the islands and take care of the needy. Last time they travelled, Cassima returned upset and the Queen and Princess were talking about someone spreading lies. In general, the ferryman is very impressed that the royal family served the islands, rather than the other way around.

He also mentions that even if he were allowed to travel, his ferry's no longer seaworthy. But there's another way to travel between islands.


When I look at the rabbit's foot on his table, I say something stupid.


He offers me his rabbit's foot because it's brought him no luck, and before leaving I try to take everything else I can see.


Leaving the ferry, I go back past the town to the castle, hoping to see my beloved Cassima.

The castle is guarded.


I tell the guards I'm a prince, but they won't let me in without proof. I show them everything I have but nothing impresses them.

I follow the path to the side of the castle and find some vines on the wall. Unfortunately I can't climb them.


And at this point I was stuck. I didn't know what to do so I tried exploring everywhere I'd been, clicking on items I may have missed and repeating conversations with people I'd already spoken to.

Back at the pawn shop, I found a bowl full of mints – I can take one and either eat it or keep it. I eat one and keep another. Later, I ate another three to see if I'd get thick spit or something, but he seems to have an infinite amount of mints (or possibly 5.)

I ask the shopkeeper about the magic map the ferryman mentioned.


The map seems like it would be very useful - automatically taking me wherever I want to go just by thinking about it, but I'll need to find something equally useful in trade. I notice that occasionally one of Mr. Creepy's eyes glints. I can't seem to do anything with it though, unless I need to be pixel-perfect with my clicking.


I go back to the bookstore and meet some kind of clown.


I offer each person all of my items, but nobody wants anything. I find a cauldron outside the pawn shoppe that will likely later contain something of use.


Looking multiple times at the shelves shows that the merchant sells items that would serve a purpose in previous King's Quest games, including tongue climbing gear, a golden bridle finder, and a bridge repair kit.

I use all the items in my inventory with each other, and individually. I discover that the possibly cursed book is actually just really boring and makes Alexander yawn.


Despite finding out a few more things, I still had no way to proceed. Refusing to end my first post with a request for assistance, I kept exploring. And in doing so, I found exactly what I needed, back in the place where I started the game.


Convinced that this item was not there earlier, or at least the two-pixel wide item was not glinting earlier, I reloaded to my first save and even checked the screenshot from my introduction post. Oh, the ring was there, and it was glinting every few seconds – I just totally missed it.

So tune in next time when I'll show the guard dogs my royal ring, and hopefully enter the castle and see Princess Cassima – though I really get the feeling I won't actually see the Princess 'till I'm much further on in the game.

If you've enjoyed reading this post, we accept payment in the form of something of approximately equal value in return, or something of lesser value with a genie inside. 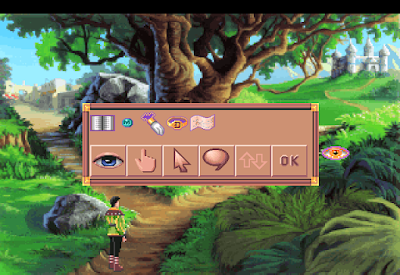 Predictions made:
Posted by TBD at 23:00