Lure of the Temptress: Talking To People: The Game 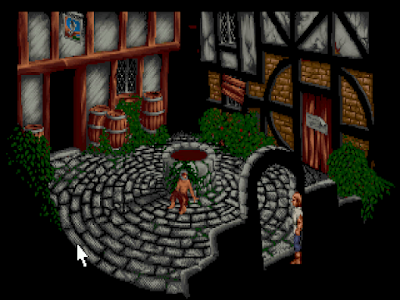 Lure of the Temptress is one of those games, those kind of games that makes mapping fun by using all sorts of tricks to distort the laws of physics and good game design.

See that screenshot up top? In a game like, say Quest for Glory, walking off screen to the right would move the player to another screen, approaching from the left. This would not only make mental navigation easier, but would also help the player make a paper map that makes sense.

Not so in Lure of the Temptress.


You see, leaving that idyllic-looking town square to the right could bring me to a screen that looks like this: 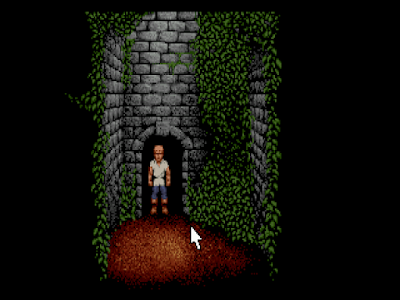 Which in turn could bring me here:

Yeah. Needless to say, my map is a complete mess of boxes and lines flowing hither and yon, resembling nothing so much as a giant jellyfish. Let’s just say that its usefulness is marginal, at best. I suppose I could eliminate the alleys—which sometimes appear two to three screens in a row—but I don’t yet know if I’ll need to do anything there yet.

So this session was spent mostly getting my bearings in the Skorl-occupied town of Turnvale, and picking up a few quests that finally get the main plot started. And I talked to a bunch of people.

First, Turnvale. I like the way that Lure of the Temptress gives the player a rundown of each room when the “Look” command is selected. I’ll go through the points of interest in Turnvale, as well as the people wandering around pursuant to Revolution’s “Virtual Theater”—sorry, “Theatre,” before I begin with the chain of talk and fetch quests that Diermot was thrust into.

For an occupied town, Turnvale doesn’t seem too bad, unless you count the boarded-up buildings, the Skorl wandering about, and the general atmosphere of paranoia and distrust! It’s a regular 1960s Berlin here!

As your tour guide, allow me to share with you the sights, the sounds, and the smells, of scenic Turnvale: 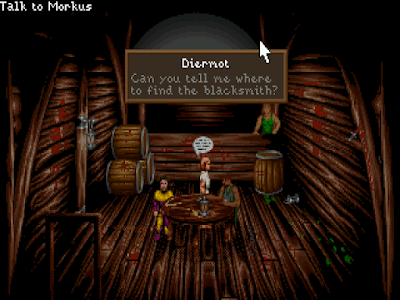 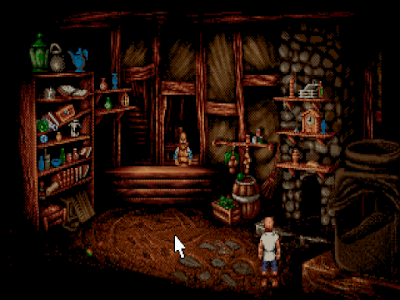 In addition to the people inside Turnvale’s various buildings are some that wander about according to their own schedule based on Revolution’s Virtual Theater. Basically, these folks go to and fro, wandering in and out of shops. Luthern is one, but he at least has a home in his forge. Here are some of the others I’ve encountered walking Turnvale’s streets.


So that’s Turnvale. And now, a little about what I actually did there.

According to Wulf, Diermot’s first task is to find the blacksmith and talk to him about a supposed resistance to Selena. I ask around, and am even told by Ewan that there is no blacksmith after the grand Wizard’s weird law about abusing metals.


In any event, I keep asking around and am told by others to go to the forge. Alrighty, then.

Along the way, Mallin gives me a metal bar to give to Ewan. I do this, and Ewan gives me a chain attached to a blue jewel. The jewel, apparently, is not real. It is made of “paste,” according to the game.

Sigh. It’s going to be one of these games.

But I guess it makes sense, because of the law against mistreating metal. The whole thing is pretty dumb and I sure hope this plot thread pays dividends later on in the game.

Anyway, Ewan also gives me seven groats, which is kind of a gross name for currency, isn’t it? Just what is a “groat,” anyway?

Checking with my friend Mr. Wikipedia, I learn that groats, also called “berries,” are the “hulled kernel of various cereal grains such as oat, wheat, rye, and barley.” Groats are also “whole grains that include the cereal germ and fiber-rich bran portion of the grain, as well as the endosperm (which is the usual product of milling).” 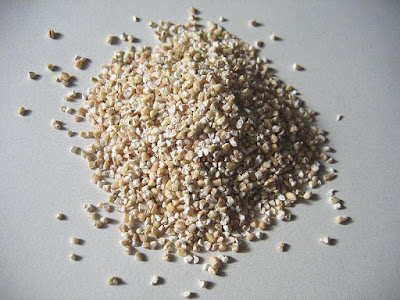 Okay then, everyone is using this stuff as currency. Fine, whatever. I really don’t care as long as I can buy stuff with it.

Remember the sign outside of the Magpie Tavern? That’s right: the bird was painted holding a blue jewel. With nothing else to do, and not having found the forge yet, I head to the Magpie and give the jewel to Nellie. 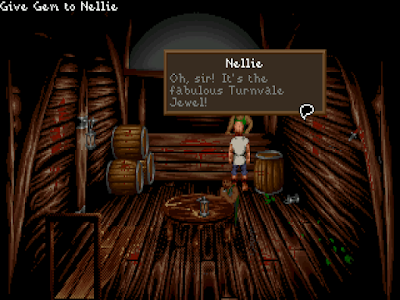 Apparently, it’s the Turnvale Jewel, which had been stolen at some point. Nellie is so happy, she gives me a flask of some potent liquor that makes Diermot start to see things. I have a feeling I can use it to bribe someone or other in this God-forsaken town. But first, I need to find the blacksmith.

I catch Luthern wandering around near the Town Hall, of all places. He tells me to meet him in his forge, which I do . . . and where I grab the tinderbox that appeared only because I restarted the game right after beginning. Gotta love potentially game-breaking bugs . . .

I tell Luthern the message from Wulf: that the girl is in danger. Luthern knows what it means:

Luthern: “He means Goewin, the girl who keeps the herb shop. She has disappeared! If you want to help us, search the town for news. We must find her!

Diermot: Where was Goewin last seen?

Luthern: I met her last night outside the Magpie. I asked her to help me with a little job. I haven’t seen her since, and it’s all my fault!”

Hey, don’t be so hard on yourself, Luthern, even though it kind of was your fault. But at least now I have another mission.

By the way, Ratpouch vanished at some point, and I haven’t seen him since. I sure hope he wasn’t important to keep around . . .

So it’s time, once again, to interrogate the citizens of Turnvale. Some are, shall we say, less than helpful. Ultar claims that he is Goewin. Edwina tells Diermot to butt out, and that Goewin deserves whatever punishment she gets. 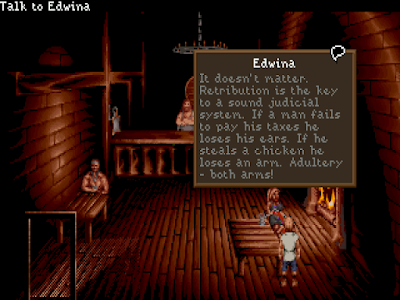 Nellie is at least more helpful. She tells Diermot that a Skorl was in her tavern last night asking for her. The Skorl then spoke to Morkus and left.

Morkus, for his part, is an unhelpful tool, telling me that, since he doesn’t know Diermot, he’s not talking. Which I guess does kind of make sense as Diermot is a stranger and all of this business sounds dangerous. But I still don’t like the guy.

I use the “Bribe” command and fork over a groat. Morkus is less-than appreciative . . . but he does end up talking. 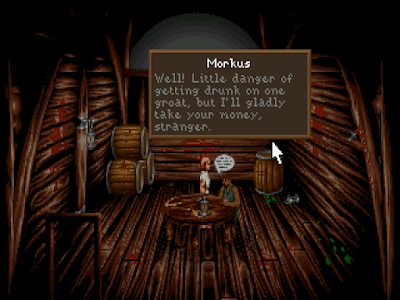 Goewin has been imprisoned in the Town Hall, accused of being a member of the conspiracy!

Thinking the direct approach may be in order, I head to the Town Hall to talk to the Skorl guard. I try to bribe him with the flask, but he just tells me that Selena doesn’t want any of the Skorl consorting with humans. Useless, just like all the other Skorl in this game.


I get ready to go talk to everyone in town again, when who wanders by but good old Luthern!

Let me interrupt here to tell you how Virtual Theatre really works. In theory, it sounds cool. In practice, you can have upwards of four dummies wandering about on the screen, knocking into each other like idiots and spouting random bits of conversation. But in this instance, it was actually convenient. 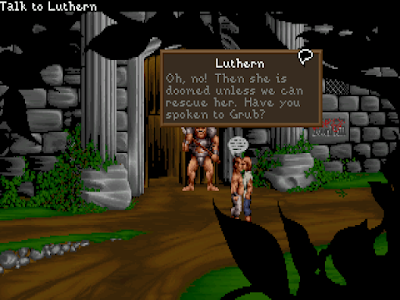 Luthern tells me to talk to someone named Grub, “a resourceful rogue,” and ask him about the Black Goat. That’s some kind of signal to let Grub know Luthern sent me.

You know what this means! More asking around Turnvale!

By happenstance, the first place I end up at is The Severed Arms. Gereint is unhelpful, asking if I came to drink or gossip, but I ignore him and talk to Edwina instead. She . . . is actually helpful, telling Diermot that Grub will “be somewhere around the town, watching the world go by and contemplating the folly of mankind.” When Diermot asks if Grub is a great philosopher (Can you imagine? “Behold, the great philosopher . . . Grub!”), Edwina replies that Grub is actually “a lazy old sod.”

Ah ha! I know one of those!

On the way, I ask Ewan about Grub. He tells me to as Gereint at The Severed Arms, as he and Grub are “great pals.” I supposed if I bought a drink from Gereint, he would have shared some intelligence. Oh well. Edwina was helpful enough as it was. 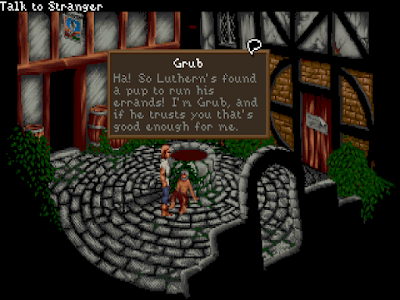 When asked about the Black Goat, the Old Man at Magpie Courtyard reveals himself as Grub. He drops the poetical ramblings and tells me I need to find Taidgh, the magician. He gives Diermot a lockpick and tells Diermot that his house is in the marketplace but is “well guarded by the Skorl.”

Back at the Market Place, I check the lock on the abandoned house and “Use” the lockpick on it. Diermot is unable to do so.

I guess . . . I guess I have to start going around asking everyone if they’ve seen Taidgh.

No one knows, and no one seems to miss him. Taidgh apparently vanished when the Skorl rolled in to town. I try paying Gereint this time, and he just tells Diermot that he’s an “idiot” and that his house in the Market Place is abandoned.

So bereft of ideas, I talk to Edwina who . . . had ransacked Taidgh’s house and stole his diary. Which she forks over to Diermot. 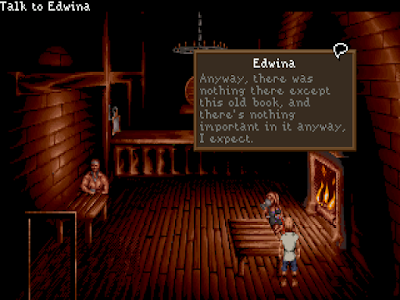 The diary mentions that Taidgh got a recipe from Gwyn, but otherwise chronicles, in bits and pieces, his plan to disguise himself as “their mistress” and make a potion, presumably, to make himself look like Selena.

Gwyn is unhelpful, as is everyone else, even Luthern. With nothing else to do, I end this session to rest up and steel myself for another exciting round of . . . talking to each and every one of Turnvale’s citizens and trying every inventory item on everything and everyone.