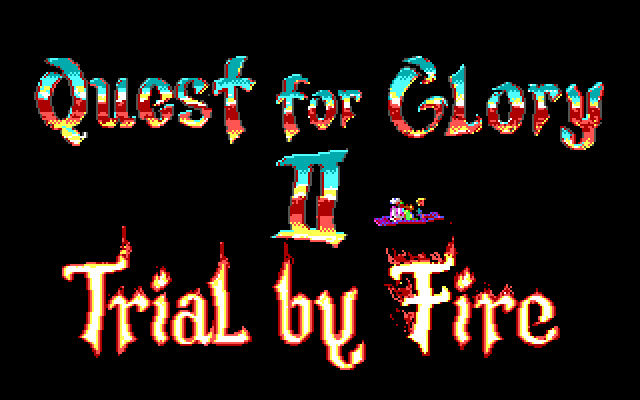 Well won’t this be a breath of fresh air! After the infuriating Altered Destiny, I now have the joy of revisiting my favourite adventure game series. Quest for Glory II: Trial by Fire is the sequel to 1989’s Hero's Quest: So You Want to Be a Hero. The first game currently sits second on the Adventure Gamer Top Rated Games list, only topped by the masterpiece that is The Secret of Monkey Island. As mentioned in my introduction post for Hero’s Quest, Sierra were forced to change the name of the series prior to the sequel due to trademark issues, hence Hero’s Quest turning into Quest for Glory. 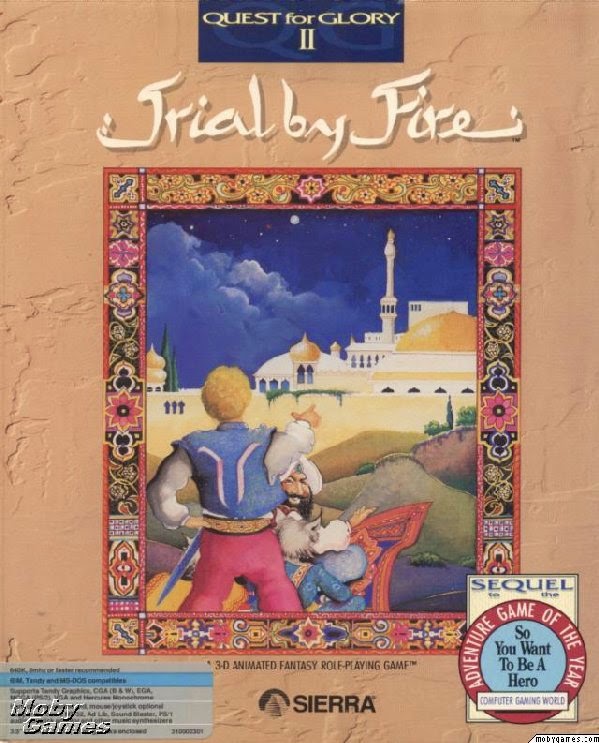 Rarely does a cover nail what a game is all about as well as this one did.

As with the first game, it was designed by Lori Ann Cole, although this time her husband Corey (who we’re extremely fortunate to have contributing to this blog) was her official partner in crime. They had a large group of programmers and graphics designers at their disposal, but it’s interesting to note how few of them were part of the team that produced Hero’s Quest. Corey and Jerry Shaw were still around as programmers, and Kenn Nishiuye and Gerald Moore returned for the task of creating the artwork and graphics, but the majority of the remaining dozen or so people were either first timers or had only recently cut their teeth on the King’s Quest remake. The Creative Director was Bill Davis (what exactly does a Creative Director do Corey?), and Robert Fischback (Police Quest 2) led the programming team. The audio elements were handled by Chris Brayman (who also worked on Police Quest 2) and of course Mark Seibert, who came up with the wonderful original Quest for Glory theme music. 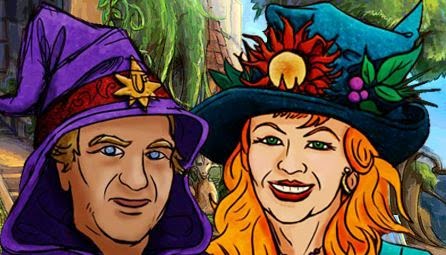 It's amazing how little the Cole's have aged since this photo was taken. I suspect magic!

Quest for Glory II directly follows the events of the first game, with the intro literally kicking off with our hero and his friends Abdulla Doo, Shameen and Shema flying away from the town of Spielburg (where the first game was set) on a flying carpet. They will soon land in Shapeir, its middle-eastern-like culture heavily flavouring the visuals, audio and even plot of the game. It’s worth noting that players have the option of importing their character from Hero’s Quest, but I’ve heard this makes the game very unbalanced, with the hero being way too powerful to begin with. I’ll let you guys discuss whether or not that’s something I should do. I honestly can’t remember whether I did it when I played the game well over a decade ago. There’s also an added class called Paladin, but if my memory serves me correctly it’s only available to players who go through the game choosing the most honourable path. 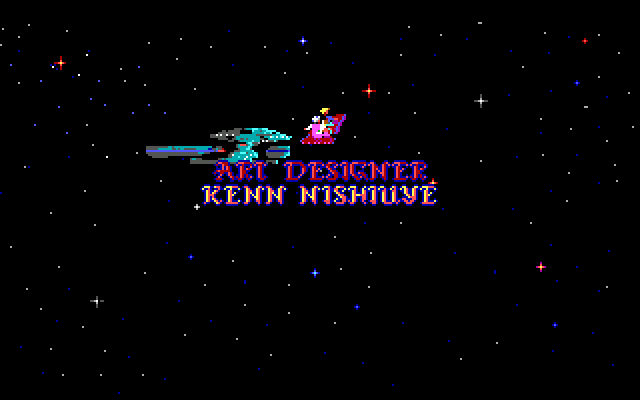 The intro also contains one of the best Star Trek references in an adventure game, and there have been many!

I'll be playing the version that comes with the GOG collection, which is the only version there is. Quest for Glory II is often listed as being the first game to utilise the SCI1 engine, but I recall Corey suggesting the game should really be considered SCI0.5. I'll let him explain what that really means. The manual is much more detailed than the normal fare, including background details, a map, and a stack of information about various locations and creatures that I'll come across in Shapeir. I haven’t read through it all yet, but will do so before I begin. I have however read the “Story Thus Far...” section, and will finish this intro with its closing paragraph. “After a long and harrowing journey, you at last arrive in the magnificent city of Shapeir. Unfortunately, just when you thought you could take a well-earned rest, you discover that Shapeir has problems of its own. A Hero is needed here, too! Now you must become your character, and learn to think as he would, use his unique skills to experience the land of Shapeir, and be a Hero on your Quest for Glory.” Well I’m pumped! This is a call to arms...who’s with me!!!??? 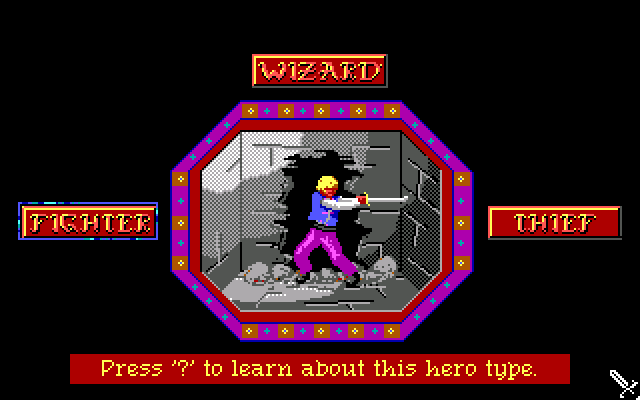 
Note Regarding Spoilers and Companion Assist Points: There's a set of rules regarding spoilers and companion assist points. Please read it here before making any comments that could be considered a spoiler in any way. The short of it is that no CAPs will be given for hints or spoilers given in advance of me requiring one. As this is an introduction post, it's an opportunity for readers to bet 10 CAPs (only if they already have them) that I won't be able to solve a puzzle without putting in an official Request for Assistance (see below for an example bet). If you get it right I will reward you with 50 CAPs in return. It's also your chance to predict what the final rating will be for the game. Voters can predict whatever score they want, regardless of whether someone else has already chosen it. All correct (or nearest) votes will go into a draw.


Extra Note: We're extremely lucky to have a generous sponsor like Lars-Erik. The person who correctly predicts what score I will give the current game (or are closest) will get to choose one of the next five commercially available games on the playlist. Lars-Erik will donate the game once a choice is made. So, if you predict the right score (or are closest), you will get 10 CAPs and a copy of one of the following games:

Email ThisBlogThis!Share to TwitterShare to FacebookShare to Pinterest
Labels: 1990, Introduction, Quest for Glory II: Trial by Fire, The Trickster