Snowball - Eurocracy on a Cruiser

Kim Kimberley reporting 2: “I’ve been awakened from my long slumber, so there must be something wrong with Snowball. It took me a while just to get out of the freezer section of the ship. Now I must find out what exactly is going on here.” 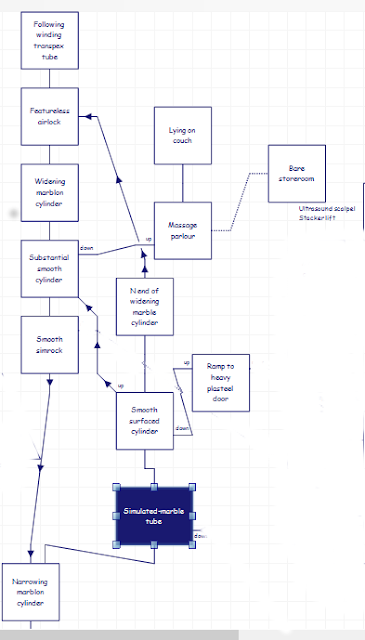 After exiting the airlock leading out from freezer units, I first encountered a long cylindrical tube, with another airlock at the southern end. Continuing north from this second airlock, led me inexplicably to another cylindrical tube, situated under the first tube - I could climb from the lower tube to the upper tuber, but for some reason I couldn’t climb down from upper to the lower tube.

I at first tried to to open southern airlock. I came into a docking bay, and I was promptly told I had no air to breath. I could still move for a while. First, I entered some dark area and then I found myself floating in space, and finally, I died.


A ramp led from the lower cylindrical room to a heavy plasteel door. A robot head appeared to tell me that I wasn’t welcome beyond that door.

Another ramp went down from the upper tube to a massage parlour. Lying down on a couch, I received a massage that invigorated me. In game terms, I guess it meant that my inventory limit had just gone up.

Near the parlour was a storeroom with few items. One of them was a stacker lift, which was meant for lifting the coffins with freezed colonists. I knew that in the original we didn’t need such contraption for picking up a coffin, but I hadn’t checked whether this was true with the graphical version. In fact, I noticed later that in the newer version this gadget was required for picking up the coffins.

The other item was an ultrasound scalpel. I spent some time wondering where to use it, but I only noticed that I could cut with it a hole in the plexiglass tube going through the freezer disks. That wasn’t a particularly wise thing to do.

The upper tube also had a cyladder going down. I have no idea how a cyladder differs from a regular ladder, but apparently it is somehow automated, since it refused to let me in. At one point I managed to witness a scruffy robot going down it - the robot walked around the area doing some cleaning. Trying to take the cyladder just after the robot had used it allowed me to sneak in through the open hole to a new area. 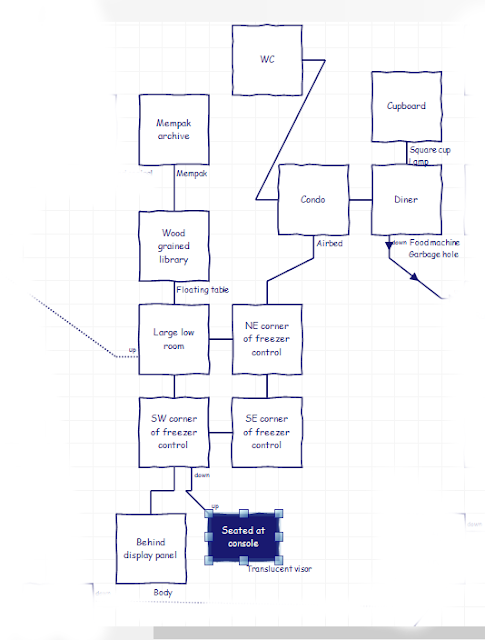 The cyladder took me to what I assumed were the private quarters of the pilot of Snowball. This was truly a realistic take on what living facilities of an astronaut might look like, with an airbed suspended from the ceiling and other facilities a space faring person might need.

The condo, as the game calls it, was a source for new items. Under the bed I found some LEDs, which on further examination were revealed to be diagnostic probes for droids. In a cupboard in the kitchen I found a lamp, which lacked batteries, and a cup, which I could use to obtain some liquid from a food machine.

The pilot’s quarters were connected with the controls of the freezer area. The interface was rather intricate. In fact, it was too intricate for me.

This was the first time I had to take a hint from the official clue sheet, because clearly I should be able to use this contraption. Turns out the solution was to blink after looking at the choice I made. This makes sense in real life - certainly one would automatically blink after a while, thus activating one’s choice. In an adventure game, this was just a really unfair “guess the verb”.

I learned from the VR machine that Snowball was undamaged and all 180 000 colonists were well. The ship had just veered off course and was now heading for the local sun. I also found out some basic information about the ship itself. Snowball consisted of an engine unit, which towed a great hollow ice-asteroid.

Within the asteroid were the freezer disks, protected by the ammonium ice, which was also used as a fuel for the fusion drive. Since this part of the ship was still in the immediate vicinity of the freezer disk, I must have still been inside the asteroid and I should try to find my way to the engine unit.

But most interesting was the diary, in which the writer was afraid of someone called Alpha. Indeed, I could find in the VR machine a note telling me that Alpha was battering the door. It seemed then that something had happened to the pilot. In fact, I found a body behind the display panel of the VR machine.


Near the freezer control room I could find a library. Unlike current libraries, this library had only a floating desk and a video viewer on it. Now, in the pictureless version of the game I could leave the table alone, since it appeared to be good only for carrying items. In the graphical version I eventually had to take the table with me, because for some reason, the inventory limit was more strict. Yes, you can carry around a floating table and put all your stuff on it.

Or at least most of the stuff could be out on the table - the game code doesn’t allow putting containers in or on other containers. What’s even more interesting is that, for example, a lamp is taken as container, because it could contain a battery. Oh yes, I did find a battery (or batpak) for the lamp in the video viewer. It only took a screwdriver to lever the battery out. What was more important was that I could use the video viewer to watch mempaks.

In this enticing selection there was really only one mempak I could interact with. This mempak contained a six-place colour code of my own coffin - and a different code for another crewmember. I knew instantly what to do.

Back to freezer disks

You might remember from the previous post that the freezer disk area was enormous. Luckily, I had now some idea how to navigate in it. The bracelet I had found with the dead body was not just for decoration, but showed a different colour code depending on where I was on Snowball. Specifically, one of the lights on the bracelet showed the colour code of the freezer disk, where I happened to be (there were ten disks in total).

Within the disk, the ten floors all had their own colour code, although only nine of them carried mortuaries. The third colour then showed something like a sector on that floor. Each sector had a blue and a green mortuary, and I knew I was looking for a green mortuary.

At the start of the game, I had thought that this would be the end of it - three colours to identify a pair of coffins, one in green and one in blue mortuary. Actually, each mortuary held a number of coffins, each with its own three-colour code to distinguish it from others in the same mortuary. This three-colour code was the second half of the code I had found in the mempak.

Who was this crewmember? Manual had said that there should have been two persons to deal with any emergences Snowball would fall into, the first one was me, and the other one I was most likely going to meet now. After finding the right coffin, I took it to the nearby revival center.

My fellow agent couldn’t at first say anything, because she was too thirsty. Thankfully, I had this cup of delicious lentil soup to offer her. What I got out from her was another code, this time for a habidome. As I had not yet seen any habidome, this did not help me that much.

Fortunately, after a bit of experimentation I managed to find a new area - in fact, I found the same place twice. Firstly, you might have noticed in the map of the condo one exit I left completely unmentioned. Well, the game has a tendency to outright tell where you can go, which had made me lazy - I hadn’t wondered what I could do with a garbage hole in a kitchen. Yes, I could go down it.

Secondly, I finally managed to get through the plasteel door guarded by a robot head. I just had to wear the clothes of the pilot to be recognised a very important person.


The most notable thing in the droid-handled store service was a welding lance. Unfortunately, I couldn’t just take it, because I had to first give a correct form to a faceless android behind a wide counter. There were forms of all colours around the place, but most of them required giving other forms to other androids. And of course, before I could do anything, I had to find a ticket of right colour for each counter.

This was a pretty simple puzzle, once I just find out the form which I could take without a previous form. It did seem a bit too Douglas Adams in a game that had up to now felt quite serious in its tone.

Near the store service was the garbage tip, where I found a broken janitor droid.

The droid was asking for a spare part. Using my diagnostic probe I was able to determine what part it required. The part I had to find was different in the text-only and graphical versions and might well be different in different playthroughs. Still, it was fairly simple to find the correct part just by exploring the junk around me. As a token of its gratitude, the droid handed me a helmet. Finally, I could do some exploration of the innards of the snowy asteroid, outside the freezer complex!