Quick note from The Trickster: We've reached the second game of 1990 that didn't make the Adventure Gamer playlist, The Oregon Trail. The guest blogger this time is the very knowledgeable Ilmari, and having read his intro and first gameplay post (which I'll post in a few days), I can promise you this is not something you want to miss! Over to Ilmari... 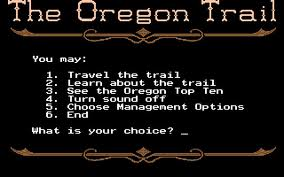 "Heading for the nineties, living in the wild, wild west!"

If someone had come to me two years ago and asked what I know about The Oregon Trail, I would have had to just shrug and admit I had never even heard of the game. I would have been amazed to hear that it is actually one of the most well-known games in the USA and Canada, even outside gaming circles. My ignorance could still be excused, because no-one ever thought about buying it for schools in Finland, and I suspect its fame is largely limited to English-speaking countries. The story behind The Oregon Trail is actually rather interesting. It all began in 1971, when Don Rawitch, a student teacher of history was trying to engage his pupils in the expansion of the USA into the Wild West. One of his ideas, in addition to dressing up as important historical figures, was to create a board game, in which the players assumed the role of frontier settlers, spent their money for various resources, used the dice to determine how fast their wagon moved, and encountered a number of obstacles hindering their progress for a number of turns. 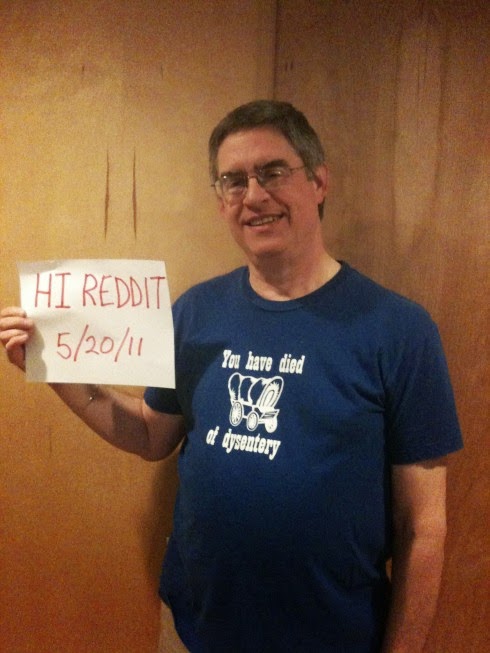 Don Rawitch: Hasn't quite figured out how social media works yet.

Instead of becoming the Reiner Knizia of America, Rawitch abandoned his original idea, when discussing with his flat mates, Bill Heinemann and Paul Dillenberger, two math teachers with some experience in programming. One of the three had the notion that Rawitch's game could be turned into a computer program. In just a couple of days, Heinemann and Dillenberger wrote the first version of Oregon Trail, just in time for Rawitch to present it to his class. Although this was a time of main frame computers, accessed via a phone line and a teletype writer with no graphic abilities, the game was a success. But this was only one semester's work for Rawitch, who as yet had no permanent position, and while his friends quickly found steady positions, Rawitch had the bad luck of being drafted and was facing the possibility of being send to Vietnam. As a committed pacifist, Rawitch applied for alternative service in Minnesota Educational Computing Consortium, which was a state agency, founded for the purpose of helping school children of Minnesota step into the computer time. MECC provided schools with computers and a library of educational programs. Rawitch thought that he might find some use for his old settler program, and in 1974, added it to MECC's library. 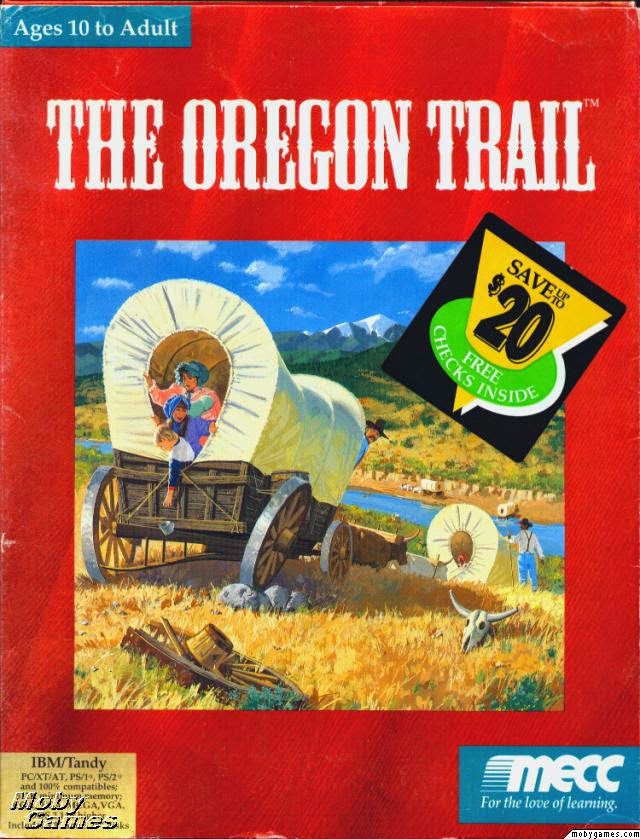 Go West, where the skies are blue

Rawitch's game quickly became the most beloved game of MECC. When MECC began working with personal computers, like Apple II, Oregon Trail also found its way there. Things went not so well with MECC eventually, which at first turned from agency of the state of Minnesota to a private company and was finally purchased by another company working in educational programs. Still, Oregon Trail survived, and even today new versions for different platforms continue to be developed. I will be playing the first DOS conversion of Oregon Trail from 1990. I have already tried the game once, and to tell the truth, I am a little bit perplexed why anyone would call it an adventure game. One could say that as one of the first games to have a real story, Oregon Trail is an ancestor of the modern adventure game. Still, a mere story does not an adventure game make, or else we'll soon see Trickster playing Doom. The game itself isn't that big, so I'll probably just make one gaming post and then the obligatory PISSED-rating. But before ending now, I shall announce a contest. In Oregon Trail, I have to name a crew of five persons, one of whom will be the leader of the party. Members of our adventuring community will probably know very well the members of my team, but can you guess who they are? I will give five CAPs to anyone who first correctly guesses a member of my team. Oh, and ten CAPs extra for the one who will guess who is the leader of the gang. 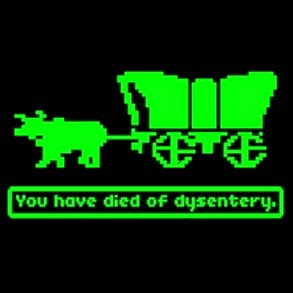 The most famous line of the game. What could make children laugh so much as death by pooping?


Note Regarding Spoilers and Companion Assist Points: Please note that the same rules regarding spoilers and hints that apply to games The Trickster is playing through apply to games guest bloggers are playing through. CAPs will be awarded for required assistance and taken away for any unrequested spoilers not in ROT13. On a final note, last time we had a guest blogger we also had a guest sponsor (TBD). Is anyone willing to donate a game for the closest PISSED rating prediction? You actually get more CAPs for sponsoring than you do for winning!
Posted by The Trickster at 19:29