First and foremost, sorry for the negativity. I did not hate the game so much as dread playing it. A fine distinction I'm not sure I'm describing well in words. It's not bad. I just did not have fun. I'm not sure how clear that is, but I'll try to expound on it through a system developed by Trickster to evaluate graphical adventure games (a genre this dips into ever so slightly). Any parts of the game I don't touch upon were adequate.

Puzzles and Solvability
Puzzles... puzzles... yeah, I guess you could call them that. In reality, most puzzles are presented in such a way that you either have the item or skill necessary in which case the solution will be obvious, or you don't have the item or skill and you'll have to stumble across it without any idea of what you're looking for. Now, there were times that required me to pick up on certain keywords and use them in questioning others. It came down to either a trivially easy solution, up to clever investigative work, to "I hope you bought the necessary item there's no clue about buying." Once I generated enough funds to buy everything up, the game grew on me. It was then that I needed to rely on finding the correct person to ask about a subject, and the game once again became a pain. Searching for the one location to ask a specific keyword with little indication isn't my idea of a good time. Even when I was doing things right it felt like it was wrong, but that's due to the fault of the interface (although partially my own).
Rating: 5 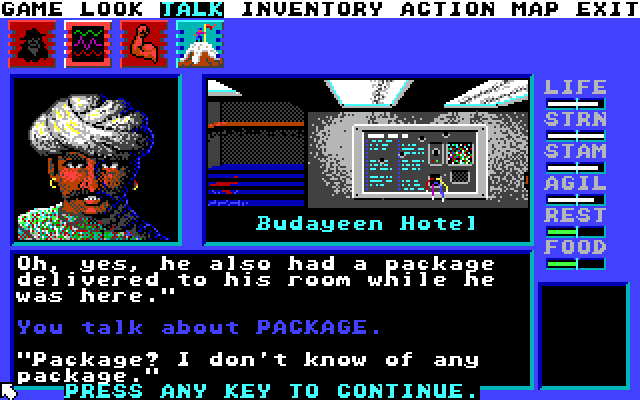 Most of the puzzles are solved through dialogue, which would be fine if the characters could carry a conversation.

Interface and Inventory
The inventory, both items and chip implants, are limited. I understand having a limited inventory, even if I don't like it. However, implementing one forces the player to become creative with their items, like having a pile in their apartment and a separate pile down the alley. Chips aren't such a big deal as you can carry 10 even when only 4 are equippable at any one time. Inventory on the other hand is limited to 11, but that's already taken up by a space for kiam, the chip rack, the belt phone, and a banking disk; none of them felt optional, although I suppose I didn't always need the banking disk. The interface on the other hand left much to be desired. Beyond the fact that I was able to break the game just by using an item in the wrong location, I ran into many issues where I used the wrong keyword yet had no indication what were the alternatives. All but a single keyphrase (odd woman) were single words, words that the parser picked up on very well. In fact, a little too well, as when I asked about "ice pick" characters thought I was asking about a "lock pick." The limited responses to key items in the game (ice pick was the murder weapon in the beginning) didn't allow me the freedom to explore the world, to get lost in it. Instead I was playing the game the way the developers wanted. The game does have mouse support as well as a much more responsive single key menu. It does have it's quirks though, such as trying to pick up item 'E' which is also the key to exit buildings (guess which one the game always assumes you want to use). One of the best features is the ability to recall up to fifty events. These are the exact descriptions for situations of note that have passed. This may be one of the first games with an in-game journal.
Rating: 4 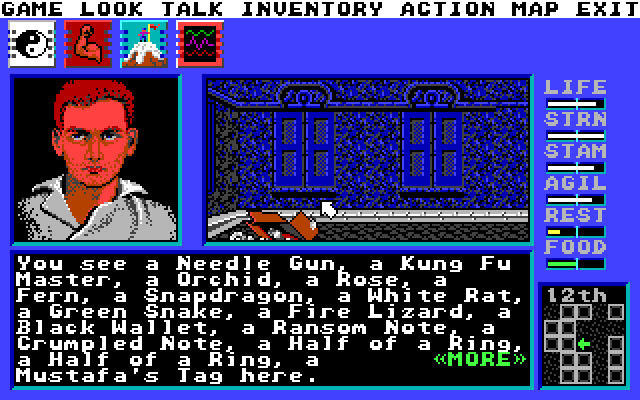 Story and Setting
One of the most unique settings I've seen constructed in a coherent manner, wrapped in a story of taboo and intrigue. The Budayeen is said to offer up any opportunity for debauchery. It's said to be a lot of things that really don't come through in the experience of the game. Even with the in-depth back story, learning about all the characters close to Marid, I found myself lost trying to understand the connection between what I was told and what I needed to find out. I'll cover dialogue below, but I want to touch on how many of the characters are one time use and act as generic NPCs the majority of the time. The story unfolds bit by bit with many false starts (and false false starts). The small bits of information gathered at each location, with each interaction, are just enough to pull more information. The feeling of ignorance didn't lift until the final moments where the story decided to wrap itself up in a long exposition followed by an anti-climactic scene. I appreciate that it's a game that tried something different.
Rating: 5 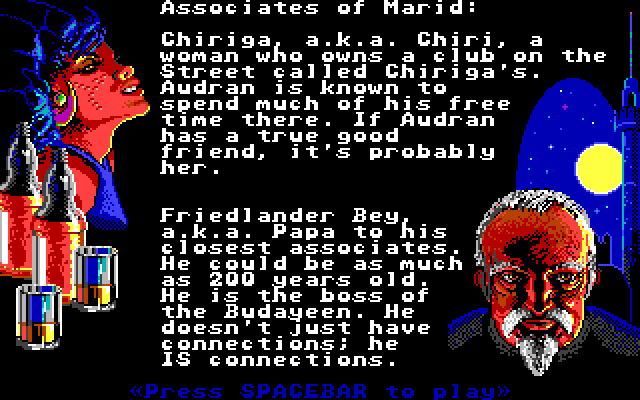 Seems we'll have to wait a couple hundred years to confirm this game's lore.

Sound and Graphics
The music and graphics are well done. I'm easily amused when it comes to both though, so don't take me on my word. Still, I'm fairly sure it looks better than most games released at the same time. It's a bit Spartan with the number of unique locations, but given the size and scope of the Budayeen I won't knock it for reusing its graphics. Sound effects are missing altogether (save some beeps and boops when saving and loading). The main theme was quiet enough to break the silence every once in a while and leave me able to explore without distraction. Fight music was upbeat and intense, even if the fighting was not.
Rating: 6 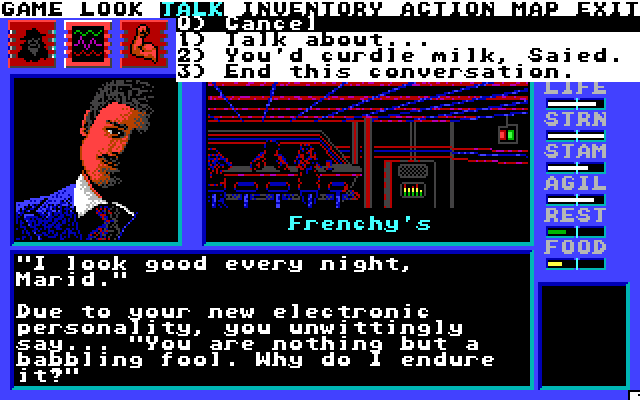 Because I promised Trickster and everyone on this blog that I would.

Environment and Atmosphere
Dark. Violent. Lawless. These all describe the atmosphere of the Budayeen. The main street offers a wide area to explore, map, and discover; however, the rewards for doing so are small. The game is just large enough to get lost looking for a particular person who you may or may not know the identity of. The combat, and generally most of the RPG-elements seem ill-fitting with the framework of the rest of the game. Take the stats, useless outside of combat, and hidden unless a certain chip occupies one of the precious slots. Requiring rest, food, and a careful watch on the passing of time adds a sense of anxiety to leisurely exploration. Sex, drugs, and rock-and-roll are all muted in this game, a game that takes place where anything goes. Talking about sex with anyone but a hooker results in a "not with you buddy." Hookers ask to meet up later, but never tell you where. Taking any drugs results in thugs beating you to near-death. Alcohol only serves to reduce stats. Combat is a serious affair, until you get your first weapon or combat moddie. Also, outside set fights (I count three) I ran into maybe four random encounters. I even tried looking for trouble on occasion to build up some cash, ducking through alleys, and couldn't drum up any action. The option to fight random people is there, but if you attack first a cop will find out and attack you afterwards. Characters aren't even mad after you fight them. I beat down Chiri until she ran away, then called her up to have her say she was at the medical clinic where she happily chatted with me. I'd like some realism in my realistic game. The descriptions and general writing (outside of dialogue, which comes next) is enough to bump this up from the 3 I thought about giving it.
Rating: 4 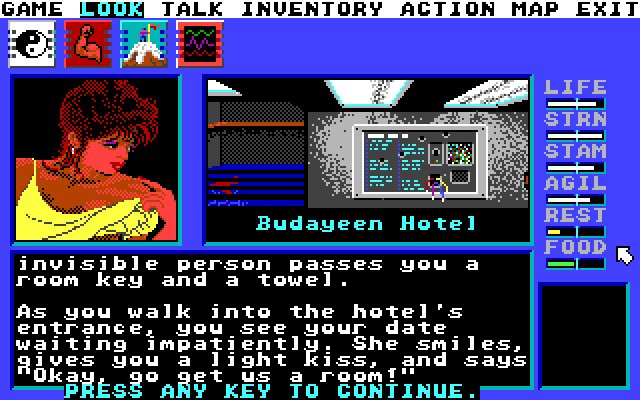 If you didn't want to wait for me, then you should have told me where you were going.

Dialogue and Acting
What I felt most lacking in the game was the ability to interact with the characters in interesting ways. Instead, all characters gave stock answers for certain things, even when plot related events were happening to those characters. Abdul-Hassan was kidnapped, yet asking anyone about him while that was happening just pointed me to Hassan's store. Asking about something unimportant to the plot results in an "I don't know" while something important although unrelated to the character I ask results in "Sounds familiar..." Something that's absolutely unhelpful. Instead of offering hints like, "wasn't so-and-so friends with insert store owner" or "I think I've seen them often around 15th street," I'm left to crisscross the main street searching for the lone character that knows what I'm talking about. The back story did so well at describing these characters. It feels wrong that they've turned into interchangeable set pieces. Ask Chiri about Fuad or Saied, and you get another stock, "everyone knows <INSERT CHARACTER NAME>." Thanks game for drawing me in. Lastly, before I forget again, each moddie imparts skills that belonged to someone. In addition to the skills the personality quirks spill through and at times take over. While walking down the street while Super Spy is jacked in Marid will comment on how he could really use some imported cigarettes (which I can't buy) or how he'd feel better with his Walter PPK (which I can't buy either). In addition to the random innocuous musings (Kung Fu Master say: "Dog with bone in mouth does not bite."), the personality will interrupt a conversation and replace what you wanted to say with a random positive or negative comment related to the personality. (I found Super Spy complimented women more than any other, but that may just have been my experience.) Enough of these negative comments can cause the conversation to end, and did a couple of times, before you can gather all the information you need. It was already aggravating enough trying to guess keywords, but being interrupted mid-sentence doesn't feel... bored now.
Rating: 3 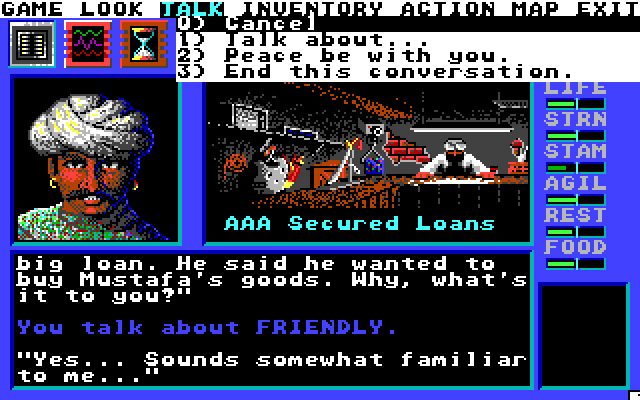 He should, you were just talking about him but forgot to tell me where I could find him. 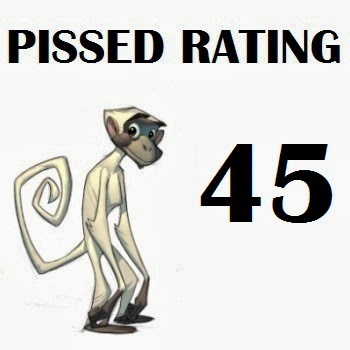 I'm glad I played it here as opposed to on my own, as I don't think I'd have finished it otherwise. I'm looking forward to what Chet thinks of the game when he gets to it some time this gaming year. So, did anyone guess that? Well, look at that. Ilmari guessed 45 on the dot, and with that happenstance I turn the duty of guest blogger over to him.