Night 4: "I found the star sapphire! With it safely back in the jewelers hands, he eagerly parted with his Japanese language chip. I feel like this is my first quest completed. My reward, however, is about as helpful as any other lead I've received: near zero at current. My immediate leads are a bullet, a ransom note, and a black key. I learned Tamara is Kenji's daughter, and suspect she's behind the killings. Based on the holodisk I believe she is a he now, and exacting some kind of revenge or covering her trail. I'm not sure how I'll track her/him down." 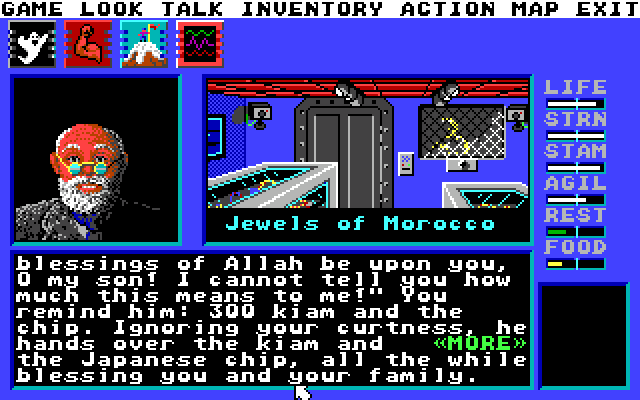 Apparently it means 300 kiam and a Japanese chip to you.

Here we are once again, following another night of clues in the hope it leads somewhere. I chose the most obvious to follow, and headed for the Shimaal Mosque. I was fortunate to arrive at 12:30 am, and only had to wait another 30 minutes. Waiting in deadly silence at a Mosque in the middle of the night somehow unsettles Marid. To kill some time I asked Bill about some random things in my notes. "Tamara" generated something interesting. "Tamara Carter?" he said, "Never met her." Well, that was a bit of a surprise. The same Tamara that was involved with Manny is the daughter of Kenji. Well, it's almost 1 am; I suppose I should wait inside. 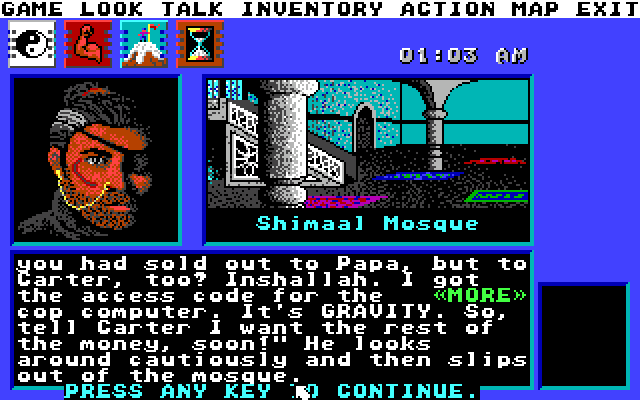 Which Carter are we talking about now?

Back in the Budayeen no one seems to know who Marco is, and no one has ever met Tamara. I started asking around about the cop computer since I have a password. Chiri suggested I might find Marco in that computer if I could learn his last name. Hmmm, where could I find a police computer? The police station possibly? At the very least I could ask Hajjar, although I was certain he would just brush me. I was right, Hajjar was no help, but in the corner was a computer, accessible through the action menu. Good job interface. 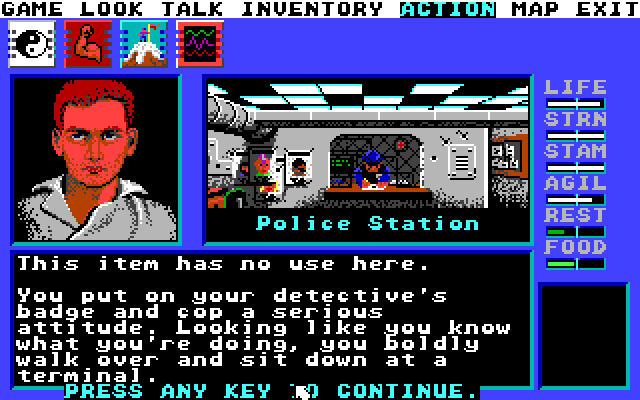 Officers only... good thing I picked up this badge.

From the computer I learned that Tamara was last known to stay at The Red Dunes Apartments, and confirmed Kenji Carter was her father. I asked around about Red Dunes, but no one knew where it was. My map revealed no current business by that name; however, a place called The Sahara seemed close. My hunch was correct. Just my luck though as she no longer lived there, and left no forwarding address. Cycling through my notes I realized I never paid Guido a visit. He might be interested to learn his hired hand had been severed. 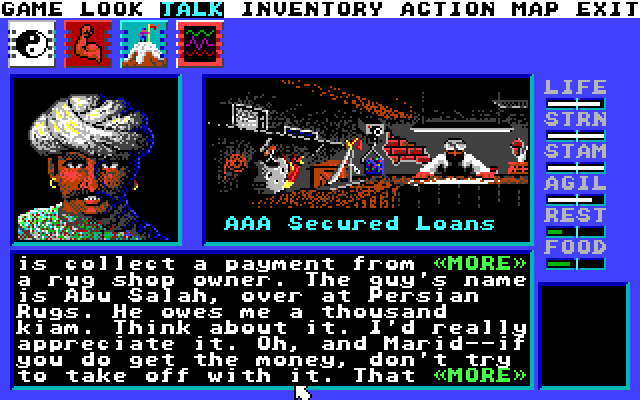 Manny's dead? Marid, do you want a job?

Apparently Guido isn't too broken up about Manny's demise. Asking about Marco and Tamara met with the same lack of information. Instead I got a job to visit Persian Rugs to collect some money, a job Manny was in the middle of before he died. Sounds safe, let's do it. Persian Rugs was closed at the time, so I took a nap. I awoke with a start as my phone went off. Mahmoud, the owner of Hassan's (a shady operation dealing in import/export of any item desired), asked me to come over immediately. When I arrived he said everything was fine; however, the young boy that normally tends his store was strangely absent. 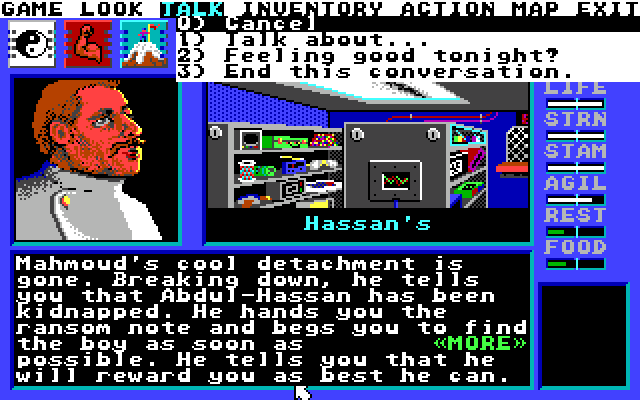 What more can you tell me about Abdul's disappearance? 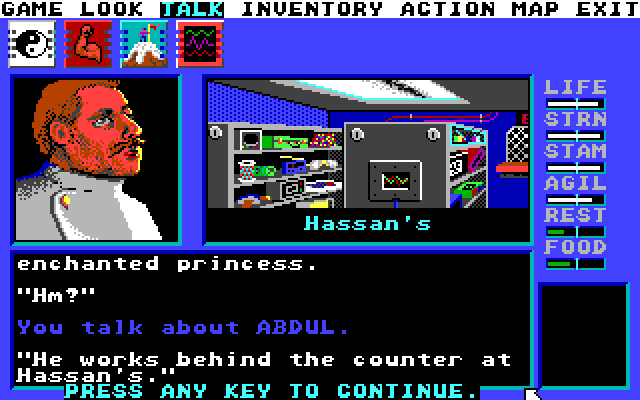 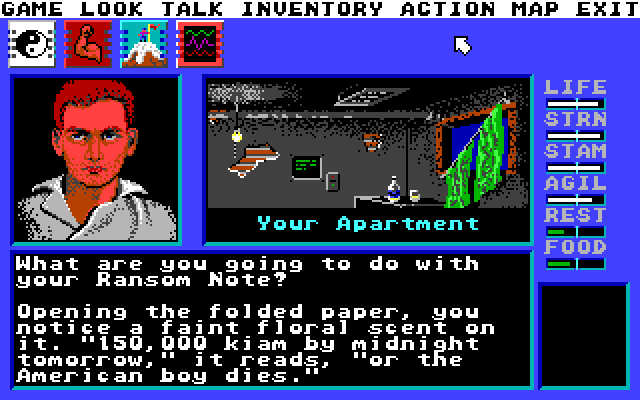 Would it kill anyone to date their time sensitive messages?

Persian Rugs was still closed, so I rested until it opened. Abu Salah was quite amiable about the situation and happily retrieved the 1,000 kiam he owed Guido. On my way out I ran into a man that looked familiar somehow. Like I'd seen him before, briefly. Almost like I could make the connection, but Marid could not. 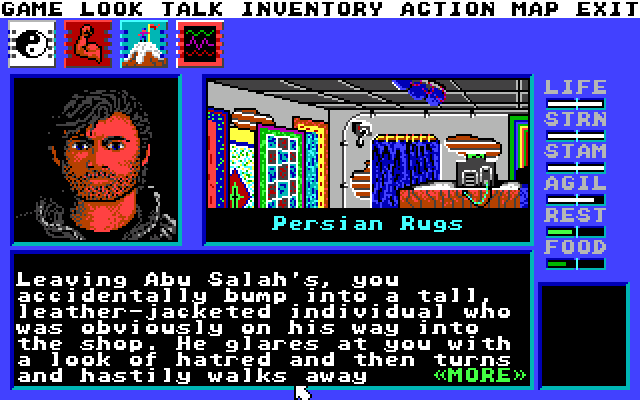 You look familiar. Have you ever killed Kenji Carter before, or hit me over the head in his apartment? 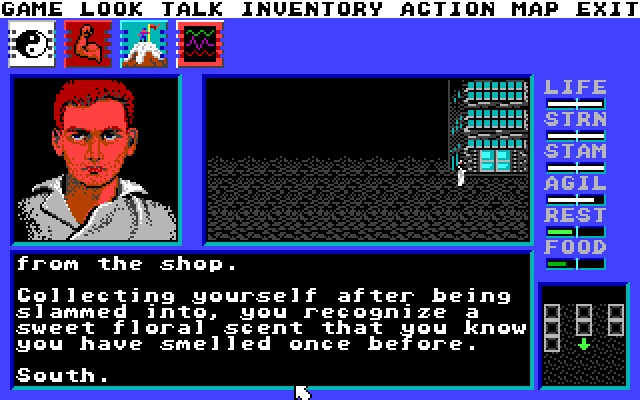 Do I need to whip out the ransom letter and smell it again?

I returned to Guido, and found him in a good mood. Seems getting his money will do that for him. He let drop that Abu isn't on the up and up (but who is in the Budayeen). He went on to say Abu recently hired two heavies, brothers, Marco and Alejandro Herrera. He suggested I should break into his shop and check it out. Guido gave me my 10% cut for delivery of the cash, and bid me well. Back at Persian Rugs I found the lock easily broken with an electronic lock breaker I bought during one of my spending sprees. In the back of the shop were notes about various people in the Budayeen. Among them the name McDix was crossed out, and the numbers 1409 written above. Next to that were scenes of medieval torture, and a black key. I noted the connection to the plot, and stored the key safely on my person. 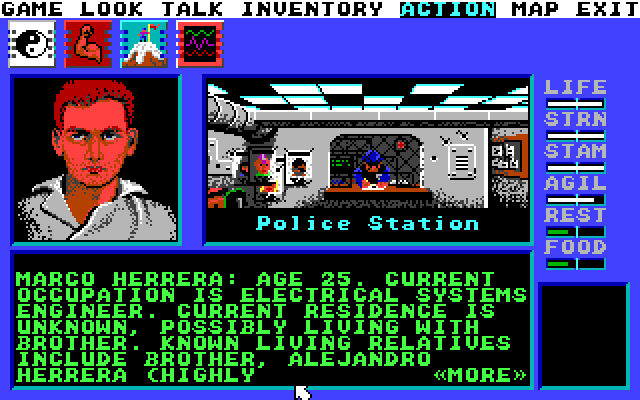 This database sucks. Why isn't the information just cross-referenced?

With a new mysterious key, and the number 1409 appearing once again in connection with McDix, I've reached a new level of lost. I figured I could look up Marco at the police station now. The information they had was about as close to useless as I expected. Next, I tried to look up Alejandro Herrera; however, before the readout came up, a scripted event occurred. An officer who knew me kicked me off the computer and took my badge. I guess I can't get back on that computer now. 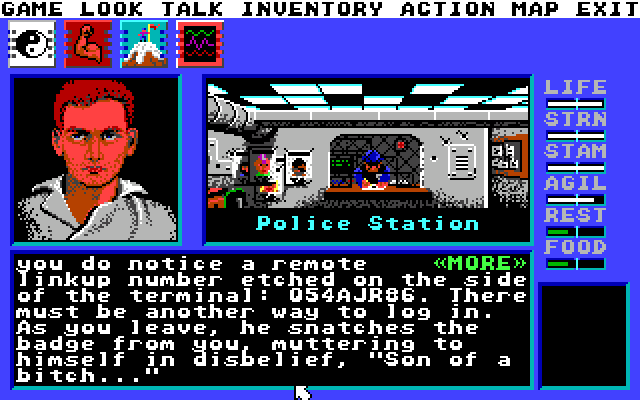 Another way you say?

Back at my apartment I sorted through all the junk on the floor. I grabbed my Data Terminal and Uplink Cables, jack in my Rad Hacker moddie, and dial up the cop computer. It asks for my remote login code: Gravity. With that out of the way, I now had unlimited access. Alejandro Herrera was living at the Medinah, and that's where I'll find Marco as well. When I arrived I found the door locked, and the landlord happily took my 100 kiam "bribe" without offering to open up the door. I picked up The Phantom moddie back at my place, swapped it for the Hacker I had left in, and deftly picked the lock back at Marco's place. 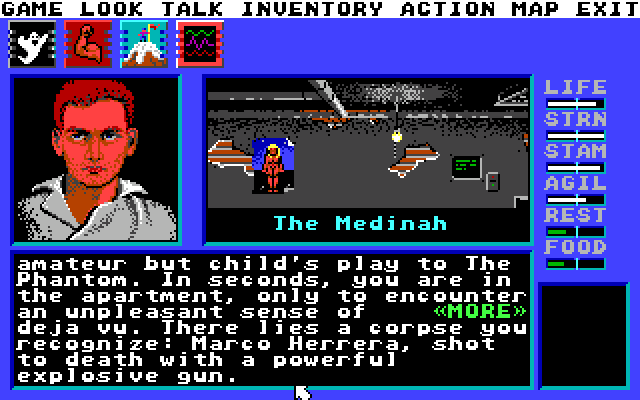 Are the bodies wearing name tags?

Well, there goes Marco. I carefully looked around the apartment. Clenched in the corpse's fist I caught a glint of light. The star sapphire! I pocketed it quickly. Before heading out I fished out a bullet slug from the wall. I quickly took the gem to the jeweler, and collected my reward. The 300 kiam is nice, but the Japanese daddie goes right in once I returned to my apartment. Now for my prize... 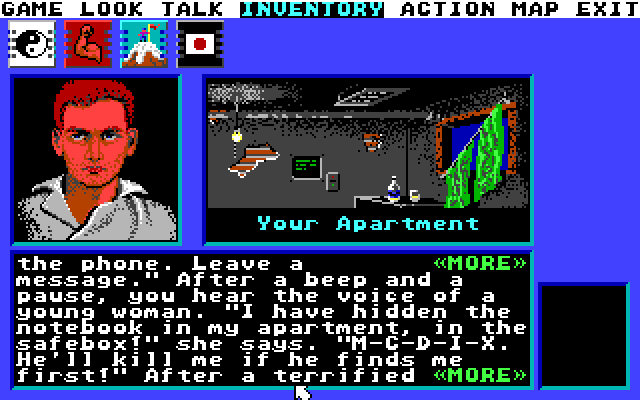 Sorry, I didn't catch your name... first and last please.

If I'm to believe Tamara has had a sex change, then this is probably not her, although I might be mistaken by the clues. The holodisk has her saying, "one last look before the new me." Her landlord mentioned her saying there were big changes in her life before she moved out. However, I can't think of any other female voice that would be speaking Japanese on Kenji's machine. Maybe her voice hasn't changed yet. In any case, I tried the apartments I've visited, and I can't enter any of them anymore. Seems I'll have to set this line aside once again. Abdul-Hassan is still missing with no leads as well. My one follow up is this bullet slug I retrieved from the Herrera's wall. Maybe Crazy Abdul can identify the gun this exact bullet went to, and suggest who owns it. Nah, that's probably too crazy for this game, but it's what I'll try next time I start out.

Note Regarding Spoilers and Companion Assist Points: I've written a set of rules regarding spoilers and companion assist points. Please read it here before making any comments that could be considered a spoiler in any way. The short of it is that no points will be given for hints or spoilers given in advance of Zenic requiring one. Please...try not to spoil any part of the game for him...unless he really obviously needs the help...or he specifically requests assistance. In this instance, he's not made any requests for assistance. Thanks!
Posted by The Trickster at 15:17