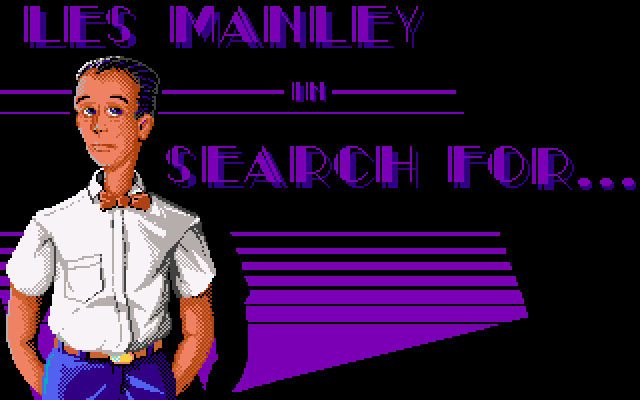 Well at least Les isn't overweight and balding. That should help on the chick front! 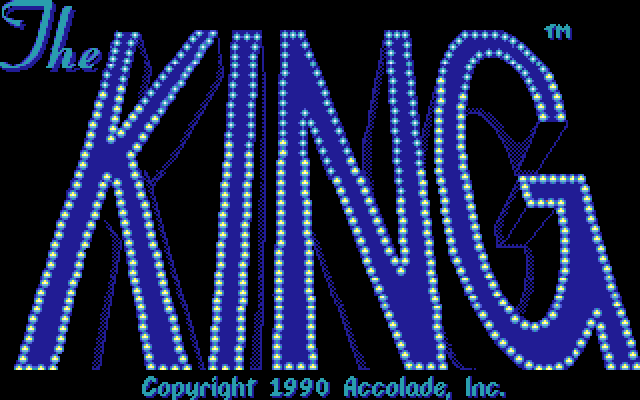 The manual and game intro make no mention of Elvis Presley, so I can only assume it's that "King" they're talking about.

When I set out on this adventure gaming journey, there were a few games that stood out as ones I was really looking forward to playing for the first time. Loom was one of them. The Dig another! In fact, there were classic series that I'd not experienced a single moment of, including Tex Murphy, Gabriel Knight and even Myst! One game that definitely wasn’t on the wish list was Les Manley: Search for the King. I’d never heard of it, and I doubt I would have been chomping at the bit even if I had. When I put my play list together for the blog, Les Manley didn’t even make the cut. It was added later because I realised the sequel was on there, and even then it was given a Disregarded status due to not being on the Wikipedia Notable List and having only 8 ratings on Moby Games. However…in true Larry Laffer underdog style, The Adventure Gamer community banded together and forced Les onto the play list. Aperama (70 CAPs), Ilmari (50 CAPs), Jarikith (49 CAPs), Laukku (30 CAPs) and Canageek (1 CAP) pooled their well-earned resources together and traded in the 200 CAPs that were required for the trade to take place. While I never had any ambitions to play Les Manley: The Search for the King, you guys sure wanted me too! Let’s find out why…

Just in case anyone wants to know who's really responsible

Les Manley was designed predominately by Steve Cartwright. It was his first attempt at making a classic adventure game, but he’d had quite a lot of experience designing and programming Atari efforts such as Seaquest and Frostbite. The closest he’d been to an adventure game was Hacker, an adventure / strategy hybrid in which the player hacks into a secret lab and discovers a company’s plot for world domination. Nothing in these mid-eighties games suggested that Cartwright might have a Leisure Suit Larry clone running around in his head, so it’s perhaps the design work he did for Bar Games in 1989 that planted the seed. Cartwright designed the “Pick Up Artists” event, one of five bar simulation events that made up the game. The Pick Up event had the player try to figure out which girl in a bar left a note for them, and then attempt to score with them. Anyway, Cartwright didn’t make the game by himself, so let’s see if anyone else of note was on the team. The dialogue appears to have been written by Justin Chin (who was heavily involved in the making of Star Wars: Dark Forces a few years later), and he also played a role in the creation of the background art. Speaking of art, there were a total of eight people involved in creating the visuals for the game, with the only two of note being Bonnie Borucki (animation and background art for Leisure Suit Larry 2) and Carolly Hauksdottir (animation for King’s Quest IV). 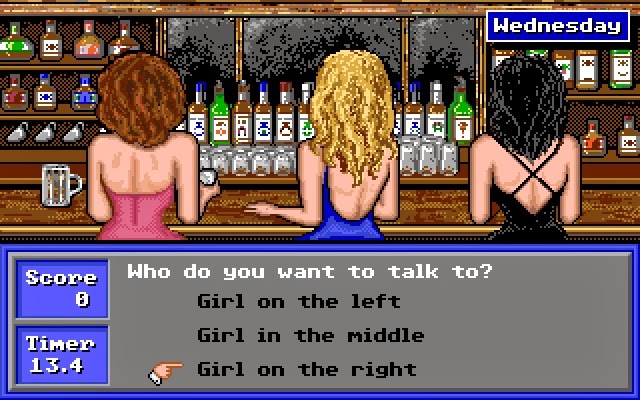 Bar Games Pick Up Artists: It seems to me that Cartwright figured out who the real audience was with this "event".

The Adventure Programming Engine, which seems to be a rip-off of Sierra’s SCI0 engine, was built by Michael Berlyn (who designed Infocom’s Suspended, Infidel and Cutthroats along with Tass Times in Tonetown), Bob Smith, Mark Voorsanger and Steve Cartwright himself. Add Russell Shiffer as the score composer (Test Drive II & III) and you’ve got a very large and experienced team! All this suggests that Les Manley: The Search for the King wasn’t some sort of bedroom-made hobby like Hugo’s House of Horrors, and was instead a serious attempt at making a successful game by a professional team. It’s also interesting to note that no less than six women were involved in its creation, which is unexpected for any game resembling Leisure Suit Larry. It will be interesting to see how females are represented. Considering all of the above, surely the game can’t be that bad can it? Well, reader comments haven’t given me high hopes, and the ratings that critics have given the game over time add to my apprehension. Nonetheless, I have a job to do, and have downloaded a copy which I’ll be playing in DOSBox. I’ve also found the original manual along with a newspaper, a parts catalog and an image of some sunglasses, all of which would have come in the box back in 1990. I’ve spent quite a bit of time reading through these documents this afternoon... The Version 1.1 sticker on the front of the box is interesting. I can't see any evidence as to which version I'll be playing.

Apart from a brief description of Les’ basic attributes, including his age (27), occupation (video technician), favourite movie (The Little Mermaid) etc., the manual didn’t give much away. It did read very similarly to a Sierra manual though, covering off the same topics in the same order (including a closing walkthrough for the first section of the game). The newspaper, called the National Inquirer, was more revealing. The main article suggested that The King (aka Elvis Presley) may still be alive, with a TV station offering a million dollars to anyone that can find him. Also included was an interview with Les Manley, an obvious loser that has devoted himself to getting his hands on the cool million. The only other article worth mentioning was one titled “Extraterrestrials Suck Lard From 300-Pound Woman, Transmit Secrets of Ancient Civilization”, which turned out to be an advertisement for another Accolade adventure game (Altered Destiny, which I’ll be playing soon enough). I was unsure as to why the picture of the sunglasses might have been included in the package, but soon realised these had been a real pair back in the day. They were included as a piracy avoidance attempt, since the Parts Catalog could only be read with them on. Thankfully the document I’ve downloaded shows the parts, along with the prices I will be required to enter, the way they would have appeared if viewed through the sunglasses. Right, enough chat, who’s searching for the King with me?! 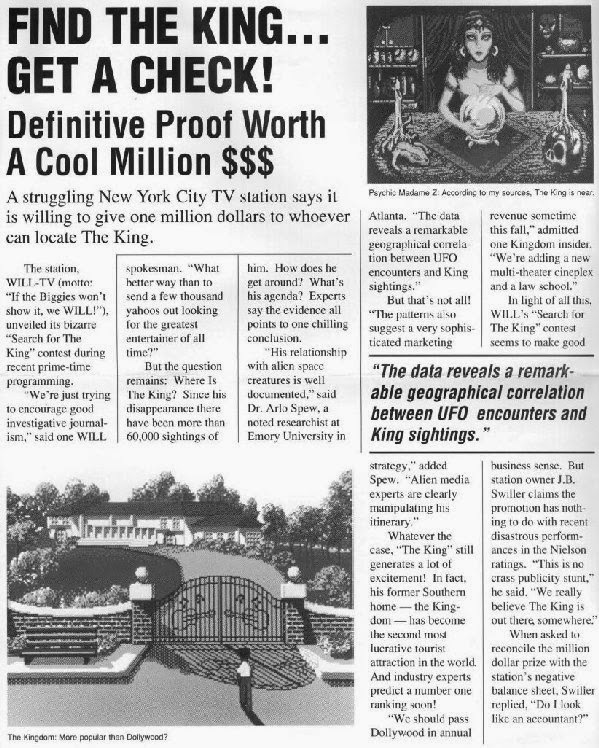 I have no reason not to believe the word of Psychic Madame Z!

Note Regarding Spoilers and Companion Assist Points: There's a set of rules regarding spoilers and companion assist points. Please read it here before making any comments that could be considered a spoiler in any way. The short of it is that no CAPs will be given for hints or spoilers given in advance of me requiring one. As this is an introduction post, it's an opportunity for readers to bet 10 CAPs (only if they already have them) that I won't be able to solve a puzzle without putting in an official Request for Assistance (see below for an example bet). If you get it right I will reward you with 60 CAPs in return. It's also your chance to predict what the final rating will be for the game. Voters can predict whatever score they want, regardless of whether someone else has already chosen it. All correct (or nearest) votes will go into a draw.

Extra Note: Once again, Lars-Erik will gift the next readily available game on the list to the reader that correctly predicts what score I will give this game. So, if you predict the right score (or are closest), you will get 10 CAPs and a copy of the King's Quest Collection from Steam (which includes Roberta Williams' King's Quest I: Quest for the Crown). How good is that!? Good luck!
Posted by The Trickster at 16:08

Email ThisBlogThis!Share to TwitterShare to FacebookShare to Pinterest
Labels: 1990, Introduction, Les Manley: Search for the King, The Trickster