As much as I’ve really enjoyed my time with Manhunter: San Francisco, I have little doubt that the PISSED rating system is not going to be all that kind to it. In fact, I imagine the result will be quite similar to that of Manhunter: New York, since the majority of pros and cons of the first game returned for the second. Let’s see if the improved story and more logical puzzle solutions can push it up past 50!

Puzzles and Solvability
I gave Manhunter: New York a 6 for this category. The sequel uses the exact same puzzle formula as the first one, so it’s tempting to give it the same. However, I just feel that they worked a lot better this time around! I can’t be certain whether it has more to do with me knowing what to look for after my previous experience, but I found the puzzle solutions to be much more logical this time. The ambiguity of the plot meant that I really had to use my brain, and sometimes puzzles took days to solve, but in the end it was logical deduction that got me there. I felt a huge sense of achievement with these successes, much greater than I've had when solving standard inventory or branching dialogue based puzzles. My biggest complaint for New York was how difficult it was to figure out the suspect’s names, but they were less obtuse in San Francisco. I’m therefore upping the rating to a 7
Rating: 7 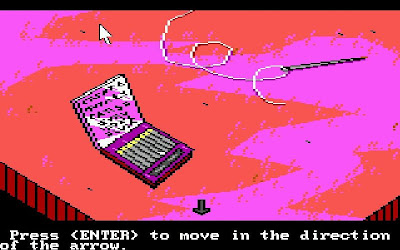 Nothing should be ignored in this game, as it might very well be important much later on.

Interface and Inventory
Well, nothing has changed between the two Manhunter games. There is still no real mouse support, and moving the cursor around with the keys is slow and frustrating, particularly given how much pixel hunting is required. I still feel exactly the same about the MAD interface too. I really love the concept and thoroughly enjoyed watching the tracker recordings and then visiting the locations in person, but having to watch the full recording to its completion before being able to restart, and having no way to jump to a certain part of it, is irritating. It was even worse in the sequel because each recording was much more complicated and longer. The arcade game sections are hardly worth mentioning as the controls are so simplistic (the drilling vehicle one was infuriating though), and the inventory is pretty stock standard too. I only came across one bug, which occurred during the lava flow map section towards the end (one of the slaves and one of the robots kept appearing off the map, yet I could still move them). I’m sticking with the same 3 I gave the first game.
Rating: 3 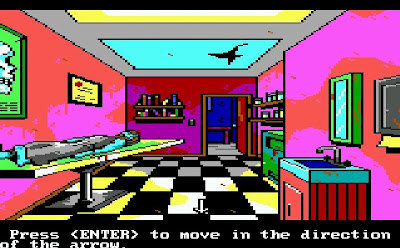 Pixel hunting a room like this one took over a minute, as I slowly moved my cursor up and down the screen with the arrow keys.

Story and Setting
I’m really torn on this one. On the one hand, I was totally captivated by the story in Manhunter: San Francisco. I really liked how it drip fed me information, with new revelations were consistently thrown into the mix. Answers to long held questions were revealed at regular intervals, pushing things along while making the player work for it. However, when I step away and have an actual look at it, I realise that the above feelings have a lot more to do with the game design than the story itself. The fact is I can’t really confidently piece together what even occurred throughout the game, and the majority of the character’s motivations are very unclear. I have so many important questions that remain unanswered, and the failure of the Murry’s to wrap up the story in a third game means I’ll never know the answers. Still, I have to give points somewhere for the amount of enjoyment I got from this game, so I’m going to give it a generous 6.
Rating: 6 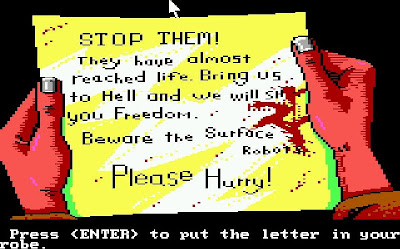 I still don't know what "life" the Orbs were after. What was their actual goal?

Sound and Graphics
Once again, there is very little change between the two Manhunters for this category. There is still an impressive amount of effort and detail put into the game’s visual design, but its effect is dramatically decreased by the very average implementation. The bright colours clash with the game’s overall tone and the animated sequences are fairly laughable. The sound is even worse, and I got to a point where I simply couldn’t listen to the PC speaker quality sound effects and music. I gave the first game a generous 4, but given that much of the sequel’s graphics and sound were lifted from the first one, and the extra year that has passed between them makes it more noticeably horrible than before, I have to punish Manhunter: San Francisco further by giving it a 3.
Rating: 3 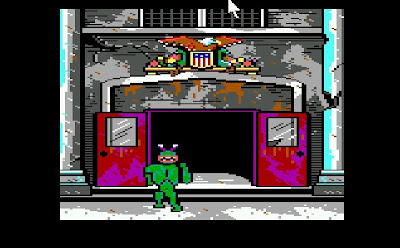 There was lots of little details in every screen, but boy is it ugly!

Environment and Atmosphere
The Murry’s trips to the actual San Francisco landmarks paid off, and I actually looked up the real locations on Wikipedia a few times while playing, just to see how well they virtually imitated them. Moving from location to location on the overhead map also really helped to make me feel like I was exploring a large area, filled with hidden horrors and dark secrets. The city has the same suppressed yet rebellious feel to it that pervaded New York, and there was a surprising amount of gore in the game that added to the atmosphere. As mentioned before though, the low quality and overly bright graphics don’t help on this front, nor does the silly nature of some of the occurrences and messages. Overall, I think it was the puzzles, the story, and the atmosphere that kept me coming back to Manhunter 2, so I have no issue with using fairly high numbers for those categories.
Rating: 6 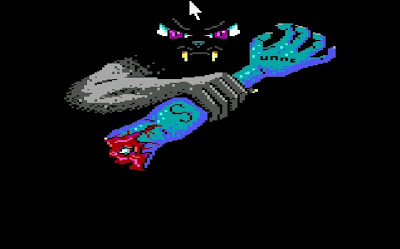 The game pulls no punches...well...that is unless it pulls them off completely!

Dialogue and Acting
No-one speaks in the Manhunter series. I’m not even sure whether there was any explanation for that during the first game, but I guess it’s all part of the repressed society scenario. It does make this category challenging to rate, and the only aspects I can consider are the various letters and documents I collected and the Murry’s messages that popped up from time to time (mostly when I died). These were mostly of the cryptic variety and in that way I guess they were quite clever, but they were also conveyed in the same toddler poetry style, with an attempted humour that was only half successful. It was 4 before, so it’s 4 again!
Rating: 4 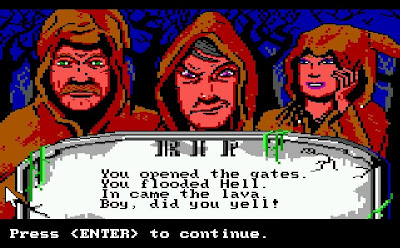 Every time my character died, a little part of my brain died with him! 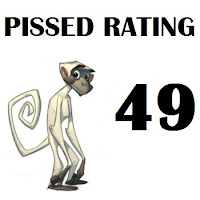 So did anyone predict 49? Time to go take a look. Yes, Fenrus got it bang on the money! Congratulations Fenrus, you win a copy of Tex Murphy 1 & 2. Send me an email to theadventuregamer@gmail.com and I'll reply with the GOG codes. I hope you'll join me for the fun. Once again I'd like to thank Lars-Erik for his generous contribution to the blog.

10 CAPs for Ilmari
• Knowledge Award – 10 CAPs – Because he knows that I don’t know, but I really wanted to know what he knows

10 CAPs for Laukku
• Screenshot Assistance Award – 10 CAPs – For letting me know about the “handy” bug in DOSBox 0.74

5 CAPs for Cush1978
• Minor Assistance Award – 5 CAPs – For “reminding” me that I could target other suspects, but I figured it out myself eventually

0 CAPs for TBD
Failed Bet Award - -10 CAPs – For betting I wouldn’t be able to figure out Tad Timov’s name, but I did
Companion Award – 10 CAPs – For playing along with me

0 CAPs for Fenrus
• Failed Bet Award - -10 CAPs – For betting I’d need assistance with the pipe puzzle (which I nearly did)
• Clairvoyant Award - 10 CAPs - For predicting the score I would give the game
Posted by The Trickster at 21:27