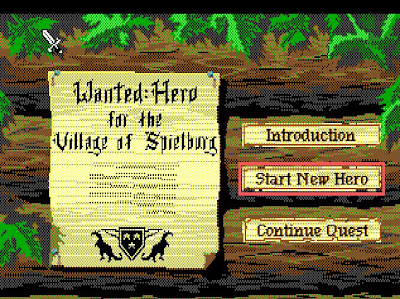 Where's the button for "Become a Hero All Over Again"?

Well here we are! When I started this blog, I was already looking forward to replaying the Quest for Glory series. In fact, that was one of the reasons I placed criteria on what games can or can’t be added to the playlist. The last thing I wanted to do was create a scenario where I’d never get to the likes of the Quest for Glory and Monkey Island games, both of which gave me many happy memories. I specifically remember playing the first Quest for Glory (called Hero’s Quest at the time). I don’t know if others out there experience something similar (I assume they do), but I can also very easily recall a lot of other aspects of my life that occurred around the time I was playing the game. I know what music I was obsessed with and I remember which friends I was spending a lot of time with. In fact, one of those friends and I would play through adventure games at the same time (similar to the way Chet and I are about to do), calling each other up if we got really stuck. I believe Hero’s Quest was the first game we did that with, and I’ve listed it in my top five games ever since. 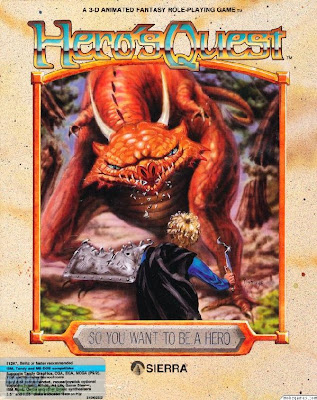 Well now that you mention it...yes, I think I do!

Many of the scenes are permanently implanted in my memory, as is the music, which I can bring to mind at any moment of any day. There are not many pieces of music in the games I’ve played so far where I could say the same thing, although the Leisure Suit Larry and Space Quest themes were also very memorable. The big question is whether or not Hero’s Quest can possibly come close to the lofty position it holds in my memory. As excited as I am to play it, I fear I may tarnish the nostalgia, the way I did that time where I watched Labyrinth and The Dark Crystal back to back (neither have aged well, let me tell you!). I’m also a little daunted at the prospect of playing and blogging about Hero’s Quest at the same time as Chet, who is by the far the better writer, not to mention doing so under the no doubt intrigued eyes of Corey Cole himself. Speaking of Corey, it looks as though the Cole’s next game, Hero-U, will get the funds it needs on Kickstarter. Exciting times! 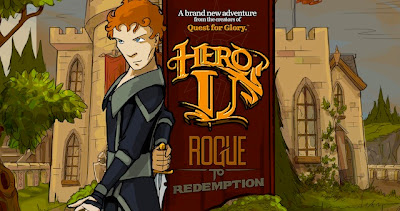 Hero-U: Soon to be Hero-Me?

Enough chit chat, what’s Hero’s Quest all about? Well the first thing I should cover off is the name. Why was the game called “Hero’s Quest: So You Want to Be a Hero?” and then later changed to “Quest for Glory: So You Want to Be a Hero?”? The answer is that the Milton Bradley Company had already trademarked the name HeroQuest (for their board game that I also played as a teenager), so it was changed to Quest for Glory to avoid confusion. Hero’s Quest was designed and written by Lori Ann Cole (wife of our good friend Corey). It was programmed by Corey, as well as Larry B. Scott, Robert Fischbach and Jerry Shaw (the latter two having already worked on Police Quest 2). Interestingly the graphics appear to have been handled by four Sierra employees that would all go on to work on Codename: ICEMAN (Jeff Crowe, Gerald Moore, Kenn Nishiuye and Cindy Walker). Finally, that highly memorable music that I talked about earlier was produced by Mark Seibert, whose list of games during this era is almost as long as my playlist. 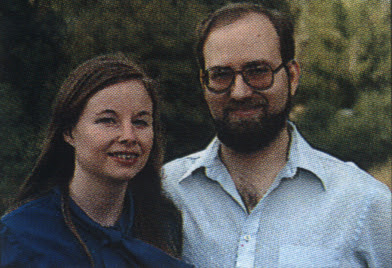 Lori and Corey in 1991: Don't you love the internet Corey! Actually, you probably do right now.

Hero’s Quest is renowned for being a genre-defining game, being a genuine adventure / role-playing game hybrid. It has a lot of standard adventure game features and is built on Sierra’s SCI0 engine (the same one that was used for Leisure Suit Larry 2, Police Quest 2 and Codename: ICEMAN), yet it also contains many characteristics of the RPG genre. These include character class selection (fighter, magic user or thief) and character statistics that really do influence play. There are abilities such as strength, intelligence and agility, and skills such as parry, stealth and magic. I believe Beyond Zork had introduced a strong RPG influence to adventure games some years prior, but since that was Interactive Fiction, Hero’s Quest was the first graphical adventure game of note to do so. The game also introduced an increased level of realism, with day and night impacting play both visually and from an encounter perspective. The main character has to eat regularly and becomes tired from running and fighting, requiring rest and sleep. I don’t really recall having to eat, but I definitely recall having to watch my stamina while fighting. I’m genuinely interested to see how the combination of my favourite genres holds up today! 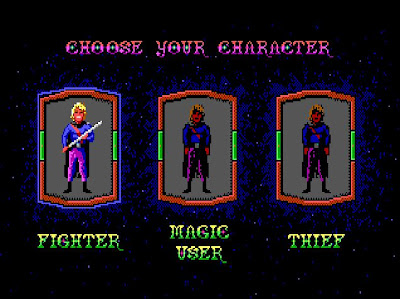 The moment the genres were blurred

I believe I have played both the original SCI0 version of the game and the SCI1.1 version that was released in 1992 (both in my early teens), but I can’t be sure of that. The remake drops the text parser for an entirely point and click approach, and while it’s once again tempting to play the shinier version, I’ll be playing the original so I can make a fair judgement of the game compared to others of the same period (I’ll likely play the remake when we reach 1992). Thankfully both versions came in the Quest For Glory Collection that I purchased from GOG in preparation last year. Quite a few readers have also made that purchase, and others have since won the collection for predicting what score I will give each game. Since Lars-Erik (our awesome sponsor) has already sent me the GOG gift key for Emmanuelle and I’ve temporarily skipped that game, I will be offering the collection to the first person to solve my riddle below (the next game is on me Lars-Erik). Regular readers will know where to find it. I do hope the winners play along with me, and make sure you all visit Chet’s blog at http://crpgaddict.blogspot.com in the coming weeks to see his take on things. I believe he’ll be playing as a thief, while I’ll be entering Spielburg as a fighter. Why? Well, as Chet would say...because! 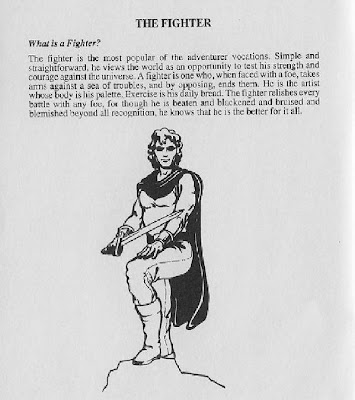 The Famous Adventurer's Correspondence School booklet that comes with the game is pretty cool too!


Note Regarding Spoilers and Companion Assist Points: I've recently written a set of rules regarding spoilers and companion assist points. Please read it here before making any comments that could be considered a spoiler in any way. The short of it is that no points will be given for hints or spoilers given in advance of me requiring one. As this is an introduction post, it's an opportunity for readers to bet 10 points (only if they already have them) that I won't be able to solve a puzzle unassisted (see below for an example). If you get it right I will reward you with 50 points in return (it's going to keep going up until someone beats me)! It's also your chance to predict what the final rating will be for the game.

From now on voters should pick whatever score they want, regardless of whether someone else has already chosen it. All correct (or nearest) votes will go into a draw, which I'm yet to figure out the form of (we'll cross that bridge when we get there).


Extra Note: Once again, Lars-Erik (well, I will this time) will gift the next readily available game on the list to the reader that correctly predicts what score I will give this game. So, if you predict the right score (or are closest), you will get 10 CAPs and a copy of the Indiana Jones and the Last Crusade from Steam! Good luck!
Posted by The Trickster at 21:57

Email ThisBlogThis!Share to TwitterShare to FacebookShare to Pinterest
Labels: 1989, Hero's Quest: So You Want to Be a Hero?, Introduction, The Trickster