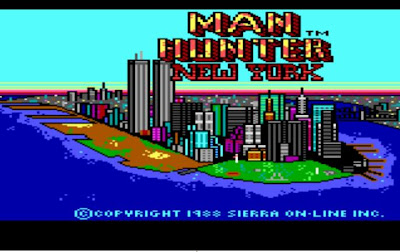 It's actually quite sad to see the twin towers in a game set in 2004.

Finally I’m ready to move on from Larry 2 to the 20th game on the list, Manhunter: New York. It’s yet another Sierra game that I’ve never played and one that has always intrigued me. In fact, a good friend of mine talked about how much he loved this game for years, encouraging me to play it. Unfortunately, that same friend recently cranked up DOSBox and played the game again, two decades after his original life-changing experience. He refuses to talk about it much, but it’s clear that his recent play through all but destroyed the wonderful memories he had from his childhood. In short…he wasn’t impressed. I however, have no Manhunter nostalgia to crush, so will go into this with fresh eyes and an open mind. Before I get underway, it’s worth looking at how the game came about and how it fits into the Sierra timeline. 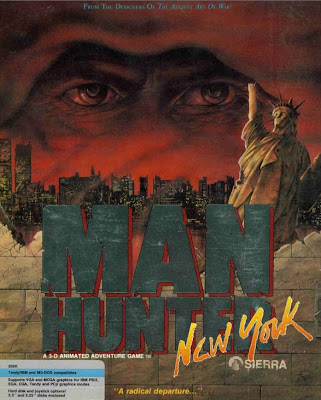 The box artwork sets the dark tone that the title screen fails to do.

Manhunter: New York was created by a company called Evryware, which was made up of what I assume is three siblings. Barry, Dave and Dee Dee Murry developed the game for Sierra On-Line back in 1988. Barry seems to have been the leader of the gang, being involved in the design, programming, graphics and music (Dave had a hand in the design and programming while Dee Dee assisted with graphics). This wasn’t the family’s first attempt at making a game however, as Barry and Dave had already had a fair amount of success with their The Ancient Art of War games, which were published by Brøderbund. In fact, it was the quality of those games that caused Sierra to get in touch with them to see whether they wanted to create a game for them using the AGI engine that the company had already built an empire with. Jumping at the opportunity, the Murry brothers were not satisfied with simply taking the technology and running with it. Instead, they decided to make something far removed from the standard Quest games Sierra were known for.

The Murry family, dressed in the monk robes (hired from a local costume shop) that the Orbs force humanity to wear.

After many months of design, the Murry’s finally decided their game would have much more mature themes than the likes of King’s Quest and Space Quest. It would be set 16 years in the future (2004 to be precise) and would have dark and at times gory themes. It would use real life locations, and they even spent two days in New York photographing locations that would make an appearance in the game. They chose New York as the city because they felt it lent itself well to the gritty, bleak landscape they had in mind. The backstory goes that the Earth has been enslaved by aliens known as the Orbs (giant floating eyeballs). The Orbs have implanted tracking devices in all surviving humans to keep them under control and it’s a capital offence for any human to speak at any time. Certain humans are enlisted by The Orbs as “Manhunters”, with the role of tracking down fellow humans that make any attempt to form an underground resistance. The protagonist of the game is one such Manhunter! 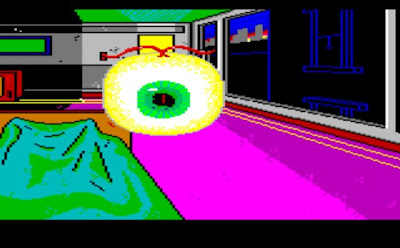 An Orb: Apparently the Murry's made them look like this purely because it was easy to animate.

It’s definitely worth noting that Manhunter uses Sierra’s AGI engine rather than the SCI engine that both King’s Quest IV and Leisure Suit Larry 2 utilised in the same year. I can’t find anything concrete, but I assume Manhunter was developed and released prior to those two games in 1988, making me wish I’d played them in that order. Still, this doesn’t look like a standard AGI game as the Murry’s totally messed with the system to make it do what they wanted. The end result is a game with no text parser whatsoever, making it the first Sierra published game to have a complete point and click interface. This path was chosen mostly due to the fact that no characters in the game were allowed to speak, so a substitute form of control was created. Manhunter: New York also includes a “first person perspective, bizarre camera angles, picture-in-a-picture, long pans, extreme close-ups, overhead shots and a faux 3-D sequence”, making it a truly unique game in the Sierra adventure canon to date. 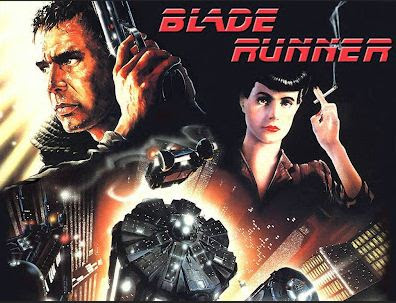 The influence of Blade Runner on Manhunter: New York is obvious, but it’s interesting that the player is enlisted to track down humans rather than the “replicants” that Decker chases in that masterpiece. I’m looking forward to seeing how that plays out, but I have to admit that the screenshots do not look appealing from a visual point of view. I’ve downloaded a DOS version of the game and plan to run it in DOSBox and also got my hands on the manual and a map that came with the original packaging. The manual is called the Official Manhunter’s Field Guide (Planet Earth Edition) and it describes the alien invasion through journal entries written by the protagonist. It also has the notice that was sent to all those humans selected to be Manhunters, which describes the obligations of the chosen along with the devices that are used to fulfil them. It’s a nice touch and makes me eager to get going! 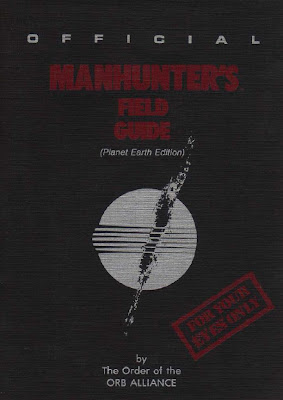 I miss the days of manuals like this one. They really do get you in the mood to play!