By IlmariThe sequel to Lankhor’s Le Secte Noire doesn’t have a very original framing story. At the end of the first game I had found a protective spell book stolen by a fiendish cult. Apparently this had not been enough, since the cult still held its meetings somewhere within an abandoned castle. The task of this game is to get rid of the cult for good. 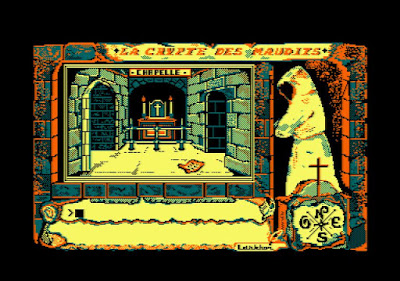 Starting the game, I instantly noticed some interface changes. The first game indicated all the possible exits in a room, and while this game also shows the cardinal directions in every screen, this is just decoration and has nothing to do with what are the actual exits. Another change is that there is no clock. As this was a feature rarely used in the first game, I am mostly happy that it’s gone.

You might remember I had difficulties in starting the first game, because I had no idea what objects in the screens weren’t just decorative images. It may be just that the castle interiors are otherwise so sparse, but I’ve had less difficulties in picking out objects I can interact with.In addition to the bottle, I could easily find a crystal ball, with a key locked in it, and a parchment.Although the adventure gamer in me cried, I did as the parchment told me and threw it in a fireplace. Nothing happened, but maybe it prevented a gruesome death later on. Similarly, I found a switch I could pull, with no discernible effect now. I discovered a few other puzzles. At one screen, three skulls were attached to a wall, with the middle skull grunting that it had lost its eyes. I also found a book, written in some type of code, and a strange machine, with some number keys to push. And of course, I found some locked doors.Following my experience with the first game, I tried searching the floor in every room. This proved fruitful, since I found a coin. I remembered a slot where I could use it, and putting the coin there opened up a gate to a new area. One puzzle definitely solved!

The new area I had opened revealed new objects to interact with. Almost immediately, I ran into a couple of books.I also found some things lying around the floors: a locked chest, a closed urn and a key. The key fit into a chest, and within I found another key. 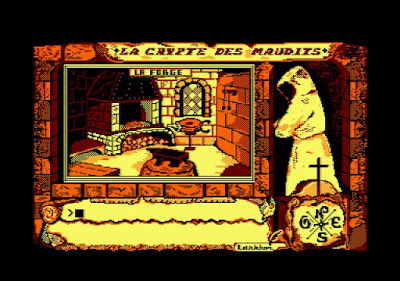 Moving forward I found a forge. When I pushed the bellows, the fireplace burst in flames. I tried putting various items in the fireplace, and the crystal ball exploded, revealing yet another key. 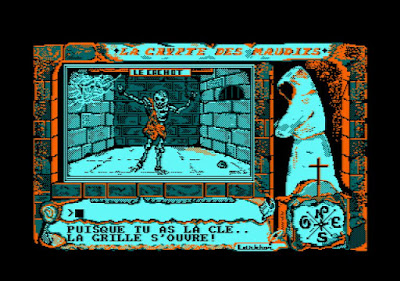 I now had a few new keys, and I had just come around a couple of locked doors. One asked for a password (no idea), but the other one let me in a cell, containing a rock that I could pick up and a skeleton. Trying my inventory items to the skeleton, I got a reaction, when I offered the skeleton my vial (maybe this was the reference to someone thirsty in the book in an earlier picture). The skeleton thanked me and told me number 5.

The rock was also immediately useful. I could break the urn with it, revealing a set of eyes. I instantly delivered them to the skull missing eyes, who revealed a key to a secret code. 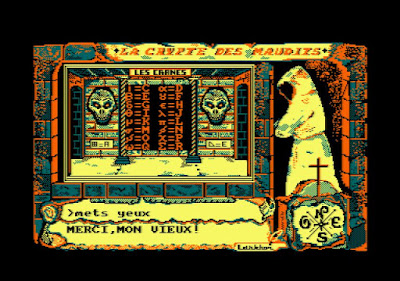 The symbols reminded me of the book I had seen at the very beginning of the game. Indeed, I could now decipher what had been said in it: three thousand, one hundred and two (3102). Also at the beginning of the game I had seen a machine where I could input numbers. Using the code I had just deciphered and the number I had learned from the skeleton revealed the word ALPHA. 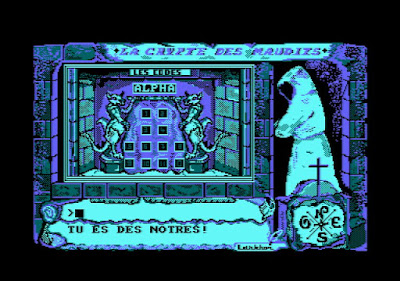 Could ALPHA be the password I had been asked at one locked door? Indeed, it was, and I was then instructed to change to the second disk. This is therefore just a perfect time to close the first part of the review. Don’t forget to guess the score!
Posted by Ilmari Jauhiainen at 22:00