By TorchWith a few exceptions games based on movies haven’t historically been known for their quality. Sometimes they are practically considered merchandise and are hastily slapped together to capitalize on the release of the associated movie. This game, with the snappy title An American Tail: The Computer Adventures of Fievel and His Friends, was released in 1993, 7 years after the first movie it’s based on (An American tail, 1986) and 2 years after the second one (An American tail II: Fievel goes west, 1991). In other words, it doesn’t seem like the game developers were aiming for a release that coincided with any of the movies. If they were, they certainly missed their mark, by quite a margin.So did the lack of pressure to release at an exact time help in improving the quality of the game? Let’s find out, with the help of our trusted PISSED ratings. By the way, I don’t think it’s a far stretch of the imagination to assume that this game was primarily directed towards kids, so perhaps I’ll be a bit lenient with some of the categories. Or will I...?

There’s not a huge amount of variation on the puzzles in the game. There are some objects to pick up and use or give to other characters. These objects are always easy to spot, often sticking out of their surroundings.Then we have some dialogue based puzzles. Actually, calling them puzzles is a bit of a stretch. Pretty much all of them are easily guessable or brute forced, usually only giving you a choice of two options at a time. If you fail, you can restart any conversation from the beginning, as if you’ve never met the person. The strange (or maybe lazy) thing is that this also holds true after you’ve successfully finished the conversation. The person you’re talking to will, in many cases, just ignore whatever you just did for them and recycle whatever they said last time.

Some of the puzzles are a bit nonsensical if you haven’t watched the movies (more about that later). Like, why do you give the broccoli to Tiger the cat? If you’ve seen the movie, you might know that he’s a vegetarian, but there’s nothing in the game that gives you any kind of information about that. Then again, that doesn’t really make the puzzle very hard, since you don’t really have a lot of different items, and Fievel flat out asks him if he likes broccoli (provided you manage to pick the right dialogue option…)I should mention the maze-like desert, where I guess the point is primarily to wander randomly around, dodging the scorpion, until you find the sheriff’s star and eventually get picked up by the giant bird. That section was a bit annoying, but mostly because I’d forgotten to save.

Finally there are the minigames. These are fun-ish, but most of them are quite easy. I struggled a little bit with the dots and boxes game, but it probably just felt like it lasted longer because the rest of the game was so brief. As I mentioned before, my total playtime was only 90 minutes, so the whole thing is clearly not a marathon. I guess you could theoretically get some extra mileage out of replaying the minigames, provided you plan out your saves.

The game is obviously mouse-controlled (pun intended). The cursor is a piece of cheese, and you click stuff to interact with it. You can hover over exit points on each screen, to see where you can go.

If you click Fievel himself, you get the inventory.If you click another anthropomorphic animal, you usually talk to them. It’s functional and doesn’t get in the way, but it’s nothing special.There’s also a systems menu where you can save, load, quit, mute the otherwise non-stop music or watch the credits.It’s not bad, but it’s also not revolutionary in any way. To be honest, the game is so short, and there aren’t that many things to interact with, so nothing really bugged me.

It shouldn’t come as a surprise that the story and setting are based on the first two of the American tail movies. While this is fine in itself, I found it a bit annoying how much of the story isn’t really in the game. It’s like the developers picked out some sections of the movie, made a game out of them and just sort of glued them together with the help of a couple of filler screens, some minigames and a broccoli.

I have to presume that the game is made for those who know the movies, because storywise it doesn’t really work on its own. Sure, you get a fairly detailed introduction to each chapter, but after that, things just happen without any sort of proper build-up.

Settings wise, the game takes place first in turn-of-the-century New York and then in a western desert town, though all characters are animals. Not sure what more I can say about it.

For the most part, the graphics are decent. Since it’s a licensed game, they’ve clearly had the opportunity to use some images from the movies. The problem is that those images, while looking great on their own, haven’t always been properly merged with the rest of the game graphics. For instance, Fievel himself is always the same size, regardless of the scale of the background, sometimes with strange results.Compare this with an actual image from the same scene in the movie.Fievel never moves very far from the center of the screen. He just takes a couple of steps before the screen changes, and he has limited frames of animation. Also they didn’t bother changing his clothes for chapter 2, even though he’s supposed to be in a cowboy outfit.The quality of the transition from movie to computer graphics is variable. Some efforts are pretty good:And then you get the occasional stinker 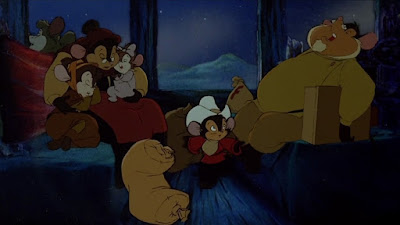 So all in all, the graphics are most of the time pretty, or at least decent, and now and then less so, but the majority of game screens seem to be made from downgraded versions of movie stills. Not that that’s an issue in itself, (though it may feel a bit like cheating), but the integration with the game specific graphical elements sometimes leave a lot to be desired.

As for music, there’s just a single track that repeats over and over. It’s a jolly tune. That fits maybe a third of the locations in the game, though it plays through the whole thing. It’s not too annoying in short bursts, but if the game was longer, I would probably have turned it off at some point.

There are pretty much no sound effects, except during the shootout with the cats at the end. Actually I think the music stops too, during that sequence.

The intro does a fair enough job of setting up the world and story. It’s just a shame that there’s so little of what follows. The game is almost too short to get any kind of atmosphere going. As I mentioned in the Story and setting category, it’s incoherent and doesn’t give you a lot of pretext for some of the things that are going on. Add to this that the protagonist’s sprite often sticks out quite a lot due to weird scales or colors not mixing in well with the background. In other words, there’s too much immersion breaking going on to really get into things.

The dialogue is for the most part simplistic, but sort of gets the job done, if you disregard my previous point about needing to have seen the movies to make sense of everything.It’s rarely particularly clever or funny, though it sometimes enters head scratcher territoryYeah, bite into those mouse burgersAnd sometimes they TRY to be funny, but… 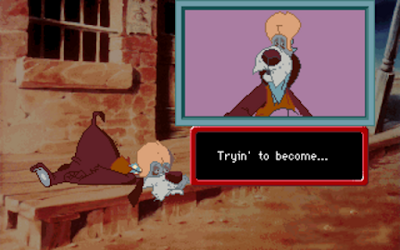 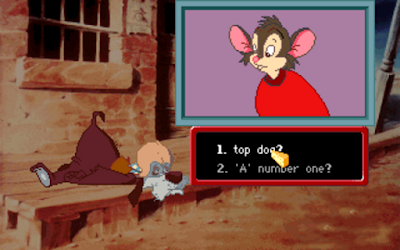 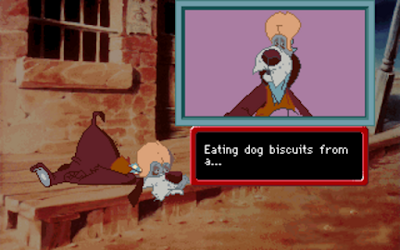 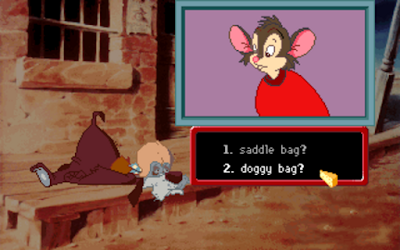 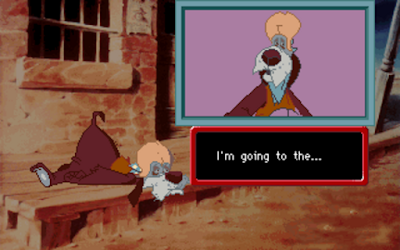 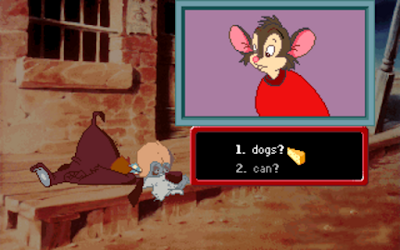 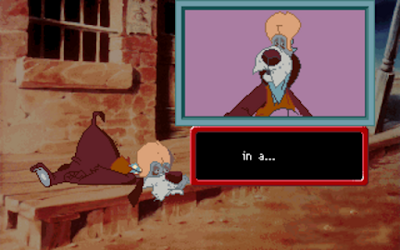 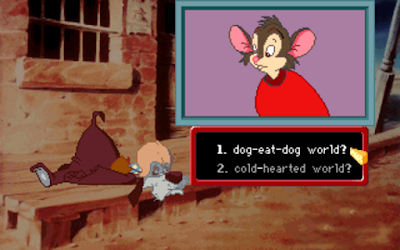 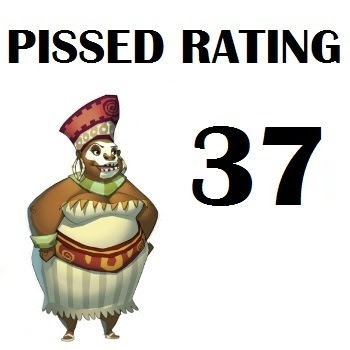 This means that Leo Vellés’ guess was spot on. Congrats!

Email ThisBlogThis!Share to TwitterShare to FacebookShare to Pinterest
Labels: 1993, An American Tail - The computer adventures of Fievel, Final Rating, Torch