An American Tail - Get Shorty

At this point I’ve elected not to watch the movie(s) before playing the game. Though it would probably give me a bunch of context, it might also give away plot points or possibly puzzles. Also, I’d like to see if the game is able to stand on its own feet with regards to storytelling, or if it will just assume that I already know what’s going on.

But let’s take it from the start. As you may recall from the intro post, I’m playing poor little mouse Fievel Mousekewitz, who just migrated from his home in Russia to New York, and got separated from his family along the way.

We start off at the dock in New York, where the only thing I can interact with is a somewhat suspicious looking rat, Fievel himself and a couple of exits. One thing of note: I can’t move Fievel around on a screen. He just stands firmly in one spot until I click an exit, after which he does a short walking animation.
Anyway, the obvious thing to do here would be to talk to the rat guy…. So I head for the exit instead. Yeah, that’s right… Don’t try telling ME what to do! On the next screen over, there’s another rat guy trying to get my attention. He looks kind of similar to the first one. What’s going on here?I decide to go along and click on him to talk to him. As you can see from the screenshot, the cursor changes to a speech bubble. 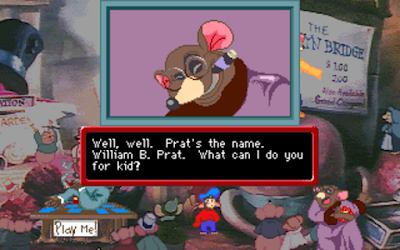 I feel that his name’s supposed to be a play on something, but I’m not sure what. 5 CAPs for the best suggestion!Ok, I agree to let him take me to my family. He seems to think they’ve fled into the sewers. At least that’s where he drops me off:In the sewer I meet the not so friendly Moe.This looks like a sticky situation. How am I ever going to get out of… oh, he fell asleep..I head for the exit and I’m suddenly back on the streets again. I find my way back to the docks and find that both the rat guys are still there. If I talk to William again, it’s as if we’ve never seen each other before. The dialogue options and responses are the same as before. I check out the other one, Warren T. Rat. If William, who’s clearly a bad buy, warns me about Warren, then maybe Warren is a good guy, right?Right?At this point I’m not sure if Warren and William are the same guy or just acting together. Anyway, I go back to Warren (who’s suddenly never seen me before) and explore other dialogue options, and suddenly I realize that he’s given me some money.

By clicking on Fievel himself, I pull up the inventory, and I can see that he’s carrying some coinsOn the other screen there was a guy with a sign that says “Play me”. I’ve gotten played a couple of times myself already, so why not try to turn the tables?

The guy offers a minigame that costs the exact amount of money I got from Warren to play. It’s a type of memory game that has to be solved in 15 turns.It’s not too difficult, so I pull it off in exactly 15 moves on the first try. For my efforts, I receive a deck of cards. Maybe I’ll be able to scam somebody myself.

After playing, I go back to Warren to see if I can get more money from him, in case I would have had to retry the minigame. He still suffers from short term memory and has no recollection of ever meeting me, so I get some new coins. Works for me.

There are still some areas I haven’t been to, so I wander around a little. There don’t seem to be a lot of screens around, but I meet another mouse/rat(?) who tells me to talk to someone named Tony about my family. A couple of exits later I find a group of mice.. or.. rats?..… let’s just call them people.I talk to them and ask about this Tony guy, but it looks like I need to play a new minigame to get anywhere.It’s the traditional con man’s game of “shells” (where you guess under which shell/cup/bowl a ball is hidden). It’s not very hard. I get it on the first try, and I only have to guess once.I tell him I’m looking for my family, and he instantly says he thinks he knows where they are. Now where have I heard that before..? Well, he looks less sketchy than the others, and he DOES look like a mouse instead of a rat. He wants to exchange something, “since we’re friends now”. I figure they like games, so I try to give him my deck of cards, and he gives me some dice in return. He then tells me to meet him at some rally near a park.

When we’re done talking, he leaves the screen, after which the other mice no longer have any recollection of ever having talked to me. Are they mice or goldfish? Sheesh… Talk about short term memory.. Anyway, I find a new exit and discover a new location, with a locked gate.The east exit from here leads me to what looks like an orphanage or something. Everybody here seems to be sleeping though, so there’s nobody to talk to or interact with in any way.I go back out again and discover yet another location where I haven’t been before. There’s a mouse here, but he ignores me.
It sure looks like a drainhole, which means sewers again, but I can’t NOT check it out. ‘Cause you can’t spell “adventure game” without adventure.I run into a group of cats, including Warren, who, upon closer inspection, DOES look like he could be a cat in disguise. They capture me and put me in a cage. Then Warren leaves for some unknown reason, to be back later for questioning. One of the cats comes up to talk, and looks kind of goofy-looking, which in cartoons is usually a sign that he’s actually secretly nice and not too bright. 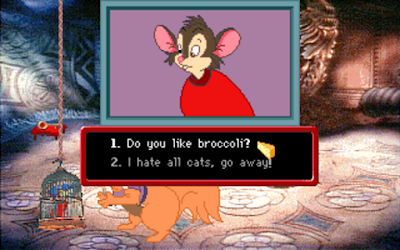 Yeah, so I give the goofy cat the broccoli I found on the ground in the sewer, and he lets me out. Before I leave I notice a key lying on a stool, so I swipe it. I have a hunch about where it might fit.Not sure what I’d need an old rats’ skull for, but whatever. The gate surprisingly doesn’t lead anywhere, so I explore all available paths again, and end up at what I guess must be the rally Tony was talking about. At this point I’m starting to wonder about relative sizes of the characters in this game…Anyway, from here I find a path to a sort of backstage area, where I meet Tony.More giant mice. I suspect these screens are actually stills from the movie, and they just didn’t do any work with scales. Anyway, I speak to Tony, who tells me Gussie (whoever that is) is trying to figure out what to do with the cats. Heand introduces me to her.I have two dialogue options, one of which is insulting the woman’s accent, and the other is to claim to have a solution to the cat problem. Fake it ‘till you make it, I guess. Fievel automatically recounts a story his father used to tell him, about the “giant Mouse of Minsk”, which is apparently something they can build. But to do so, they’ll need three (seemingly random) items.Since I’ve been a good adventurer and picked up everything that wasn’t bolted down (ie. everything that wasn’t part of the background), I’m already in possession of the mentioned objects, so I head straight to what I thought was an orphanage, but is actually the warehouse mentioned. Once there, I meet my father (and presumably the rest of my family, though they’re not shown).They’ve started building the giant mouse already, even though I was the one who suggested it, and I have the last 3 (or only) items they need for it... I guess we’ll just have to pretend more time has passed between the rally and the warehouse. I hand over the items and I’m presented with a third minigame. This time it’s about rearranging the pieces of a puzzle.After I finish the puzzle, I get a short slideshow sequence. 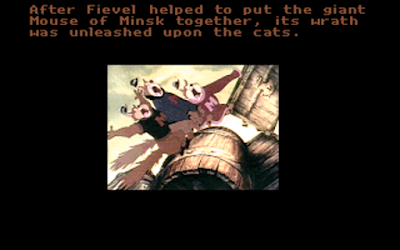 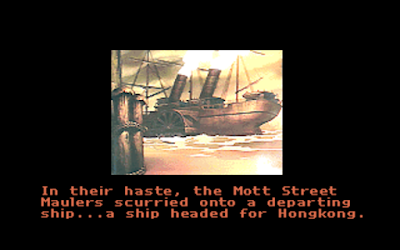 So it basically looks like I’ve finished the first part of the game, which corresponds with the first movie, and I’m now heading into the part that deals with the second one. Which would be fine, except for the fact that playing through part one took me just 30 minutes(!)

Do not adjust your set! I solemnly swear that I did not use any kind of walkthrough, and I didn’t purposely try to rush anything. I DID get through all the minigames on the first try, but it didn’t look like it would take a lot of time or effort to redo them. Granted, I didn’t exhaust all dialogue options in every situation, but rather tried to pick the ones that looked like they would bring about some progress. I may also have been a bit lucky with the order in which I visited some locations, but pretty much all areas seem to be available from the start, so I’m not sure I could’ve played it very differently. If the second part is the same length, then we’re not looking at a marathon here, but I guess we’ll find out after my next post.

By the way, my experience with the game story so far is that it feels like I’m expected to have watched the movie, to make full sense of the plot and the characters. We’ll see if that changes in part two. Until then.
Posted by Ilmari Jauhiainen at 00:00