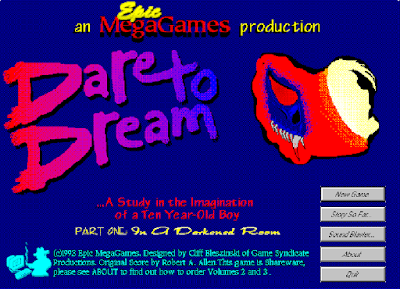 It’s main game time! After two games set in the “palace of deceit”, Cliff Bleszinski decided to take a different approach for his third game. Conceived as a shareware game in three parts and written for Epic MegaGames, Dare To Dream is more polished, more immersive and generally more advanced than its predecessors. It is still a shareware game and probably shouldn’t be made to compete with mainstream classics like Day of the Tentacle or Gabriel Knight: Sins of the Fathers, which were released the same year. But all things considered, it looks, plays and feels much more like a professional product than the two high-school outings I’ve previously played through for this blog.Epic MegaGames was founded as Potomac Computer Systems in 1991. Present CEO and then founder Tim Sweeney is still one of the more recognisable names in the games business, and the company produced several classics in the 1990’s and developed some strong franchises in the 2000’s, starting with Unreal and continuing with Gears of War, Infinity Blade, and Bulletstorm. Cliff Bleszinski had come to Sweeney’s attention by distributing The Palace of Deceit: The Dragon’s Plight in 1992, which was not exactly a milestone game but had a workable interface and some good ideas how an adventure game should work in the age of Microsoft Windows 3.x. Bleszinski joined the team and went on to be involved in some of the most notable projects the company would ever churn out, and I’m sorry if I repeat myself here but it’s still amazing to me that the same guy who programmed Dare to Dream also came up with Jazz Jackrabbit, Unreal and Gears of War. Bleszinski, or CliffyB, as he would become known more widely, got some serious name recognition for these feats, and before he left Epic MegaGames (by then just Epic Games, although they were arguably more “mega” than ever) in the mid-2010’s, he was one of the faces of the company.

Another beloved shareware classic that is held in high regard by connoisseurs like Clint Basinger had been written and released by Tim Sweeney himself in 1992: Jill of the Jungle. While no-one could beat Apogee in the early 1990’s shareware business, Epic did a pretty good job of competing for second place, it would seem.

Dare to Dream would become game number 20 for Epic MegaGames, and only their second offer for Windows 3.x after an RPG called Castle of the Winds which was not developed in-house and should be coming up on the CRPG Addict’s playlist soon. Just like its predecessor, Dare to Dream is a first-person adventure with an interface inspired by the old ICOM games for the Macintosh. We don’t play a dragon this time around but rather a ten year old boy called Tyler E. Norris who navigates his dreams. This surrealist premise sounds very interesting, and seeing that I have enjoyed games like The Institute a lot, I’m already intrigued. Let’s find out how Freud this blog can get!

I will play all three episodes back to back for this blog and rate them as one game the way they seem to have been intended. You select the episodes from the main menu (of the full version), and they are called In A Darkened Room, In Search Of The Beast, and Christian’s Lair, respectively.In the course of my research for this introduction, I was surprised to find out how many books with the title Dare to Dream there are: career guidebooks, an anthology of 25 “extraordinary” life stories, biographies of athletes and musicians (One Direction, for example), Rose Resnick’s autobiography, a feminist celebration of Canadian women, religious lifestyle guidebooks, and a couple of novels. That makes it kind of hard to come up with game reviews, and I haven’t found all that many. I won’t take a look until after I’ve won the game anyway but it’s good to have all of your proverbial eggs in a basket prior to starting a new endeavour. But now let’s load up the game and take a glance at the first five rooms, so you can make an informed guess how high this game will score.

The in-game background story starts from an interesting perspective. First, a bulk of text relates a psychiatrist’s thoughts about Tyler Norris who was brought to him by his worried mother because he was constantly mumbling strange things about someone called Christian taking control of him, visions of blood and skeletons and pain, as well as his best friend Terry being in danger. Already at the beginning of the session, Tyler collapses and cannot be interviewed any longer. After waking up he tells the psychiatrist what little he remembers. For the second screen, the backstory switches to an inside view of Tyler but narrated from a second person perspective, preparing the player for the in-game parser prose:

Your eyes languidly drift shut as the day ends. How much stress can a young boy be put under? First the grades, then the paper route, and, of course, the loss of a father that has been eating away at you for the past eight months. You’re now the ‘Man of the House’... Awfully big responsibility for a kid who turns eleven in two weeks. Life sure couldn’t get any worse...

The protagonist may be a child but this is clearly not a game for children. Tyler suppresses the trauma of the premature loss of his father, and the stress of his towering responsibilities makes him dream “increasingly more intense and realistic dreams.” You’re drifting off into an “absurd city of the mind”, and apparently have to solve your problems in the make-believe world of your nightmares. The third screen continues in this vein:

Certain events have thrown things awry, and now they must be fixed. Explore places in his mind he has created, meet his imaginary friends, and eventually find a way out of this twisted dream.

I start the game, and it immediately informs me that there is an “easy mode” for beginning and younger adventures – so this is for children, too, I assume. Now I think I should beat the game in normal mode first but I shall try out the easy mode just before the final rating, or does one of you want to play along and relate the differences in the comments? There is also a help function that can be turned on or off when starting the game for the first time. I leave it turned off for now and will try to pixel-hunt my way out of this particular paper bag myself.

The game drops me off in a dank alley (shown above), and just like in Palace of Deceit: The Dragon’s Plight, I have an intelligent cursor at my disposal. Once again, the interface is very intuitive, and I feel right at home. I can also click on some places that are not highlighted by the cursor, and the text window will display evocative and atmospheric descriptions. I pick up a polka-dotted pair of underwear off a clothesline that is hung across the alley before heading north to the front of Bouf’s Bar & Auto Repair. My options are to go right, go left or enter Bouf’s. I enter Bouf’s.

The place is “unusually dead tonight” while typically all the “’lounge lizards’” would meet here. Like Larry Laffer? A ten-year old boy shouldn’t be here, I guess? A red staircase leads up to a door but upon examination the game only tells me that “it’s a door.” Ceci n’est pas une porte? There is also a plug for The Dragon’s Plight on one of the signs inside Bouf’s. Where Bouf might repair them autos is anyone’s best guess, though.

East of Bouf’s I find the corner of Ben Ave. And Jazz St. Here there is a florist’s shop owned by your uncle Vinnie but it looks empty and closed. I find nothing else to do here, so I move on to the street corner on the other side of Bouf’s. Here, there are some people in the buildings across the street, so at least the city is not all but deserted. There are some traffic cones but Tyler won’t pick them up because it’s “probably illegal.” Is this your first adventure game, boy? 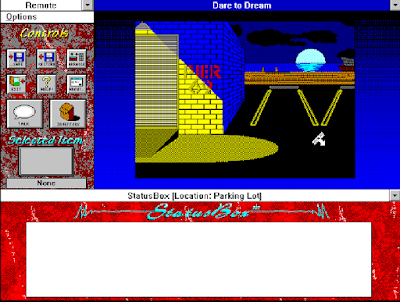 The next location is quite eerie – the full moon looms large over the harbour, and the parking lot in front of pier 69 has a bad case of the weird proportions. Also, this is where most of the murders take place in contemporary crime series. I should be moving along. Pier 69 itself is just as spooky, and there’s a deserted boat here. I can peer inside but nobody’s in there “right now.” Maybe I’ll have to come back later?

Now this is all I find for now. I’ll have to resort to some serious pixel hunting next because the other exits and/or hotspots appear to be less obvious. While I am mapping and experiencing my first few hours of gameplay for the next post, be sure to guess the score in the comments. So far, I’m really excited. Are you, too?

Note Regarding Spoilers and Companion Assist Points: There's a set of rules regarding spoilers and companion assist points. Please read it here before making any comments that could be considered a spoiler in any way. The short of it is that no CAPs will be given for hints or spoilers given in advance of me requiring one. As this is an introduction post, it's an opportunity for readers to bet 10 CAPs (only if they already have them) that I won't be able to solve a puzzle without putting in an official Request for Assistance: remember to use ROT13 for betting. If you get it right, you will be rewarded with 20 CAPs in return. It's also your chance to predict what the final rating will be for the game. Voters can predict whatever score they want, regardless of whether someone else has already chosen it. All correct (or nearest) votes will go into a draw.
Posted by Ilmari Jauhiainen at 22:00

Email ThisBlogThis!Share to TwitterShare to FacebookShare to Pinterest
Labels: 1993, Dare to Dream, Introduction, Will Moczarski