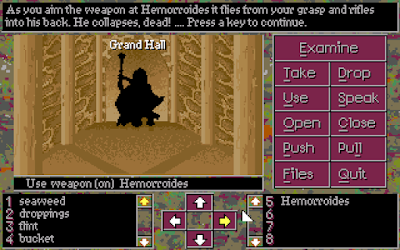 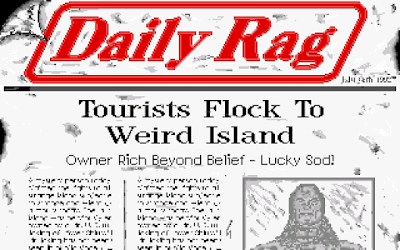 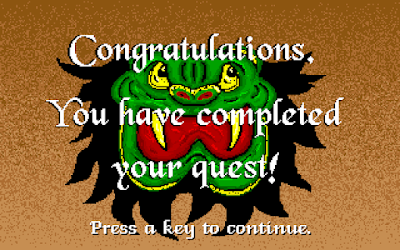 So I win and apparently my island becomes famous for some reason. Well, I say some reason, but I'm willing to be its people looking to be on an island owned by a murderer. Not many islands where you can say that, can you? Something tells me the novelty of that is going to wear off real quick.
The game quits there, with the message:

On the other square, to the left, was elegantly engraved in capital letters this sentence: ALL THINGS MOVE TO THEIR END...

With that, let's get on to the rating.
Puzzles and Solvability:
Puzzles are supposed to involve some thought, right? More thoughts than, well, obviously I have to use this here. Some of these puzzles are so obvious I hit upon the solution without even realizing I solved a puzzle. How else would one interpet me randomly throwing a vine up at a tree? Certainly not satisfying for that matter.
But then we have the parts that are difficult. If I hadn't been randomly using items I would have never thought to blow a musical shell underwater. In a game where I'm a normal human, I have no reason to think that's possible anymore than I think its possible to imagine a new color. Then the bell puzzle, which I'm sure has some obtuse solution I missed. I think of all the adventure games I've played this has to be the worst. Zombi wasted your time, but this just ticks all the bad adventure game puzzle boxes.
0
Interface and Inventory:
The keyboard controls for this were actually really well-done. Pressing a letter, then two numbers is a really intuitive system. Moving through your inventory items or the scene's items are awkward, but rarely comes up in a troublesome way. Really, only the bell puzzle again, but I'm harping on that now. The inventory limit was effectively meaningless, because every item was used only once, no repeats or anything. I suspect several items were useless, but its of so little consequence that its hardly worth counting against or for it.
6
Story and Setting:
Like I said at the beginning, the plot of this seems stupid even for a game that isn't focusing on the plot. Did nobody think to be concerned about the previous owner not showing up? Presumably it ends when I murder Hemorroides, which I have no real reason to do so. Sure, he kidnapped a dude, but last I checked the cops aren't okay with people stabbing people for that. Maybe they are in Britain, I'm not sure.
The island had too much dead space in it, presumably meant to show in-game space, but there are like 30 rooms here, some of which have no reason to exist. There are three beach areas for instance, each with the ability to use the sea. Some rooms exist only so you don't find even more items on the regular path. I did find the sandcastle and the underwater area interesting, but not enough to make up for everything else.
2
Sound and Graphics:
It is rare for PC Speaker to be good. It is rarer still for it to be good after the '80s. By this time, its not really a concern for anyone and I doubt there's much point in trying.
I feel like this guy, if he tried a little more, could do something decent graphically. There's the start of something solid underneathe the awful shading and questionable human anatomy. Perhaps that's intentional. The sepia-tone graphics seem to indicate that was the case. While I like that in theory, the end result is not appealing. I will say it made for some pretty light in size screenshots.
1
Environment and Atmosphere:
This island feels distinctly like something I'd find in the Pacific Ocean, interesting how some Roman slaves got there. I also get a little Mayan influence from the tomb and temple, what I could reach anyway. Its the sort of thing that should be greatly appealing, but doesn't really feel like that. Its more like seeing Hawaii through the eyes of someone with crippling depression. Its novel, its interesting for a second, its just not something I ever wanted or plan on playing again.
For a game banking on being weird, Weird Island sure feels...not exactly weird. It feels like its trying too hard. Picking up bear droppings feels like something someone pulled out of a hat. It is weird, but at the same time, I spent the entire game holding bear droppings. Its like a practical joke the author is playing on the player. The thing about that is I have to look back on the joke at some point and say, that's actually pretty funny, good job. Bad job.
3
Dialog and Acting
One of these days, I'm going to play a game with good dialog. Today is not that day.
0
Final Rating
That's 6+2+1+3/0.6=20. That puts it in basically the same range as the rest of the shareware adventure games. Bad. That's harsh, because this just doesn't feel like a game to begin with, more like something you gawk at briefly before doing something else. But I have to admit this game is going to give me one lasting impression, I'm never going to spell hemmoroids right again. I don't even know if that was right. 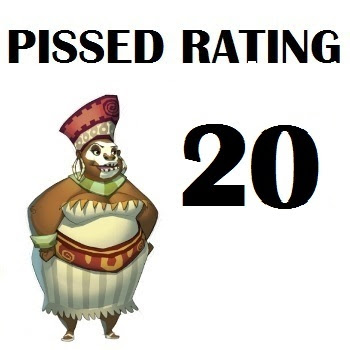 Next time, I'm going to tackle a game that befits both the missed and classic part of a missed classic. What did I mean by this?
Total Time: 2 hours
Posted by TBD at 14:11