It won't be long now before Alberoth is defeated, but first I have a few loose ends. Throughout most of the game two unreachable rooms have confounded me. Well, I'm not supposed to be able to enter them, but I shall phase through the walls of reality to see what lies in them. Don't try to imitate what I do, this is something for masters of reality like myself. The walls into nothingness are very subtle and hard to spot.

The room on the 1st basement, the one that throws noise on the screen, tells me there's a scream and teleports me away...has nothing. It is a bit sloppy though, but nothing too terribly interesting.

That wasn't surprising, but what was going to be interesting to me was the other room, on the 2nd basement. This one had a book in it. Given that no one would ever see it without hacking, surely the developers would throw in some kind of joke? Maybe hurl vile insults at me for my vile acts against the walls of reality? The answer is rather boring, the book's there, but it has nothing in it. You can't read it. Seems lazy, rather fitting.

Now, since I was phasing through the walls of reality anyway, I thought I'd see what happened if I phased into a wall or beyond the playing field. I already accidentally crashed the game with my item trick, but I was looking forward to what chaos I would cause here. The answer is more interesting than it sounds. See, because I'm phasing into a place no one should be, it's clear that they didn't prerender any specific graphics for this area, or any area. This is interesting, because it means they didn't just render the parts they needed, they just rendered each "block" of the map in a bunch of different ways depending on where it is in relation to the player and other blocks. I'd do more of this, because this is fun, but I have an elder god to kill first.

So, let's get into the bit that I failed to get past, the electrical field. As Ilmari said, I just have to time it right to get the meteor fragment inside the altar. Then left-click and drag. Which is not super fun when you're trying to get the timing right. I'd wager even if you knew exactly when to do it, you'd probably get hurt at least once. If you're just guessing, you're likely to just hurt yourself and assume you're doing something wrong. Wait a minute...that is what happened. Keep in mind that I've mostly been just right-clicking and selecting things from the drop-down menu. Even left-clicking has had a mostly limited effect to that head on the ground floor. I haven't really had to handle things like that all game.

Then I have to bring it up to the 1st basement, through all the winding corridors. Then after putting the mirror on the ground, adjusting it, I put the meteor fragment into the slot. This creates the Eye of Agla. In order to get it out, you have to left-click and drag it, still annoying, but at least not hurtful and I know I have to do that. It doesn't really look like an eye, or a jewel or anything but a mystical symbol really. Don't know why I needed to do this, we could have just had it in the temple. Then it's time for the final confrontation. I'm going to be entering the lair via the cliff entrance, because that's less annoying.

You have to have the Eye of Agla in your hand in order to enter the lair itself. In the Lair of the Beast I have to navigate all around a map full of moving portals and fire fiends. Its like the forechamber, except there's more of it and it's less fun because you actually have to save up mana and health to kill something of vital importance. So I have to dodge around monsters I can't really lose, which is not what I call a good time. After I explore the entire map, I see no places that have a big "DARK TRIUMVIRATE MEMBERS ENTER HERE" sign on them. Which means a handful of things, none of them fun. One of the portals lead to Alberoth, there's a portal in the wall, or my favorite method of finding elder gods, walking through walls.

It's walking through walls. At the end of a long corridor, if you're paying attention at this point, and if you're not consulting a walkthrough like a Bible, you certainly are, there's a wall you can walk through. Then Alberoth just sort of pops out. It just sort of happens. I was expecting...buildup? He kills me, because I just sort of take a hit, then start using the medikit, and he just demolishes me. Alberoth just sort of covers the screen with his attack spells.

So, after reloading, I open up with an attack salvo, not expecting to do much damage before getting hurt and having to spam health spells until I run out of mana. See, I have around a 1-in-4 chance of getting the good attack spell, Wind of Destruction to hit him. I'm woefully outclassed here because I didn't have enough points to raise my attack spell considerably, so I just raised willpower. Even then I still don't have a much better chance. But lo, and behold, on this final section, I have unlimited mana. Which means this is just a matter of spamming healing spells and Wind of Destruction. This is really fun and not annoying.

Then, as Alberoth flies away, I'm left wondering what just happened, and just how unsatisfying this section was. Then it quits to DOS...because instead of opening up with LEGACY.bat, I've been running it straight from LEGSHIP.exe. So, after killing Alberoth again, let's see the ending cutscene... 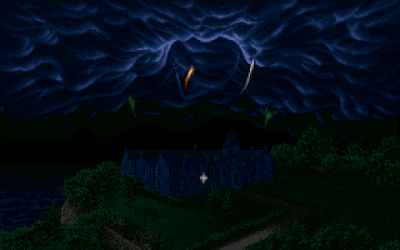 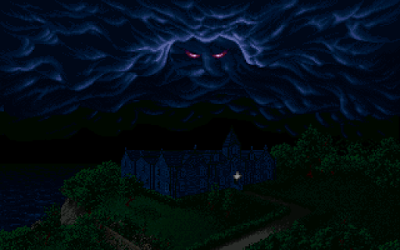 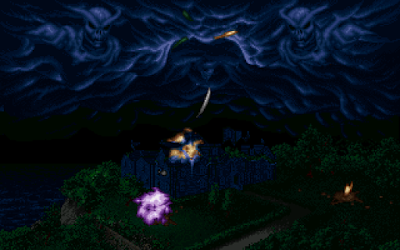 I don't know where to start with this. Ghosts escape, a face appears in the sky, the house gets hit by lightning and gets destroyed, two more figures appear in the sky, and then the house explodes. Uh...cliche is a word I might use. This is...not very exciting, to be honest.

Then we see a newspaper...is this the only thing that happened this week? At least the player is alive...I guess. Surprised the cops even care considering the series of events that led to this. Hey, maybe we should get an image of that cruise? You know, as a reward? Like in Covert Action, they'd have a beach scene if you nabbed a criminal mastermind. You know, that was a better adventure game than this. After the cutscene ends, the game creates a file to indicate you won, and tells you to keep it around...for the sequel I guess. Wonder when that's going to be released. A couple of the guys came back to do updates of some of their games and I'm sure they'd love to make a continuation of the game that killed their company and careers. Well, game careers, anyway.

That's Legacy, a game that's taken me ten years to beat. Both in actuality and what this playthrough felt like. We'll see how that goes on the rating. I dunno, I'm thinking a 100/100 boys and girls. I don't see anything here bad at all! Having more hours and entries for a game means that game is better! Clearly, this is the greatest game of all time!

Because the game's text files are just out in the open, I thought I'd take a look through anything interesting, to see if some of the puzzles I couldn't solve had solutions in-game...at one point. This isn't going to affect anything, like ambrosia, just because there's more of it, doesn't mean its more perfect. 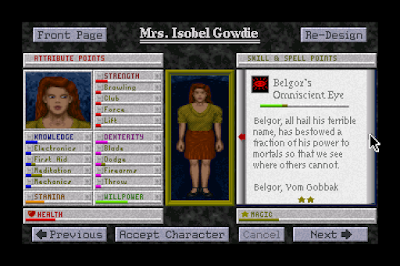 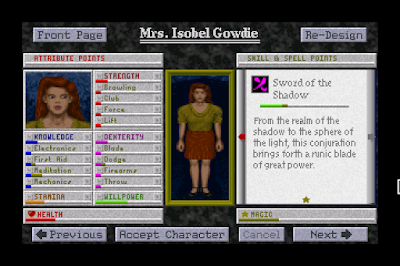 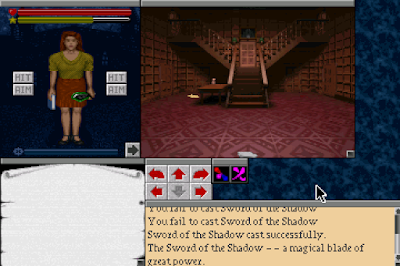 There were two spells that didn't appear in-game, Sword of the Shadow and Belgor's Omniscient Eye. Eye does nothing if you cast it successfully. Dunno what it's supposed to do. Maybe see something you can't otherwise see. Probably why they never went with it. Sword...gives you a sword. It doesn't seem to be all that powerful, but then, I only used it against one zombie. I would have tried it against more, but when I added the spell to the character I gave full stats to, the game crashed. There's a little tip for all you would-be hackers out there, don't give spells to characters that don't start with them, you'll only break things. Curiously, after screwing around here, the character creation had what I would call a shuffling sound added. Probably the scariest thing that happened in the game. 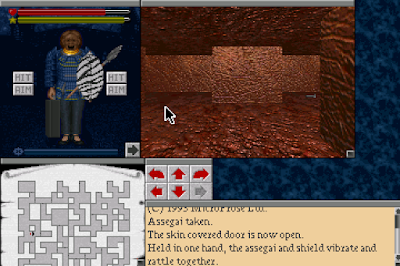 One thing I didn't notice is that you can combine the spear and shield together to get a single item. I feel like of all things, this is something that should have been explained somehow. There's nothing else interesting, except that the magic crystals were supposed to stick around after having been used up.

There was one note I couldn't find in-game. One from Josiah Maitland about finding Hildebrand's dungeons, the caves and rock fiends. Presumably I just missed it or just forgot about it. But, remember how I kept wondering where Marcus Roberts of Boston was? The way it's set up, it makes it look like Marcus Roberts died trying to take out the shotgun zombie. This sounds weird because this is after he let out the zombies from the mausoleum, where the shotgun zombie was.

Now this is where things got interesting. Now, I don't know if I can actually get these things out in-game, because I'm not that dedicated, but there were a lot of possibly interesting situations. The Magician of the Right Hand path could have been banished, and if you did do that, he'd come back later, thinking you're evil.

A file called GHOST2 had the ghost of Lawrence Mayhew tell the player not to enter a gate. Might be connected to the organ portal somehow...?

Carl Winthrop, who you might recall offered no answers for anything, might have told the player something in exchange for a token, but that token might be intended as a trick on the player's part, as Carl warns of an old man trapped somewhere, before fading away. I still have no idea what the hell is going on with him, or that mysterious other Winthrop. Maybe it's for a sequel.

Posted by Ilmari Jauhiainen at 00:00