Eric the Unready Journal Entry #5: I've finally defeated the Stygian Dragon, and all it needed was the right clothes. And now I'm hanging out with various Gods at their Mountain - and they're not exactly filling me with awe.

When we last checked in with Eric the Unready, all the way back on 18th May, I'd been helplessly stuck and asked for assistance in covering my butt to protect me from dragon fire. I'd surmised that I'd need the chamberpot from the Pavilion of Tomorrow, but hadn't been able to get it due to a hungry spitting snake.

Vetinari came to my rescue by mentioning that I needed to use the rubber band.


1. You are right, it's a babelfish puzzle.
2. The first step is closing the shade (which you did), the second involves blocking the snake from swallowing the marble.
3. You need an item that you have, but it's not one of those you mentioned at the end of your post.
4. It's the rubber band.


Having solved that part of the puzzle, I try to get the chamberpot again and the puzzle continues. I brush against the catapult, which shoots the marble toward the gong before being stopped by my closed window shade and rolling into the viper's cage. This time the marble bounces off the viper's head rather than him spitting the marble out at the gong. With the marble rolling away the aardvark mistakes the rolling marble for his dinner and hits the gong on the way to eating it.

So I haven't quite solved the puzzle yet as the gong again alerts the guard troll who places the marble back onto the catapult.

My next mission is to stop the aardvark. I tie cord to aardvark which works well in stopping the aardvark brushing past the gong.

Because it can't be that simple, with the aardvark unable to reach his meal, he tries to get it with his long tongue, hitting the Crush-o-Matic switch which drops the weight onto a loose floorboard which flips up into the gong, again alerting the troll.

I try placing various items on the floorboard, and am surprised at some of the results.


I pick up my items, getting a nice little joke.


I also put my infinite backpack on the floorboard, hoping the combined weight of my items would keep it still, but that didn't work. Then I try standing on the board while wearing my full backpack.

When I get to the dragon's lair I am told that my sunglasses reveal a weak spot on the dragon's tail. I can shoot the dragon's weak spot, but it moves as soon as I've aimed, not giving me time to adjust. So now I have to predict where the weak spot will move to before I shoot.

I solved this puzzle fairly quickly. The dragon breathes fire at a part of my body and the vulnerable spot will move to that part of his own body after my next move. 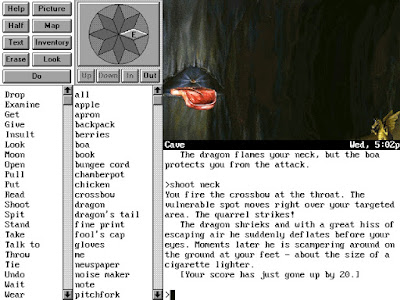 So now I have the Steak of Eternity, a new ring that is probably useful and a small dragon in my inventory – things are looking rosy.

In the standard end of chapter "Meanwhile” cutscene, I see Grizelda talking to her rhyming magic mirror. 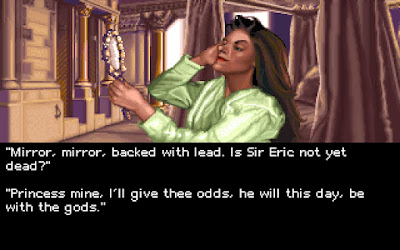 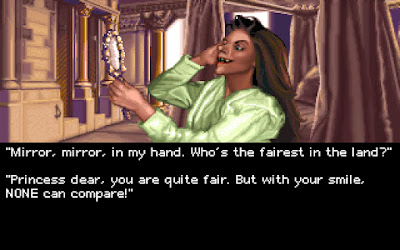 Day 6: Mountain of the Gods – Only the Penitent Man May Pass

I find myself in a pasture containing a unicorn and a newpaper. I pick up the latter and moon the former. 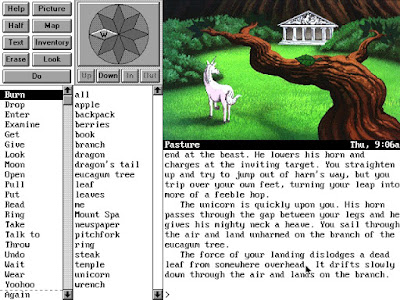 If you're wondering why the first thing I did when seeing a unicorn was drop my pants and moon the beast, I direct you to the previous day's newspaper.

I took the eucagum leaf from the branch and read my new newspaper.

Leaving the tree, I take the only exit available and end up at a temple. Outside the door is a robe, an offering bowl and 10 bells. A sign next to the door tells me what each of the 10 bells is for. 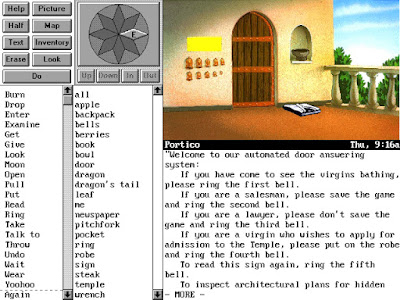 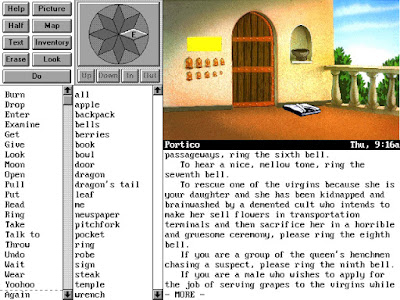 Before testing all the bells, I save my game and have to answer a question. 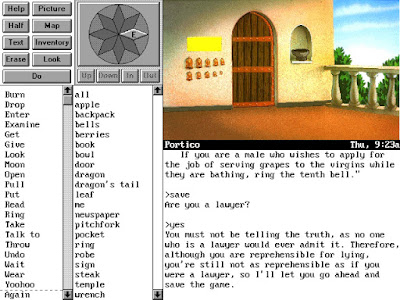 Most of the other bells also have little jokes when I press them. The ninth bell (the queen's henchmen chasing a suspect) has a voice telling me that I'm too early because he's not here yet – clearly a reference to Eric himself. I try to take the ninth bell to delay my pursuers, but can't. Ignoring that plan, I take and wear the robe and ring the fourth bell (I'm a virgin who wishes to apply for admission) to get access to the temple.

I'm let in and start at the Examination Room, where a virgin waits with me. I talk to her.


While waiting to be tested as a virgin, I try using some of my new items to see what they do. The deflated dragon works as a lighter if I pull its tail. The ring I found in the dragon's lair works a bit like Sauron's Ring of Power, but only half as useful. I become invisible from the waist up and am thrown out of the temple. I'm also thrown out if I remove my robe (because I'm a man and this is a female only temple.)

Trying again, I read the newspaper to my virgin roommate and she cries uncontrollably (probably from the story about the dead puppy – I suppose that explains throwing the sad story in this comedy game.)

My first thought when this happens is that virgin tears would be useful, and seeing as I have a hanky in my robe pocket, I try to get me some of those sweet, delicious virgin tears.


After a little time. another woman comes in with a unicorn. The unicorn doesn't like my smell and I'm thrown out again. I would have thought my hanky full of virgin tears would be helpful, but apparently not. I go back in, and this time try rubbing my eucagum leaf on the tear-drenched hanky. I don't think I had a plan here and was just randomly rubbing inventory items on each other, but I get 10 points for doing it so I know I did something right. Looking at my inventory shows that my hanky now contains some chow - unicorn chow, I'm guessing. I go back into the temple and this time the unicorn likes my hanky - proving my virginity, and I'm taken into the Salon after being told that we're currently having a festival where a virgin is sacrificed every hour – oh, joy!

I talk to the virgins and check out the sacrifice chamber to the north. 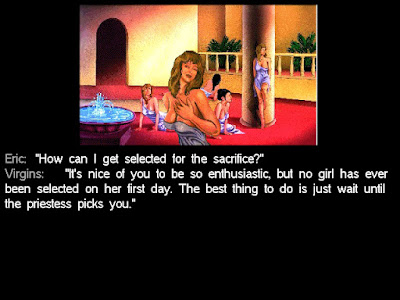 After a short time (i.e. on the hour) the high priestess and some acolytes enter, take me out of the sanctuary, and choose a virgin.

After trying various ways of listening to the door and failing to do anything useful, after 10 minutes we hear the scream of the chosen girl.

Now that the sanctuary is once again empty, I can explore in there some more. I enter the wine vat and find out that it comes up the my waist. As the ring makes me invisible above the waist, I think I have a hiding place.

I wait in the vat with my robe off and my ring on until the next sacrifice is brought in, and see what happens to the terrified girl.

I can remove my ring and talk to her while we wait for her gruesome death. 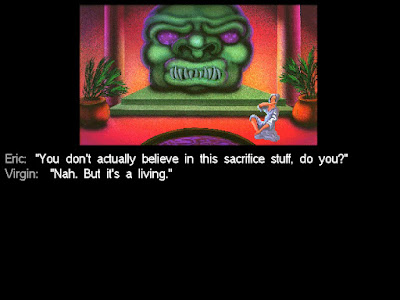 As usual, talking just gets me some jokes (not that I'm complaining - I like jokes). I try to get her to leave the room somehow but nothing seems to work and she sacrifices herself when Molochi opens his mouth by jumping in. The game doesn't give me a chance to jump into the mouth before her, and the mouth closes immediately so that's not the solution. 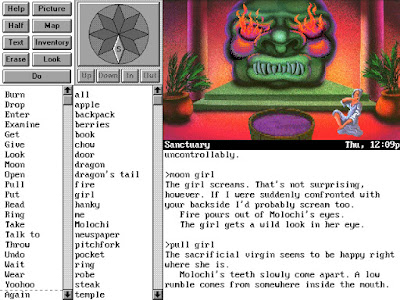 On a reload, I try giving the sacrificial virgin my sleep-inducing book, which works. 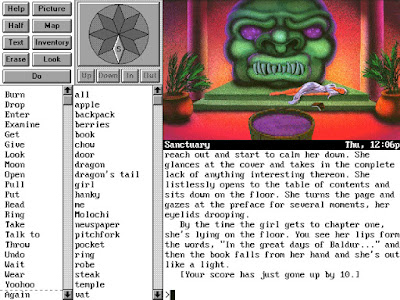 Now that she's asleep, I can enter the mouth when Molochi opens it, and end up...


Having saved a poor innocent girl from the horrors of slowly ascending stairs, I pop out at the top and meet a god. 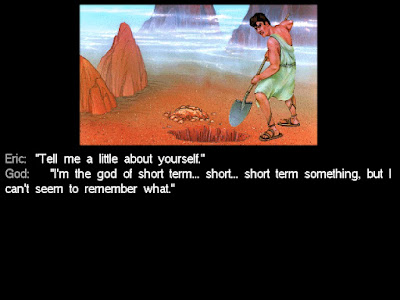 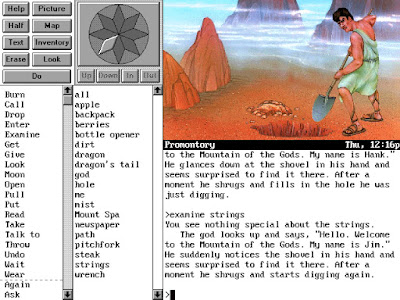 I can give him an item (I try with my pitchfork) which he takes – then he immediately gives me a present of the item I just gave him.

Apart from the Promontory, there are a bunch of locations I can go to up here. 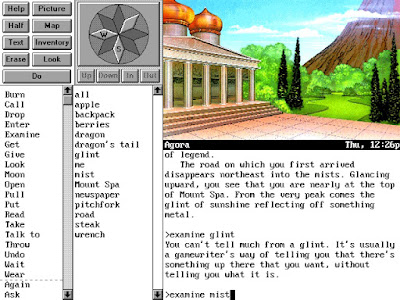 The glade is where the Goddess of Beauty rests, and the location of a key that I as yet can't get. 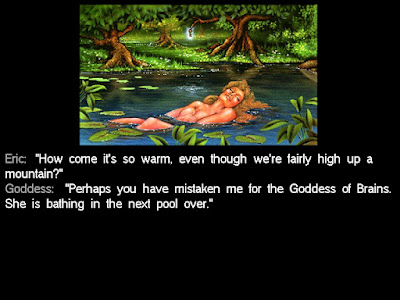 The God of the North Wind is here, along with some icicles. 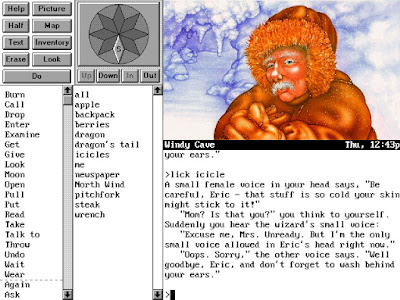 As I leave the cave, the god asks me to give a note to Morty in the Palace of the Gods. He also utters an incantation that will give me access to the Palace.

Palace of the Gods.

The palace of the Gods has a few areas, but I'll stop it here for now and explore the palace and the rest of the mountain area next time. And hopefully I'll take significantly less than 47 days to continue.

In the meantime, here's a partial map of the Mountain of the Gods so far...