Eric the Unready is the next graphic adventure game from Legend Entertainment, and the highest rated adventure game ever, according to Computer Game Review. 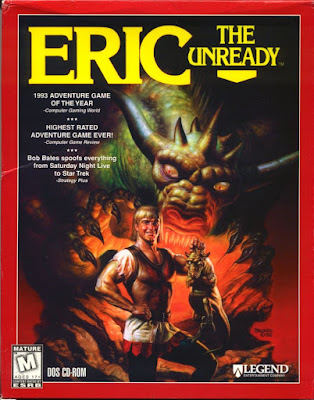 A quick glance at a screenshot shows that it uses essentially the same interactive fiction (with graphics) engine as Legend's other games, Spellcasting 101, Spellcasting 201, Timequest, Gateway and Spellcasting 301.


This is their penultimate[1] game using that engine, with the final game Gateway II: Homeworld, coming later in 1993. Their other game in 1993 is Companions of Xanth, which is a more standard 1990s graphic adventure.

As for the game, the title and name of the protagonist, Eric the Unready, likely gets its name from the historical English king, Ethelred the Unready. Though Eric's character has no basis on the historical person, and the name was likely chosen just because it seemed funny.

The designer of this game was Bob Bates, co-founder of Legend Entertainment. We've seen Bates' writing and design so far in Timequest (1991) and Gateway (1992). Joe Pranevich should also get to Bates' Infocom work during the Infocom Marathon, with Sherlock (1988) and Arthur (1989). Bates' love on Interactive Fiction hasn't waned, as his most recent work in Interactive Fiction was in 2017 with the kickstarted Thaumistry: In Charm's Way.

The introduction cutscene has our hero, Eric the Unready, go out to fight the dread Knight of the Black Pauldron.

The game gets its tone clear right out of the gate by playing happy, whimsical music and throwing out jokes about Eric's unreadiness.

He wins the battle in the standard comedy style of Inspector Clouseau - accidentally. Eric drops the book and his visor falls down. While trying to lift his visor he happens to be poking his lance upwards into what happens to be an apple tree. Apples rain down on the Knight of the Black Pauldron, knocking him off his horse and giving Eric an undeserved victory.

After his success, a feast was held in Eric's honour, where he knocked over a pot of oil while toasting, burning down the entire feasting hall.

It wasn't a surprise that this is not the first time Eric's clumsiness has caused problems, as his Shop Steward listed his previous highlights and put him on the equivalent of light duties suitable to his limited skillset.

The game then gives us our Legend Entertainment interface screen, which I expect to see a lot of.

From seeing the intro in both CD and Diskette versions, the most obvious difference, apart from the overly colourful SVGA stamp over the title card, was a pig squeal sound effect in the CD version and the higher resolution graphics, as seen below. 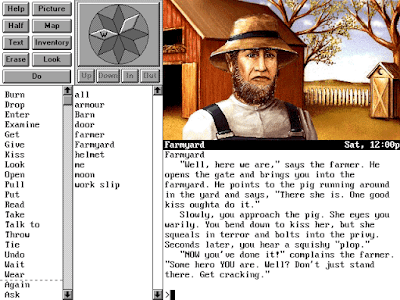 As for how good the game is, though I believe I've heard the name, it's not what I would call a famous or popular title. But it seems it might have been more popular than I thought.

It won Adventure Game of the Year from Computer Gaming World, along with Star Control II (a game that didn't even apppear in our list - mobygames lists it as an RPG)

It was Computer Game Review's highest rating adventure game ever - considering it's come after our current top games in Monkey Island 2 and Indiana Jones and the Fate of Atlantis, that's an interesting statistic.

In an interview on Adventure Classic Gaming, Bob Bates said Eric the Unready was his favourite of all the games he's designed.

Even some of our other adventure game protagonists give their testimonials on the back cover. 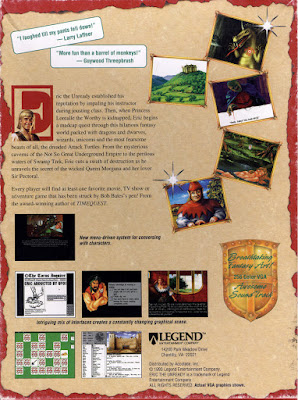 So will I rate this game as the highest rating adventure game ever? Will it get our Adventure Game of the Year Award? Is it more fun than a barrel of monkeys? While I'm not expecting an all-time great, I am expecting to enjoy it. Playing through the first mission has been a good time so far, so I have high hopes for the game.

[1] Editor's footnote: TBD keeps trying to use the word penultimate instead of the more common term second last, which is easier to understand and contains less syllables. He won't stop until he finds the occasion where penultimate gives more information or less confusion, and is therefore the appropriate word for the occasion. This is not that occasion.
Posted by TBD at 23:59