Diggie McGravery's Journal
“Oh man, I love this new job!. The town is already very quiet, but in the week I have been working as a gravedigger here, nobody has come to the cemetery. Well, only the priest, but he mostly keeps to himself. It was a bit weird seeing him for the first time, with his uncanny resemblance to me and always wearing a black robe with a red five pointed star but hey, what do I know about these quirky monastic orders, am I right? There are only two things that could spoil this experience for me. The first one is the continuous odor. I know, I know. Silly me. I work at a cemetery. It is normal that it smells like rotting corpses. It is only that this one reeks of it, you know what I mean? There is that, and the gigantic bat that comes every night at dusk and heads right for the church. It always scares some poor women there, because we hear the screams. I hope it will fall onto my new friend, the gardener, to clean that mess.

Hum, I just noticed I am missing my trusty shovel. Better make a quick run to the cemetery and get it before some rascal steals it from me. Maybe we can even pay a visit to the priest while we are at it and kill him. That’s what Boris wants” 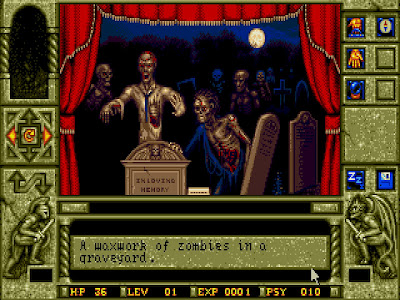 Two gone, two to go. And the next one by popular demand is the cemetery, which in many reviews is recommended as the perfect waxwork to start the game. After having played it, I can see why. It is very small and focused, with very little in the way of puzzles and surprisingly, at least to me, it even gives more insight into the lore of the game. But it is frustrating as hell. 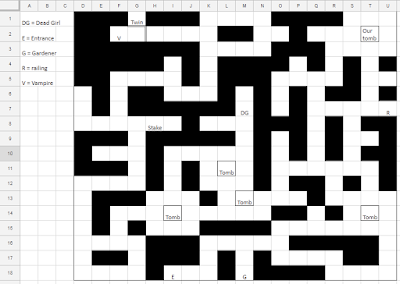 The source of that frustration is both exploration and combat. This is the first waxwork I have encountered where enemy spawn is random and limitless. And it gets to a point where you can be fighting 3 or 4 enemies one after another to keep advancing. It gets tedious. There is not a lot of variety in enemies. They are all zombies and you need to kill them by dismembering them. You have to cut their arms and then their head. But it seems to me like the combat here is not exactly working as the manual states. I have the feeling you have to click over the limb you want to cut instead of simply clicking in the third of the screen that makes your attack from that direction. Which is silly, because the arms are dangerously close to the middle third of the screen, and thrusting at them does nothing at all.


The other source of frustration is the exploration of the map. The “walls” of this map are graves, but the graphics make incredibly confusing knowing when you can turn left or right or when will you reach the wall at the end of your way. In the other maps, the distance you can see is two squares, but here it seems to be longer. In the end, you absolutely need to map this level, and to do that I had to keep turning right and left in every square to check for side paths.

After my traditional initial complaining, let’s get back to the waxwork. The story here is that there is this twin that got into necromancy. He became immortal with practice and eventually set shop in a graveyard, posing as a priest. He then started gathering the corpses of the previous good twins to enslave them and offer them to Beelzebub. He even has a vampire bodyguard, because we all know how much Horrorsoft loved putting a vampire in their games. Luckily, he got defeated by a gravedigger that forgot his shovel and turned out to be his brother.

We start as said gravedigger with nothing in our inventory. Soon after leaving the initial area, I came into the body of the gardener, that apparently was murdered with his own sickle. Which I took, as it is the only weapon in the level.


I used the right hand technique for solving mazes and soon came to a corner where a broken railing can be seen in the fence, so I took it. This is another complain of mine, as there is absolutely no clue that is there other than looking directly into the south wall of that corner. And I only did that because I as completely unable of knowing if there was a right turn there or not. I think I was lucky, because it seems quite easy to miss.


Following the path, I then found the tomb of our ancestors. Which is a tomb like any other of the ones found in the map, only this one explains that is our family’s. These are simply obstacles in the way, but they are usually in the center of a 9x9 squares area. This one seemed special, but even after contacting uncle Boris I got nothing on it. But he did explain a bit about the level. Particularly, how to fight the zombies and that for this level he would need a human heart, still warm mind you, for healing. And lo and behold, not long after I got to find the corpse of a dead girl with her chest open.


After some more exploration and fighting I found a stake that I could sharpen with the sickle and finally got to the church. I said finally because you can see the bell tower of the church lurking in the distance as soon as you step on the north or west side of the graveyard, as a reminder of your final destination. The final path to the church is constantly spawning zombies, so you have to keep going ahead as soon as you defeat one to advance. And on my first try I would swear that I was being thrown some kind of spell, some sparkling in the screen that ended up killing me. But in following tries to cross that path I didn’t get shot, so I am not sure.


Anyway, once inside the church, there is not that much to do. There is a door to the north, protected by some kind of force field that hurts us whenever we try to pass through. The other thing in the room is an altar. The infamous vampire bodyguard appears as soon as we get near it, but it is quickly dealt with by using the stake. The altar contains a cup, some bread and two candlesticks. Next to the altar there is a statue whose head can be twisted to remove the magical blockage.


And that’s it, quite an easy level. We can cross the door to ascend the tower and meet our evil twin. And he got to beat the crap out of me. Quite a few times until I understood I was missing something, as I could not damage him nor use any of the items I was carrying. After thinking for a bit, I either had missed something in my exploration or I had to do something with the tomb of our family, as it was the only special place in the map.

After going back to the tomb, this time I found a crack in its north side. Using the railing breaks the wall and allow us entrance to the tomb. Inside, there are four coffins called “The First”, “The Second”, “The Fourth” and the “The Last”. Inside the first one we can find the corpse of Druec, the first good twin and brother to the impaler, the evil twin that killed Ixona, the witch that threw the curse. And I know all of that because the corpse talked to me.

According to Druec, the only way to defeat the curse is for it to never have happened, which can be done after I defeat the trapped souls in the waxworks. Buf first, I should make sure to free the three of them, which have been imprisoned by the current incarnation of the evil twin to draw from their power. For that, they need a spellcaster that can free them and then they will help me kill the necromancer.

The Second is quite less chatty, first believing we were going to torture him and then sending us to talk with Druec. The Fourth doesn’t even have the option of talking. There was no one to turn to but uncle Boris, so I contacted him and told me that he can help the twins but needs something with absorbing qualities. I got the option to offer him the bread and he freed the three twins and put them in the ball, ready to help me fight the necromancer. This all seemed to me like artificially extending the played time, as the tomb is in the complete opposite end of the level, but what do I know? In any case, a quick trip back to the church and level completed.