Dirk Gentley Journal Entry #4 "I wonder how did we manage to get someone to fund a set full of so many horrors. There are rooms in fire, magically contained to the interior of the room as an added bonus, succubus, vampires, ghosts, poltergeist, a very ugly cook… I am dying to get out of here. I hope it is not literal. Oh, and no clue about Elvira’s whereabouts."

Time to solve some puzzles. First order of the day: the poltergeist at the sitting room. Bypassing this phantom is easy after Elvira’s hint. It wants something to play with, we just happen to have found a nursery full of toys. Leaving one of those toys in the floor makes the specter stop blocking the door and go to take it. The problem is to leave it in the same square it is in, as we won’t have enough time to go inside. Therefore, the solution is dropping one toy in the next square, giving us access to the library, the official hint guide for this game.

This is probably the most important room in the whole game. We have several shelves with books, with each individual shelf containing three books that can and should be read, as they hold the key to many puzzles in the game, including how to beat each and every enemy in the game. For example, the first row has three books talking about the studio itself, including some contradictory information regarding its ownership, citing that Elvira merely has a contract in spite of the manual stating she is the owner. The humour section will increase the score of this game, as it contains a fragment of “The colour of magic” and the complete comedies of William Shakespeare.

The ritual to summon a major demon requires a holy man to draw a pentagram of blood, one black candle to put in each corner of the pentagram and some ancient magic to bind the demon. For example, a magic bag from a tribesman wizard. How convenient that we already have the candles, the chalice of blood and are on our way to get the magic items.

The next section in the library is also quite useful: the horror section. The three books in the shelf are the three tomes of “Creatures of Horror”, divided in alphabetical order, which describe every single monster in this game. For example, let’s put a name to the ghost of the corpse upstairs:

Or the monster in the studio basement, which now we can call an elemental demon…

And so on, and so on… The Reference section contains random information regarding bungee jumping, radio communications and poisons. That last book drops the recipe for a venom that works underwater, which gives me an idea regarding what to do with certain voracious fishes. The Novels section only contains one book, but is a weird one. It contains fragments from several stories which I find kind of weird and have little relevance. Let me show you:

The Occult section contains a description of the items needed for a resurrect spell. The Medicine section, a biography on Doctor Frankenstein, and a description on how to use lightning to power electronic circuits. It might be just me, but I think I sense a pattern… And with that we end the library, probably because the designers had run out of things to put in random books here, because there are 4 more shelves with no books at all.

So let’s go back to fighting monstrosities and traps. But first, a little magic. I go back to the item pile and use one of the calendars I found in the offices to craft a fireball spell, which only requires a combustible item. I also use one bottle of wine to craft a Courage spell, which allows the caster to forget all fear. I then decide to go back to the dining room to get to the pantry again. This time however, I have a fireball ready to increase the temperature of the room, setting off the alarm. After a few seconds of waiting, the ugly thing that has put us here comes to see what set off the alarm, allowing us to use the fencing sword to end its suffering.


Going out the pantry leads us to a hall with a flight of downward stairs and another door. The door goes to the kitchen, where we can see the other side of the serving hatch and a lot of items like saucepans, food, a bucket… Inside a yellow tin can we find some glue, which is the only remarkable item here.

The kitchen has another exit that takes us to the trapped hall. Using the Courage spell allows avoiding the fainting, but produces a different death scene. None of the spells do anything to the zombie and it can’t be attacked. The only way left is down then. There we can find the basement, with two doors and a cell. The cell is completely empty but for a painting on the wall.

The door to the left leads to the Frankenstein monster.You have to admire the subtle foreshadowing of the library. Lucky for us, it seems dead, but its body is blocking a door so I am pretty sure we will have to recreate the infamous experiment. In the meantime, we can help ourselves to the collection of dissected human body parts in the lab, including a heart, a brain, an arm… Everything you could need to set up shop as a human organ trafficker.

The door opposite this one leads to the doctor himself. Although I don’t recall him being called Frankenstein. Which is weird taking into account that it is public domain. In any case, the doctor says that we are not his assistant and kicks us out of his lab. Which constitutes a dead end, as the door is locked afterwards and the collaboration of the good doctor is needed to finish the game.

There is just one thing left to do in this section of the house, which is killing the zombie in the hall. From its behaviour I can identify the monster as a Mimic. The library entry for the mimic states that they can’t be beat physically or by the use of spells. The only solution is to use spells that increase your might to overpower him. However, I found this to be very misleading. The only way I found to defeat it is to cast the “Turn Undead” spell, which requires a brain. In an exercise of good design, it turns out we already have a brain from the Frankenstein lab. Praise Horrorsoft! 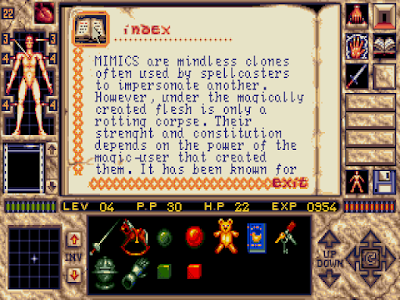 Now let’s deal with the doctor. He is expecting his assistant and we are not him. But we can look like him. And you all thought the costume and makeup rooms were good for nothing. If you recall our last adventure, we got a set of photos from the dead corpse upstairs. One of them is from a doctor, or more specifically, a doctor’s assistant. Using the photo as a guide, we can take the lab coat from the costume room and some makeup to look exactly like the photo. Well, approximately, as the use of the fake teeth is not reflected in the mirror, but as we are wearing them, it should be good enough. I kind of like this puzzle. It is not very intuitive to link the doctor’s request, which in pure Sierra style requires you to dead end yourself to know how to solve it, to the photo, but in spite of it, I like it. It is creative with the game engine and the items that can be found in the game. 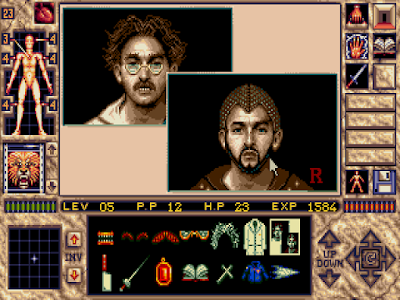 When we enter the lab now, we can talk to the doctor. Of the four options, two are a clear joke, while the other two can be useful. The first one is to ask him to mix a formula for us. For example, the formula for the subaquatic venom we got in the library. However, it is not as simple as that, as he tells us he is busy. Remember when I said I liked this puzzle? This is the part I don’t like. At all. There is a set of actions you have to do to get the doctor to mix the poison. I only got the right order because I knew he had to mix the formula but it took me quite a few tries to get it. If you touch anything in the room, he becomes annoyed and will not mix the formula. If you ask him anything other than “Can I help you?” as your first action, it is the same result. You have to ask that question first and then ask for the poison… if you have the formula with you. The funny thing is that asking the “Can I help you?” question in any other order produces a different answer that can kick you out of the room again. Funny.

Before going to get the key, I went upstairs to the succubus room. Casting the courage spell prevents the death, although I only knew this from my memories of playing this game before, as I couldn’t find any hint regarding how to beat this monster. It is actually a little disappointing also, as it is the same animation but with the succubus disappearing at the end. In any case, we can find a pillow and a tuning fork under it. More disappointment.

And finally, we can now go to the fish tank, use the poison on some meat we found in the pantry (hopefully, not human), and take the key. The little fish in the tank keeps swimming and there is no animation or message indicating that it works, but it does. And with the key we can open the strongbox to find… the magical pipe. And with that we finish the first set for now. In the next post, we will travel to the marvelous land of a really brown dungeon full of brown creatures. And some witchcraft.

COMPLETE MAP OF THE FIRST FLOOR: 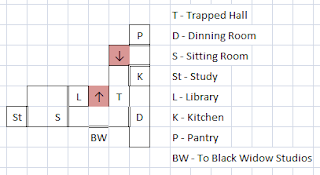 MAP OF THE BASEMENT: