King Graham of Daventry Journal Entry #2: "I've just seen enough sand to last many lifetimes and I have no desire to see even another grain of the accursed stuff – my first royal edict after I rescue my family will be to destroy all hourglasses in Castle Daventry. I scoured the desert for many miles, finding only a boot, a gold coin and a likely cursed bottle. But there is a silver lining - the gold coin has purchased information – information on my family's whereabouts. Just as importantly, I now have an item that I am certain will help me on my quest. I would love to use it immediately, but I am so very tired – it's likely the dehydration. So... very... tired...."

I don't think I can quite convey in words how boring this session was. It started well, it ended well, but the bulk of the 2 hours 20 minutes I spent was tedious busywork.

Before I continued, I loaded a previous saved game from before I bought the pie and tried using the silver coin on other shopkeepers – as this is an adventure game, the shopkeepers have limited inventory that you can actually buy - the tailor said that a silver coin wasn't enough for his blue cloak, and the toymaker requested a gold piece for his sled.

I did try the cloak in the inn, in case it was an invisibility cloak. It wasn't. I died. I reloaded.

I once again tried the haystack, thinking that something might be there after I did something elsewhere, and there was, or more to the point, I could get to it where I couldn't before.


They also do a great cover of "Smells Like Teen Spirit"

I never would have thought the ants would help me find a needle in a haystack. But hey, they found a golden needle, which, unsurprisingly, belonged to the tailor, who was easily convinced that his beautiful blue cloak would be a suitable finder's fee. It seems Graham is just as much Vito Corleone as he is king, trading favours for items instead of using cash or barter like a normal person. It was the tailor's needle in the first place – if I found somebody's lost stuff the most I'd accept in return would be a beer or a cup of coffee – and it wasn't like the tailor offered the cloak – Graham 'suggested' it. I know I wouldn't say no to a guy who's singlehandedly defeated a giant and a dragon.

When I tried to wear the cloak I was told the weather wasn't cold enough. My deductive skills determined that I will at some point in the game go to a cold area. But now, time to go to a hot area.

My next plan was to tackle the desert – seems simple enough. And it was – very simple, but very boring and time consuming. So how does the desert work? You can only go a certain number of screens before dying of dehydration.


Birds- lucky I can talk to animals - please Mr and Mrs Vulture, would you kindly bring me wate...wait...noaaaaaaaaahhhhhh.

There are a few locations that contain water. So it's a simple case of travelling a certain number of screens, mapping continuously. I did this for 40 minutes, finding nothing of interest apart from two oases, which I could drink from, and some tents, which were empty apart from a fast bandit and had a water jug outside for drinking.

Now that I write it, 40 minutes doesn't sound like too long, but 40 minutes of repetitive busywork seems longer than it is. At this point I'd searched 91 screens of desert, most of which you have to traverse multiple times to make sure you explore every screen on the off chance there's something useful there.

At this point, I made myself a cup of coffee – not because I was thirsty, but just to get away from the damn desert – if I weren't playing for this blog I'd have definitely downloaded a map from the internet before this point.


Coffee at the ready, I continued to map the desert. I found another oasis and a well - each time I found a new water source I despaired because it meant another bunch of screens I'd have to traverse.

I also found a skeleton with a boot, which I took.


Eventually I found a temple, where the first interesting thing happened - I died.


Hi. I'd like to ask directions to the nearest oasaaaaaahhhhh

I knew what I was supposed to do, but just hadn't done it fast enough. This time I hid behind the rocks and the bandits rode past me to the temple door, saying “Open Sesame” and hitting the door thrice with a jeweled staff. After they left I tried the same, banging with my fist as I had no staff, but to no avail. I'd clearly need a staff. Despite the game's attempt at dulling my brain for the last few hours, the answer hit me quite quickly – the empty tents from before. I returned to the tents (stopping twice for a drink, of course) and found them partying. The small tent had the staff in it as well as a sleeping bandit – I carefully snuck in and quietly grabbed the staff. Then I woke the bandit to thank him at which point he knifed me in the throat.

Excuse me sir, may I borrow this staaaaaaaahhhhhh

Okay, let's try again without being so polite. This time I snuck past the bandit instead. I went back to the temple and opened the door with my staff, which promptly broke. Inside I saw a single gold coin and a bottle near the door and a large amount of treasure at the back. I knew taking the large amount of treasure probably wasn't going to do much good but had to try...

Taking the gold piece and bottle, I left just before the door closed (I died the first time for taking too long to switch from the hand to the walking icon, but did it fast enough the second time)

Finally I went back to civilization leaving behind the awful desert.

Here's the full map of the desert – all 210 screens, including the 7, that's right 7, screens with anything other than sand in them – a whopping 3% of the screens are useful! The minimum amount of times you have to die if you guess correctly every time is 32. I likely died at least 50 times.


This whole desert sequence was just plain bad game design. The only way to be sure you've found every useful screen is to die 32 times, travel on 210 screens which all look the same, many of them multiple times, and there's absolutely no skill involved. It's all busywork. The fact that I'd clearly worked out the method a third of the way through and needed a break should be an indication that it went on way too long. Of course if there's a map in the game somewhere I've just wasted 2 hours and whinged unfairly on the game for this whole post.

Desert stats:
Total screens of desert: 210
Total screens with anything to do other than walk through it: 7
Percentage of useful screens: 3%
Minimum deaths required: 32
Time taken to do desert sequence: 2 hours 1 minute
Minimum number of screens required to traverse for full mapping: 300ish (stopped counting after 264 – took a guess)

Anyway, enough complaining about the desert, on with the rest of the game, which is quite fun.

Oh. Hi, Mr Genie. As for a wish, I don't need anything. Except this lamp, and the paddle game, and the remoaaaaaahhhhhh

Both the gypsy and the toymaker wanted my gold, but I figured I'd be leaving the town before needing a sled so gave the money to the gypsy. Seemed like a good decision as I got a cutscene...


I can escape if only next time he chooses paper

So, armed with more knowledge of Mordack the wizard (he's Manannan's brother and wants my son, Alexander, to turn his feline brother back into a human) and a new spell-repelling amulet, I'll start my next session by visiting the forest manwitch for some toad-reflecting action. Join me in a few days...

Note Regarding Spoilers and Companion Assist Points: There’s a set of rules regarding spoilers and companion assist points. Please read it here before making any comments that could be considered a spoiler in any way. The short of it is that no points will be given for hints or spoilers given in advance of me requiring one. Please...try not to spoil any part of the game for me...unless I really obviously need the help...or I specifically request assistance. In this instance, I've not made any requests for assistance. Thanks!

Save The Owls Fundraising 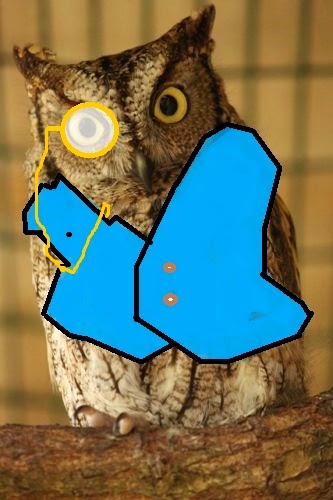 As detailed in the previous post and started by Joe Pranevich, anyone who mentions that they'll donate to an owl-related charity during the King's Quest V playthrough will get an as-yet-undetermined amount of CAPs.
Also, any adventure game companies looking for a new artist, I am currently available!
Posted by TBD at 23:00