Night 1 (continued): "The night wasn't through with me yet. After being hassled by the police, what could be worse than getting lost in the city. Luckily I met a friendly lady at Chiriga's. Unfortunately that luck turned when I arrived at her place. Something about meeting people at their apartments means bad news in this town." 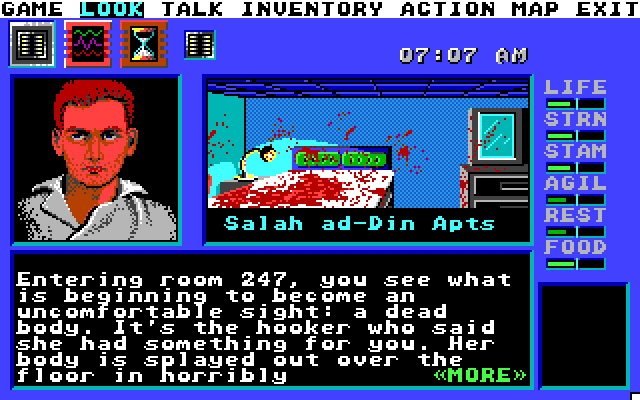 Each session will start and end at Marid's apartment. That's because it's the only location where I'm allowed to save the game. There's also only a single save slot, so there's no chance of keeping a backup game either. Guess I'll have to be sure of each action I take, lest it come back to bite me down the road. Since the police station is outside the city, I decided to stop by the morgue to see about getting Kenji's belongings. The morgue is described as an overly bright place that clashes with gloomy nature. The attendant keeps a watchful eye, and requires a police pass to gather up any belongings. 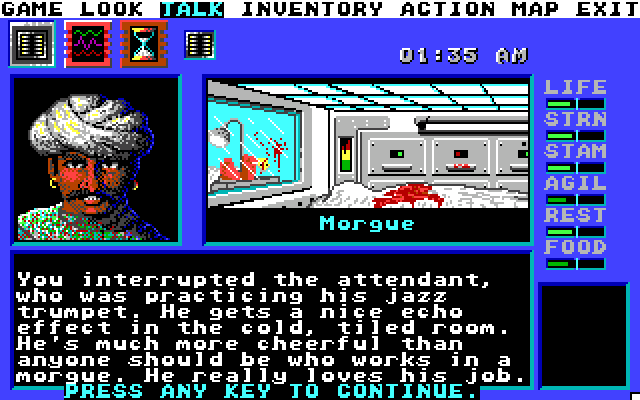 The lights aren't the only thing that clash here.

The police station is a short taxi ride just outside. As I enter I notice Bill idling illegally just outside as he waits to take me back. Lt. Hajjar is the only character around, and he pretends not to see me the first time I hail him. The good officer gives in eventually, passing along the answering machine chip, but fails to disclose what's on it. He mentions the rest was waiting at the morgue. I had to press him further to get a police pass, and asking anymore questions was pointless after that. We're on the same side this time, but he definitely doesn't wish it was that way. 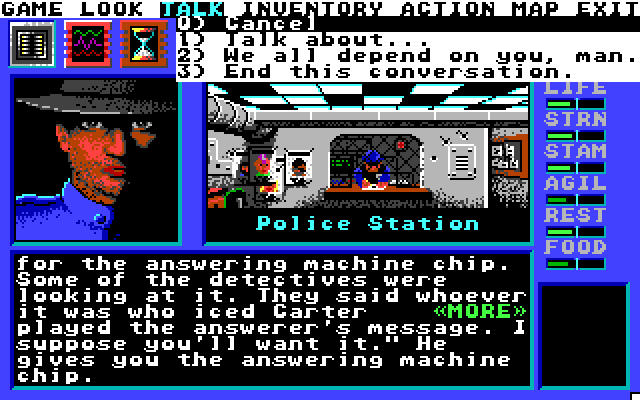 Wouldn't the 'answerer' be the machine?

Back at the morgue I picked up Kenji's effects: a tattered wallet that held a pawn shop ticket and a holodisk. All are currently dead-ends. I don't know how to listen to the answering machine chip, I've failed to find a way to play the holodisk, and Mustafa's Pawn Shop appears to be permanently closed. Visiting the shop suggests someone, somewhere, may know what happened to the shop, but gives no clues as to who. At least I got one break during the night. I decided to stop by Chiriga's and ask about everything I had on me. Before I left empty handed, I only asked about MCDIX as a last resort. 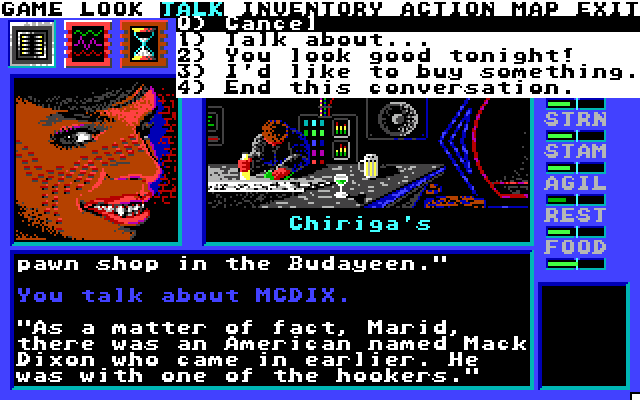 This seems more like a coincidence, but it's the best lead I've had all night. 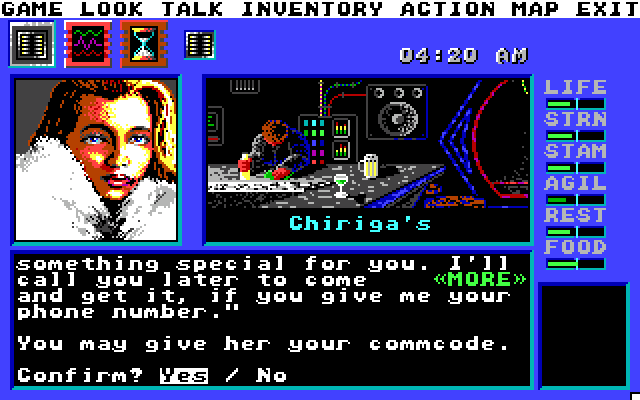 A beautiful woman asks for your number, you give it to her, right?

So, the killer may or may not be Mack Dixon. At the very least it was a person of interest. I guess it's one more thing to randomly ask of people as I shove the pawn ticket and holodisk in their face. I also asked about Holodisks from Chiri, and she suggested an adult holovid store. Speaking of randomly asking for people, I decided to head back to Kenji's apartment. Maybe the police left behind the answering machine I could use to play this chip on. Seemed promising. 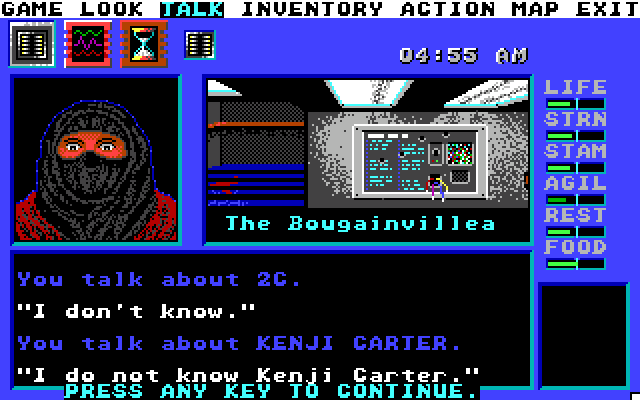 You were his landlord! You know, the dead guy from earlier...

Holovideos are a small, thin silver disk, about three inches in diameter. It's used to store animated holograms, often accompanied by short audio. In the center of the disk are two small holes that stabilize it in the viewing device. I arrived at Adult Video Holos ready to watch the one I already had in hand. Hologames and More had shut down, so this was the only place I found that had "holo" in the name. For the life of me I could not figure out how to use the viewers in the booths to play this movie. Upon entering I'm given the option to rent a video and time in a booth. After that's done I have the option to watch the video or not. No mater which options I go through though I can't put the holodisk in my inventory into the viewer. 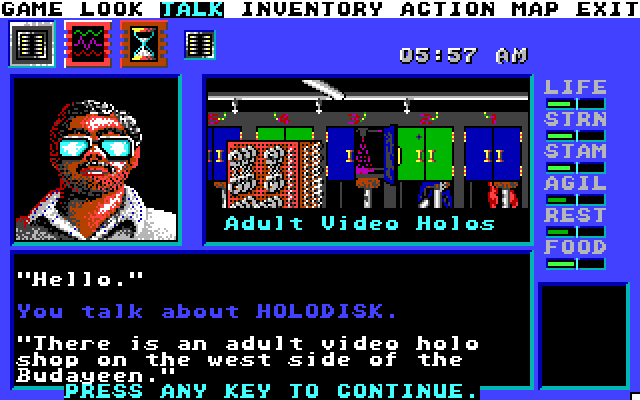 Any chance I can get directions to here? 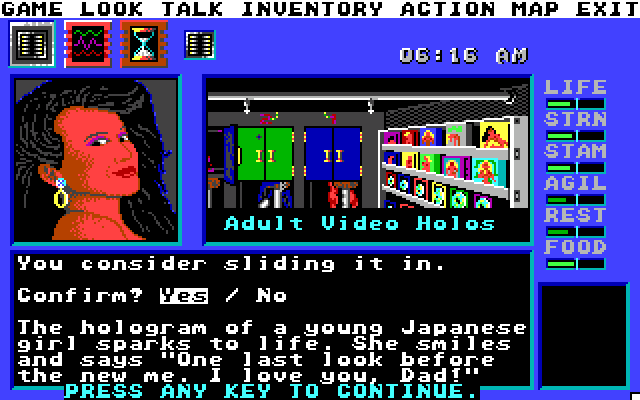 Yes, I do mean all the options, and yes, that's as far as it plays.

It's hard to believe I've gotten nowhere with any of my leads. I can't even figure out how to watch the holodisk after I've watched a different holodisk... I'm not sure I can deal with this game. At least the story seems to keep moving on its own. After spending way too much time trying to get anywhere with my current inventory, I received a call from that girl I met earlier. She wanted me to come over to her place for a chat; said she had something for me. 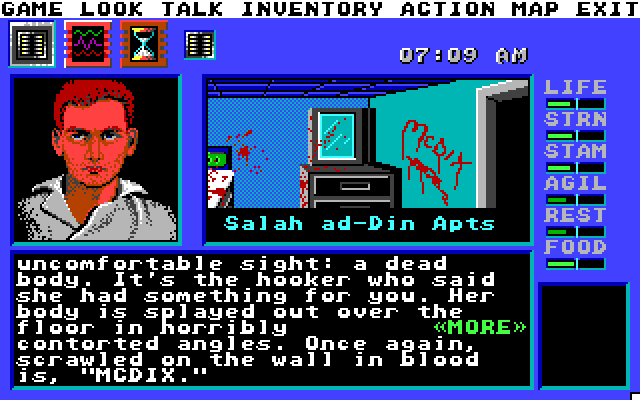 The poor woman didn't stand a chance. The scene goes into quite a bit of detail. Strangled from behind, stab marks that look like they were made by an icepick. Same weapon used on Kenji. There was a photograph next to her. Careful not to touch anything, I was able to see it was of Kenji Carter. What was the connection? I looked around further and noticed a samurai tattoo on her arm with the initials "KC" under it. As I pondered how the two knew each other, the game surprised me more than it had with the holodisk fiasco. 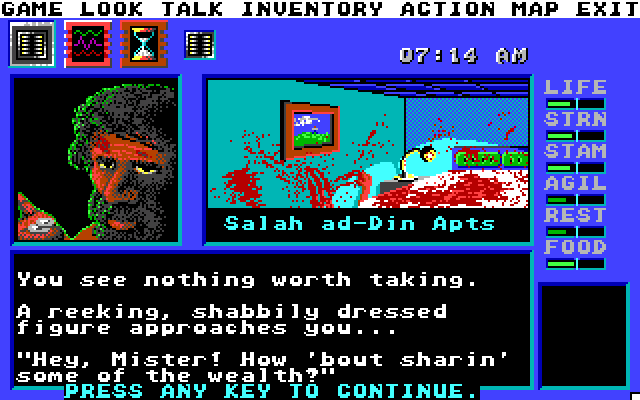 I see you're probably robbing the place, can I have a bit of that action? 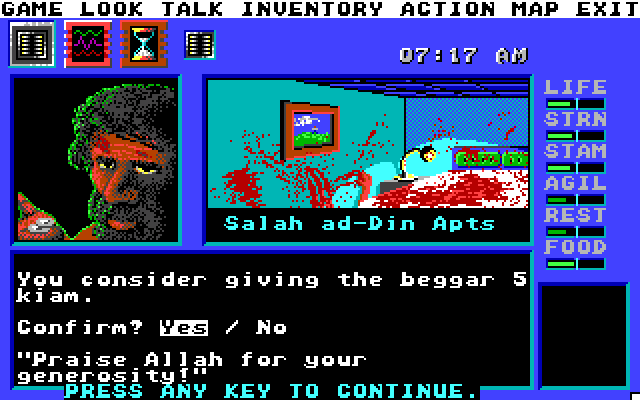 Little did I suspect Mack Dixon would pose as a street beggar.

Seriously, a random NPC encounter in the middle of investigating this mess? Also, how does the body get to one end of the room after writing "McDix" in blood on the other side? I don't know if that's an intended inconsistency, or just poor design. Based on the rest of the game so far, I'm leaning towards the latter. With little left to do, I left. Marid comments on how the police arrive just as he leaves, and how he is glad not to get wrapped up in another "McDix" murder. Who called the police in the first place? I'm definitely out of leads. Sorry for the overall delay. Been dealing with a heavy workload this week, and I had planned to get this out last week, but ended up catching the flu. I'll post in the comments if I end up running around in circles for more than a couple hours and need some assistance. Hopefully it won't come to that on my very first game for this blog.

Note Regarding Spoilers and Companion Assist Points: I've written a set of rules regarding spoilers and companion assist points. Please read it here before making any comments that could be considered a spoiler in any way. The short of it is that no points will be given for hints or spoilers given in advance of Zenic requiring one. Please...try not to spoil any part of the game for him...unless he really obviously needs the help...or he specifically requests assistance. In this instance, he's not made any requests for assistance. Thanks!
Posted by The Trickster at 23:00