Quick note from The Trickster: Since there's no possible way that I could play every adventure game ever made (any questions, speak to my wife), I've decided to implement a new feature. For any game rejected from the playlist, a companion can volunteer to play through it and send through posts to go up on the The Adventure Gamer. Zenic Reverie is the first brave adventurer to give this a go, with 1990's Circuit's Edge. This game was released between Conquests of Camelot and Earthrise, which is why we're doing this now, but I'll be playing through Earthrise at the same time. It should be an exciting and active time here, just in time for the festive season! As usual, feedback is welcome. The blog is and always will be about the readers. As a final note, you can assume everything in these guest blogs are straight from the guest, unless otherwise stated. In this case, the caption comments below are mine. So we begin a new era... 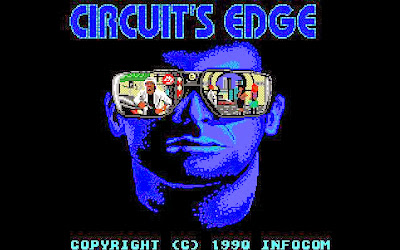 Marid wears his sunglasses at night so he can, so he can...

Hello all, I'm ZenicReverie, and I have the pleasure of presenting Circuit's Edge: an adventure-RPG hybrid initially rejected by The Trickster's criteria. The game was developed by Westwood Associates (later renamed Westwood Studios), and published by Infocom. Infocom by this time was little more than a shell of its former glory, nothing more than a publishing label used by Activision for its name recognition. Infocom, the development studio, was sold to Activision in 1986 after a bad investment in a piece of business software. Activision's strict requirements of the studio forced Infocom to release games before their time. In 1989, Infocom was moved to California, and into its new role as a publishing arm of Activision. They had a close relationship with newly budding development studio Westwood Associates. For anyone that also follows CRPGAddict, you should recognize the developer of such classics as BattleTech: The Crescent Hawk's Inception and Mines of Titan, a pair of games that fell short during their finales. Let's hope for a more complete experience with Circuit's Edge. 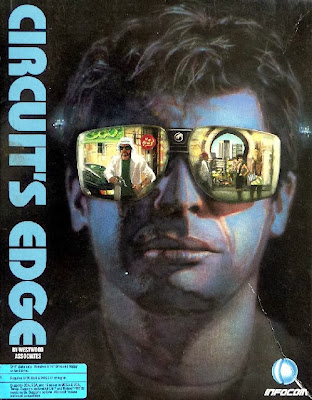 I think this is quite a cool cover. It manages to bring to mind the world of secret agents yet with a cyberpunk feel.

This game won't be the only time Westwood dips their toe in the adventure genre; previously focused on RPGs at the time and RTS shortly after, an adventure game doesn't seem too far from the mark. Still, they're best known for their Command & Conquer series released under Westwood Studios, but other notable titles are Lands of Lore, Eye of the Beholder, and Dune. Looking ahead we see The Legend of Kyrandia series, which have all been accepted onto Trickster's main list. It gives hope that this game isn't only an adventure in name alone. 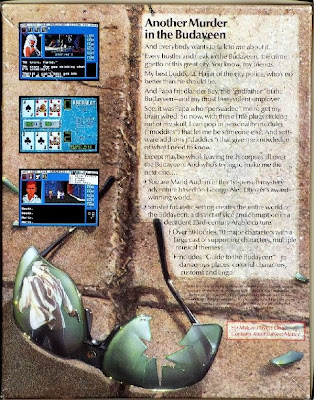 Zenic, you better not smash those shades! We have a limited budget for this project!

Circuit's Edge is based on When Gravity Fails, a cyberpunk/sci-fi novel by George Alec Effinger. Based on the author profile and personalized introduction from the author it appears he was closely involved in the adaptation of the story. The manual, which I helpfully found at Museum of Adventure Game History (http://mocagh.org/) has a guide to the local characters, locations, and a glossary of terms compiled by Mr. Effinger, which I'm sure I'll need to reference. Both the game and novel follow the exploits of Marid Audran as he survives day-by-day in the seedy underbelly of an unnamed city somewhere in a Middle-Eastern backdrop. The area of the city where the action takes place is called The Budayeen. It's described as an entertainment district where anything goes. Marid is a freelancer employed by the local "godfather" known as Papa who convinced Marid to get his brain wired to accept personality mods and soft skills. Now, before we get to comparing this to Neuromancer, there doesn't appear to be any matrix to jack into. 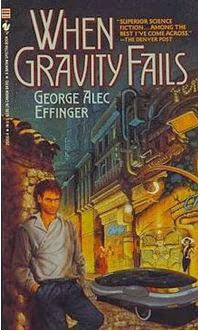 I'm pretty sure we'd all be screwed!

Note Regarding Spoilers and Companion Assist Points: Please note that the same rules regarding spoilers and hints that apply to games The Trickster is playing through apply to games guest bloggers are playing through. CAPs will be awarded for required assistance and taken away for any unrequested spoilers not in ROT13. Finally, since this is our first guest blogger, we're also having a guest sponsor! TBD has generously offered The Secret of Monkey Island from Steam to anyone that can predict what score Zenic will give Circuit's Edge.
Posted by The Trickster at 14:39