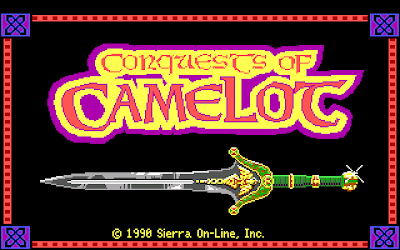 If it has swords, then it must be good...right? 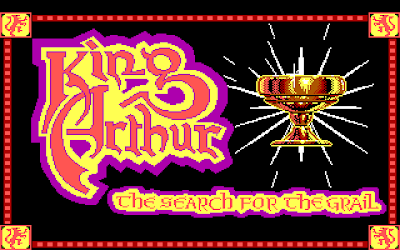 Wait...what's this? A second title screen??? How very greedy!

Here we are at the first Sierra game for 1990! It’s one I’ve not played before too which has me excited. Conquests of Camelot: The Search for the Grail is listed on some sites as having been released in 1989, while others say 1990. The game files of the version I have are dated 24th of March 1990, so that’s where I’ve chosen to include it on the playlist. Conquests of Camelot is the first of two games designed by Christy Marx with the help of her husband Peter Ledger, with the second one being Conquests of the Longbow: The Legend of Robin Hood in 1991. Christy is a writer for television, film, animation, books, comic books, graphic novels, manga and of course videogames. In fact, I've just discovered that Christy played a big role in my childhood, having written episodes of Spider-Man and His Amazing Friends, G.I. Joe and Teenage Mutant Ninja Turtles. From what I can tell, her work for Sierra was her first in the gaming industry, but she’s gone on to be involved in many notable MMORPGs (such as The Matrix Online, Myst Online and Earth & Beyond) and a couple of Lord of the Rings related console games (The Lord of the Rings: The Two Towers and The Lord of the Rings: War in the North). She designed Conquests of Camelot from writing and structural points of view, while Peter designed the visuals. This certainly isn’t the first time we’ve seen husband and wife join forces to make an adventure game (hi Corey!), nor will it be the last. 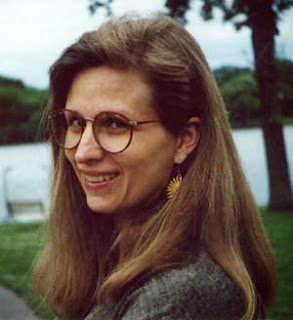 Christy Marx: Entertained males in a more morally decent way than Christy Mack (if you don't know, don't Google it!) 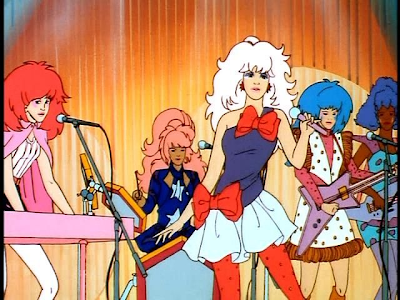 Oh, and she also created this little Jem, although I never watched it. Well...I may have a little bit.

Sierra already had a history of applying their adventure game engines to different thematic genres (think Police Quest, Space Quest, Leisure Suit Larry, Manhunter, Gold Rush!), and Conquests of Camelot: The Search for the Grail continued this trend. Sure, King’s Quest and Hero’s Quest had delved into fairy tale and fantasy based medieval worlds, but this game would be set in the medieval world we know from history. That’s not to say that it’s purely historical! After all, the story of King Arthur and The Holy Grail has more fictional leanings than historical ones (there’s no definitive proof that he existed at all!). I think the game manual’s introduction, written by Christy herself, describes what they set out to do better than I could: “The trick with writing a story or game based upon a popular set of legends is to walk that thin line between tradition and originality. What I’ve striven to do with this game is to balance history and myth, fact and imagination, entertainment and information. Rather than adhere slavishly (and boringly) to specific stories, I drew upon the essence of the Arthurian legends and other mythologies to create a blend which I think will challenge you and entertain you at the same time.” This sounds great to me, as I love a bit of education with my entertainment, but of course I have no idea how successful they were at this point. 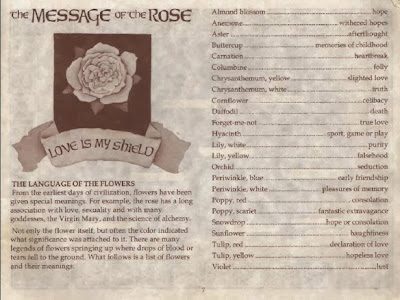 I assume all this info will become important at some point.

Speaking of the manual, it has the title Liber Ex Doctrina, which I just had to look up. It seems it can be read in two different ways, depending on how you translate the Latin. The word “liber” can be interpreted as either “book” or “free”, so the title can be read as either “Book from Knowledge” or “Free from Doctrine”. Regardless of what the title means, the book is a pretty fascinating read. I don’t know how much of it is relevant to the game itself, but there’s a lot of information about King Arthur, the Grail, the “Language of the Flowers” and various Goddesses, before it eventually gets down to telling the player how to actually play. Most of the remaining pages cover the basic Sierra adventure game mechanics that we’re all used to, but one particular part stands out as important. There’s a whole section on how to fight successfully in the game, with each of the number pad keys producing a different action (Great High Blow, High Parry, High Attack, Retreat etc.). I hadn’t been aware that there was combat element to Conquests of Camelot, so it will be interesting to see how it compares to the one in Hero’s Quest. There’s also a map entitled “Europe & the Middle East”, which is most appreciated by the geographically retarded (ie. me). It should at least help me get my bearings while playing. 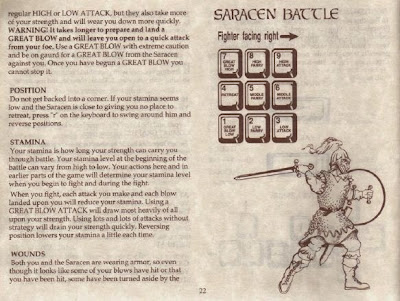 What would a medieval game be without a good fight in armor!?

It’s worth noting that Christy and Peter were not the only people involved in the creation of Conquests of Camelot. David Slayback (Police Quest II) was the Lead Programmer, assisted by Robert Fischbach (Police Quest II & Hero’s Quest), Doug Oldfield (Space Quest III & Codename: ICEMAN), Jerry Shaw (Police Quest II & Hero’s Quest) and newcomer Eric Hart. The game’s sound and music were once again created by the legendary Mark Seibert. From what I’ve read, he made a real attempt to make authentic-sounding medieval music for it, which is cool. As mentioned earlier, Peter designed the games art style, but he also had a role in animation, backgrounds, and even the very nice box artwork! Conquests of Camelot appears to have been his first and last Sierra game (it’s a bit surprising to see that he didn’t work with Christy on the sequel). The other animators were Douglas Herring (Larry II & The Colonel’s Bequest), Kenn Nishiuye (Hero’s Quest & Codename: ICEMAN) and newcomers Andy Horos and Jennifer Shontz. Finally, Peter received help on the backgrounds from Douglas Herring and Julian Ledger. This appears to be the only game Julian was involved in, and I can’t help wondering whether he’s the brother of Peter or at least a relative. Anyway, I’ve downloaded a copy of the game, and after finally learning my lesson, will be playing it in DOSBox. Will there be any other Grail hunters? If I find it first, I can’t promise I’ll share! 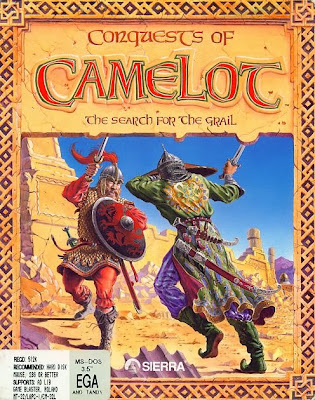 This is one of the better covers we've seen so far. A nice action shot that promises the player some serious medieval adventure!

Note Regarding Spoilers and Companion Assist Points: There's a set of rules regarding spoilers and companion assist points. Please read it here before making any comments that could be considered a spoiler in any way. The short of it is that no CAPs will be given for hints or spoilers given in advance of me requiring one. As this is an introduction post, it's an opportunity for readers to bet 10 CAPs (only if they already have them) that I won't be able to solve a puzzle without putting in an official Request for Assistance (see below for an example bet). If you get it right I will reward you with 30 CAPs in return. It's also your chance to predict what the final rating will be for the game. Voters can predict whatever score they want, regardless of whether someone else has already chosen it. All correct (or nearest) votes will go into a draw.

Extra Note: Once again, Lars-Erik will gift the next readily available game on the list to the reader that correctly predicts what score I will give this game. So, if you predict the right score (or are closest), you will get 10 CAPs and a copy of the King's Quest Collection from Steam (which includes Roberta Williams' King's Quest I: Quest for the Crown). How good is that!? Good luck!
Posted by The Trickster at 22:07

Email ThisBlogThis!Share to TwitterShare to FacebookShare to Pinterest
Labels: 1990, Conquests of Camelot: The Search for the Grail, Introduction, The Trickster