It’s taken me a bit longer than I would have liked to get to this final rating post. The reason for that is one to be happy about though, which is I’m desperately trying to get all my work done so I can have the entirety of January off! Anyway, I’ve been looking forward to finding out whether Hero’s Quest can top The Adventure Gamer leader board, so I’ll waste no further time...

Puzzles and Solvability
It’s strange really, but for an adventure game of such high regard, the puzzles are really not the game’s high point. There not particularly difficult, with the majority of them being pretty darn obvious. Brauggi demands handfuls of fruit. Go buy handfuls of fruit and give it to him! Much of the game revolves around a dispel potion, and the ingredients for that are pretty easy to find and collect also. With Hero’s Quest, it’s more about the journey than the destination though! What you need to do might generally be obvious from a puzzle point of view, but gaining enough skill to do it is where the fun is to be found. That’s why I consider the game to be a true RPG / adventure hybrid, despite the wrappings being very much in the typical Sierra adventure game mould. 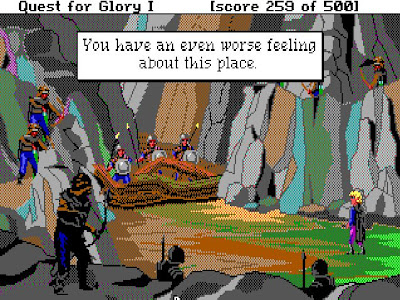 Even once you figure out how to get past this scene, you still have to have the skill to do it

I can’t discuss puzzles without mentioning the replayability of the game. Being able to play the game as one of three character classes, or a hybrid of them, means the game can be played over with totally different solutions. Playing as a thief or magic user means you have to think very differently than you would as a fighter, and while the plot is generally unaffected by these distinctions in the game, it’s a pretty cool way to give the game some longevity. I do have to mention that the character class puzzle solutions system does have an unfortunate result, and I think I experienced that a lot due to choosing a pure fighter class. A lot of puzzles were solved by brute force or by throwing things, simply because those were the skills and attributes my character had. “If all else fails, throw some rocks” worked more often than not, which wasn’t as satisfying as it could have been. I also should mention that the scenes leading up to the climax were more about trial and error than logical deduction, which is not ideal.
Rating: 7 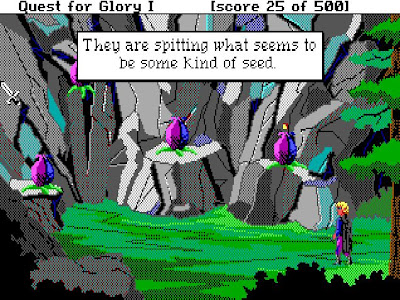 How to get that seed? Oh I know! I'll throw a rock!

Interface and Inventory
Hero’s Quest adds some nifty new features to this category, and they're all handled pretty well. The RPG aspect of the game demands a character statistics screen, and the one here has everything you would want it to and is easy to navigate. The addition of coloured numbers to emphasise the statistics that have changed since the last time you visited the screen is also a welcome feature. The inventory also requires some additional attributes to meet the hybrid nature of the game, with money and total item weight sections included. It all works well enough without demanding much further discussion. 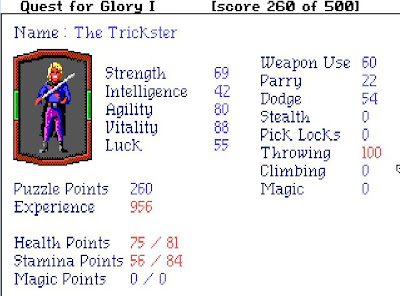 Not the type of screen normally associated with adventure games

Movement in the game is handled as you would expect for an SCI0 adventure game, yet I don’t recall getting stuck or frustrated at any stage during the game (which can’t be said for Codename: ICEMAN!). Similarly, I can’t recall fighting with the parser very much, with the great descriptions on each screen giving you no need to guess item labels, and the parser itself not being limited to only precise wordings. I have to admit (and I hope this doesn’t turn out to be embarrassing), but I figured out after playing the game that I could right click on anything on the screen and be given a description of it. Has that feature been in previous games and I just didn’t know? 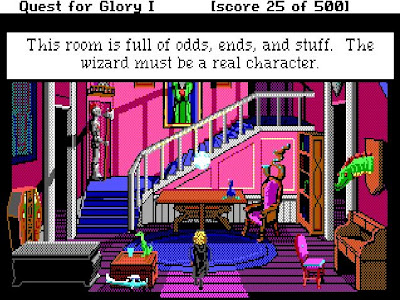 Not even Erasmus' stairs could halt my progress

Of course, the fighting sequences are a new addition, and require some focus. I have to admit that I really struggled with this part of the game during my first few sessions. Not so much because it wasn’t intuitive, but more because it simply wasn’t effective. I couldn’t be reactive at all and was forced to guess when to dodge and when to attack due to the high speed at which the enemies were attacking me. However, once I played around with the speed settings of the game (not enough to make battle too easy), the fights became very enjoyable. The more skill my character gained, the easier fighting was too, which really highlights how well executed the RPG elements are. Overall, the interface of Hero’s Quest is not highly advanced, but it’s extremely slick and professional, giving the player little reason to think about movement and commands, and more reason to just enjoy themselves!
Rating: 7 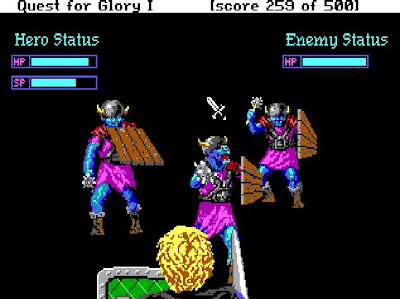 They even dealt with multiple enemies, albeit in a rather primitive way (one at a time)

Story and Setting
As with a lot of games from this era, the story is a very simple one. The setup it totally contrived, right down to the only exit from the valley being blocked by a snowstorm, and the game purposely steals clichés from other similarly themed stories. It’s pretty comparable to King’s Quest, although Hero’s Quest takes more of a classic fantasy approach (monsters, treasure, quests) than the fairy tale approach found in Roberta Williams’ series, which is definitely more to my liking. However, while the story itself is nothing to get excited about, the little (often humorous) details that flesh it out and the many unique characters the player meets on the way make the whole thing feel much more interesting. I guess it’s also worth pointing out that RPGs often have very thin plots, which is necessary to give the player freedom to forge their own path. I can’t say Hero’s Quest can completely use this as an excuse, but it definitely stops me from being too harsh.
Rating: 5 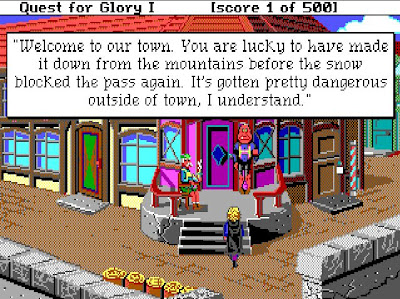 Snow you say? Looks like a pretty fine day to me!

Sound and Graphics
While the sound effects of the game are merely on par with other recent Sierra games, Hero’s Quest has hands down the best music of any game on the list so far. At first I thought that belief might have more to do with nostalgia than actual quality, but over time I have realised just about every tune in the game gets stuck in my head due to how catchy and entertaining it is. Even right now, days after I last played the game, the various tunes of Erana’s Peace, the goblin training ground, Baba Yaga’s hut, and most of all the battle music, are running through my head. The main theme itself was not as iconic as I remembered, but that I assume is because my more recent experiences with it came from later games in the series, where the sound quality was far superior. 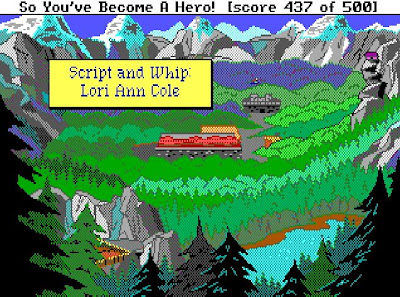 Apart from the overuse of pink, which I think is supposed to be purple and merely looks pink in DOSBOX, the graphics are also really great for the time. They outdid King’s Quest when it comes to fantasy scenery (the healer’s house, the Dryad, Erana’s Peace and the Mirror Lake are all very attractive indeed) and some of the darker scenes are very effectively done also. Most of all though, it’s the animation where I feel the game forged new ground! There is a lot of scripted action in the game, much of which involves the main character performing arrogant flourishes and bows, and they’re all very convincing and smooth. The combat scenes don’t have the same silky feel to them, but the enemies are given good presence and expression-filled character (I believe they were created through using built models?) All up I’d say the game is not quite up to Lucasarts’ high visual standard, but easily makes up the deficit through the wonderful music by Mark Seibert.
Rating: 7 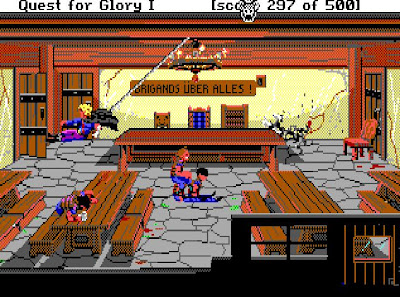 The action scenes are really convincing and often humorous

Environment and Atmosphere
This is another area where Hero’s Quest excels. The environments within the game are reasonably varied, and all of them are memorable. I’ve mentioned it many times already, but there’s just something really beautiful and magical about many of the locations found in the game, and the generated atmosphere is delightful. The game has a very open feel, and gets the balance spot on between making the player wander aimlessly through endless bland landscape and feeling like their part of a largish game world. That game world is packed with the unexpected, with too many strange creatures to mention here. It’s these inhabitants that really give the game it’s character, with residents like the Meeps,  the Antwerp, Baba Yaga, ‘Enry the ‘Ermit, Yorick and the Fairies all gaining a firm place in adventure gaming history.
Rating: 8 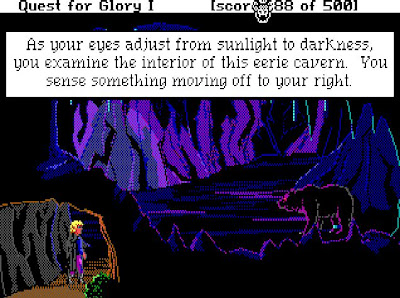 Yet another scene dripping with atmosphere

Dialogue and Acting
Of course none of these characters would be all that memorable if it weren’t for the dialogue attributed to them. The variety of accents, intelligence levels, rhyming tendencies, senses of humour and mysteriousness make each and every one of them stand out from the rest. There’s actually a lot of dialogue in Hero’s Quest now that I look back at it, and it’s consistently charming and appropriately descriptive. Once again I have to highlight the sheer professionalism that comes through in the game, right down to the dialogue having no spelling or grammatical errors, and always being positioned in the most ideal place to limit instances where it overlaps the items or events it describes. I guess I still can’t pass the 6 mark though, as adventure games have a long way to go on this front.
Rating: 6 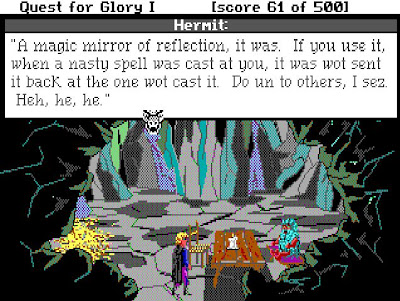 So there you have it! The game comes in at 67, and I’m going to throw another point at it just because I can. I love this game and am thrilled to find it leading the pack by a whole 6 points. I have a feeling the next game on the list (Emmanuelle) won’t be threatening Hero’s Quest’s place at the top. 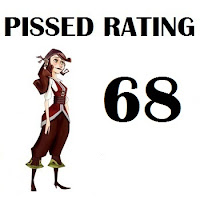 ﻿
It's time to go see who wins a copy of Indiana Jones and the Last Crusade! The answer is Fenrus! Congratulations! Send an email to theadventuregamer@gmail.com and I'll respond with the neccessary details.

20 CAPs for Lars-Erik
* Sponsor Award - 20 CAPs - For sponsoring the blog with free games!

20 CAPs for Andy_Panthro
* Companion Award - 20 CAPs - For playing along with me and completing the game with complete 100 stats!

10 CAPs for Novacek
* Riddler Award - 10 CAPs - For deciphering the last of the mixed up adventure game characters
Posted by The Trickster at 23:12

Email ThisBlogThis!Share to TwitterShare to FacebookShare to Pinterest
Labels: 1989, Final Rating, Hero's Quest: So You Want to Be a Hero?, The Trickster