Horror video games have always been a thing. They can be traced back to as far as 1982 for graphic horror games with 3d Monster Maze and probably before that with text adventure games that I don’t know about. A lot of them rely on jump scares (Five Nights at Freddy’s, I’m looking at you) but few dabble with psychological horror, at least before the technology was really able to plunge you into horrific universes and bring you games you don’t want to play alone at night like Amnesia or Fatal Frame. Introduce the game that was ranked 6th of Gametrailer’s “scariest video games of all time”, despite being the oldest one of their selection: Dark Seed. 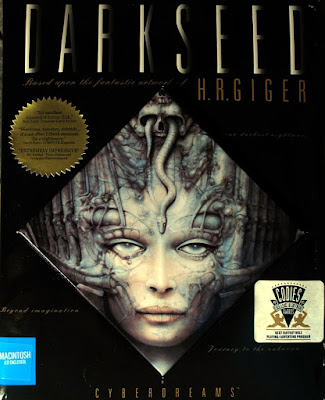 H.R Giger has always been a fascinating artist. His most recognised work is obviously the design of the creature of the Alien series, which allowed him to net an academy award, but his work goes way beyond that. Born in Switzerland in 1940, he has always turned around the surreal and macabre. He has worked on the unfinished adaptation of Dune (hey, what a nice link to another game that has just been played on the blog!) from Alejandro Jodorowsky between 1975 and 1977 before being approached by Ridley Scott for Alien. He also worked on many other films after that, most of them were unfinished or where his participation was diminished (like Potergeist 2 where his work was cut for budget issues or Species where the use of clean 3D images prevented him from achieving his visions). The work of Giger is biomechanical, grey and disturbing, and he’s definitely one of the main horror artist of the end of the 20th century.

Influence of Giger’s work over video games is also easy to find. One can feel that every time a developer had to create a dark and ominous alien civilization, his work tend to reference H.R Giger in some measure. Just look at the Contra or R-Type series. There is even one chunk of level in Streets of Rage 2 that include biomechanical design and Alien-like creatures. I’m pretty sure I’m forgetting a lot of other examples, but needless to say that Giger and his creatures have always been more or less around in the history of video games.

When Cyberdreams approached Giger in order to create the art for their upcoming horror video game, one of his conditions were that the game had to be made in high resolution (640x480), and in order to achieve that, the game designers had to reduce the color palette from 256 colors to a mere 16, giving the game its grey tint and getting it even closer to Giger’s other works.

The game follows the story of Mike Dawson (also the name of the lead designer...) in his town of Woodland Hills (also the name of the neighbourhood of the game company) finding a passage to a weird alien world (the Dark World) right in his own home. Along with Alone in the Dark that we’ll review later in the year, Dark Seed is one of the first major attempts at creating an interactive horror world and immersing you into it. The characters in the game are made of digitized actors which (probably partly thanks to the limited palette) don’t clash too much with their surroundings, and the use of the upscaled resolution also helps to create a realistic and nice-looking game.

Cyberdreams went on to develop a sequel in 1995. The same year, the developers went on to create another excellent horror milestone, I have no mouth and I must scream, based on Harlan Ellison’s work (and benefiting from his input as well). Their other credits include CyberRace, a mediocre Wipeout clone, and Noir : A Shadowy Thriller which I’ve never heard about before but seems pretty interesting and has a stunning visual style. We’ll come to it eventually and see if it’s a hidden gem or deserved to disappear in oblivion like that.

Dark Seed was released for PC, Mac, Playstation and Saturn in 1992. I haven’t tried the console versions, but I’m guessing they are hard to play because of the controller input and horrendous loading times. There is also another very surprising port of the game. On his fabulous website Hardcore Gaming 101, Kurt Katala shows screenshots for an unofficial Famicom port that’s really an interesting and ugly take on the game. I’ll try and look into it if I can find a playable version after playing through the game.

However, everything I’ve read online tends to show that the game design is not on par with the visual high quality, with a game that seem to run on a strict time limit (foreshadowing many save/restore and walking dead scenarios…) with obtuse puzzles and pixel hunting… Anyway, I’m still looking forward for this game if only because of its fascinating ambiance and mature themes… I’ll tell you in a few days if my motivation is still intact of has been crushed by the upteenth game restart.