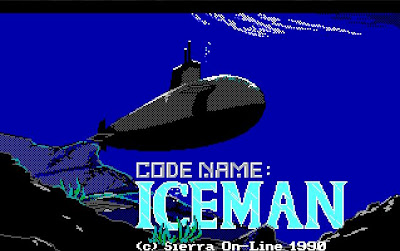 I can't help but notice it says 1990 on the bottom of the title screen, but every site I go to suggests it was released in 1989.

If there was any doubt that 1989 would be another year of Sierra adventure games, let me squash that right now. While 1988 had five games from the genre giant, the year ahead will have no less than six, with Codename: ICEMAN being the first cab off the rank. There’s something I should mention though before I begin my usual introduction, and it relates to the order in which I’ll be playing the games. As it can be very difficult to find out exactly when games were released, particularly when they were released in pre-internet days, I’ve been playing through each year’s games in alphabetical order. In this instance that means I’ll be playing Codename: ICEMAN first when it was actually released last. Here’s a list of the SCI engine Sierra games in (from what I can tell) was the order they were released to the public in 1989:


Space Quest III: The Pirates of Pestulon
Hero’s Quest: So You Want to Be a Hero
Leisure Suit Larry 3: Passionate Patti in Pursuit of the Pulsating Pectorals
The Colonel's Bequest
Codename: Iceman

The more observant among you may have noticed there are only five games in that list, and that’s because Manhunter 2 was also released in 1989, despite still being built on the old AGI engine. I have no idea what month that game came out and therefore have no idea where it really fits into the timeline. Why do I mention all this? Well, since quite a few Sierra employees are connected to many of the above titles in various ways, it’s safe to assume that there would be some sort of progression in the application of the technology. With that in mind, I guess it would have been nice to play the games in chronological order. I may incorrectly state that Codename: ICEMAN was pioneering in some way, only to find out later that one of the games created earlier had already included that element. When I reach the next “The Year Ahead” post, I plan to at least attempt to put the selected games in chronological order rather than solely alphabetical. 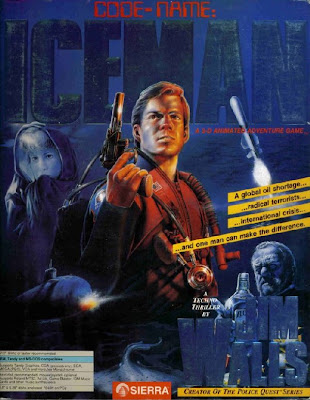 A fairly inviting cover, but who thought putting blue writing on a blue background was a good idea?!

Enough small talk, let’s get on with the show. Codename: ICEMAN is certainly not one of the most well known Sierra efforts, and from what I can tell, it’s also not one of the most loved. I’ve not played or even seen it before, so I can only hope that it connects with me in a way that it didn’t with players of the day. It’s probably most renowned for being Police Quest designer Jim Wall’s first attempt at making a game outside of the series he brought to life, and also for having a large portion of the game take place in a submarine. Just like the previous game’s Jim had worked on, Codename: ICEMAN takes a semi-realistic approach, demanding the player follow strict protocol if they are going to be successful. It appears to be the submarine simulation sections that left players feeling disgruntled, so it will be interesting to see how my experience is affected by them. 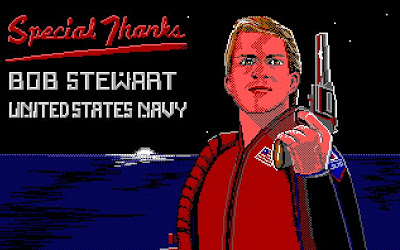 No that fine looking action man is not Bob Stewart. That be me!

Most interestingly, since Jim had no Navy experience to go with his vast Police force knowledge, he called on Naval Officer Bob Stewart to make sure the details and protocol were as close to reality as the game mechanics would allow. Programming was handled by Pablo Ghenis (who was one of the designers of the SCI engine), J. Mark Hood and Doug Oldfield, all of whom would go on to have a hand in many future outings. Jeff Crowe, Gerald Moore, Kenn Nishiuye and Cindy Walker were all part of the graphics team, just as they were on Hero’s Quest earlier in the year. Finally, Mark Seibert once again handled the music, which is no surprise since he seems to have done so for just about every game the company developed in this era (including Space Quest III, Hero’s Quest and Leisure Suit Larry III , all made in 1989).

I’ve got my hands on the game (which I’ll be playing through DOSBox), the original manual, as well as a submarine navigation chart that came with it. It’s all pretty scary to be honest, and it doesn’t fill me with confidence that I’m going to enjoy this much. The manual launches straight into detailed protocol that I assume must be followed precisely, and the submarine control panel descriptions seem incredibly complicated. If I have to know even a quarter of this stuff to play the game I’m going to have my head in the manual almost permanently. There’s no mention of my character’s background or any events that have recently taken place, so I assume everything will be revealed once I start playing. Finally, I uncovered one page of a Codename: ICEMAN comic online, but I’ve not been able to uncover the rest. If anyone can do it, I’ll be generous with the CAPs. “Attention on deck!!!!” Oh crap, I’ve gotta go! 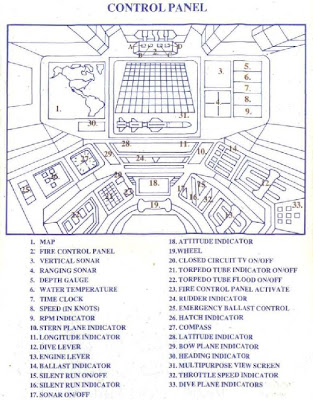 This is the sort of thing I expect to find in simulator games, and it's also why I don't play them.

Note Regarding Spoilers and Companion Assist Points: I've recently written a set of rules regarding spoilers and companion assist points. Please read it here before making any comments that could be considered a spoiler in any way. The short of it is that no points will be given for hints or spoilers given in advance of me requiring one. As this is an introduction post, it's an opportunity for readers to bet 10 points (only if they already have them) that I won't be able to solve a puzzle unassisted (see below for an example). If you get it right I will reward you with 40 points in return (it's going to keep going up until someone beats me)! It's also your chance to predict what the final rating will be for the game. Multiple readers can predict the same score, but will be rewarded a decreasing amount of points if it turns out to be correct.

Extra Note: Once again, Lars-Erik will gift the next readily available game on the list to the reader that correctly predicts what score I will give this game. So, if you predict the right score (or are closest), you will get 10 CAPs and a copy of the Quest for Glory collection from GOG! Good luck!